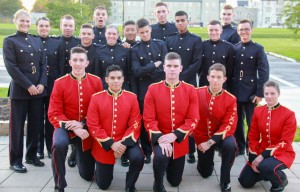 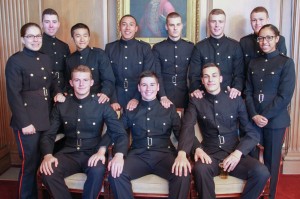 The Week that Was

The A & B Division Mess Dinner, on October 7th, was hosted by the A Division Commander, Major Bradley. First Year Cadets from both divisions, their FYOP staff and some of the Training Wing Staff attended the dinner, along with the Guest of Honour, Major Muralt, who used to be the B Division Commander. A few cadets expressed their views regarding the Mess Dinner:

The A & B Division Mess Dinner held earlier this week proved an excellent opportunity for initial exposure to some of the more light-hearted traditions intrinsic to military life. The first years, their respective staff, and the honoured guests enjoyed an evening of conviviality and shenanigans which will surely remain in their collective memories for years to come.

For me, the mess dinner signifies an enormous step in the First Year Class’s long journey to becoming officers in the CAF. The traditions that were taught to me three years ago by my FYOP staff and those around during my mess dinner still hold a fond place in my memory. The pride that is exhibited towards ones unit through the marches, toasts, and unit mess traditions, as well as the respect and honour given to the select individuals who form the head table and the friends who have fallen in battle is the epitome of what I believe to be true military culture. I was privileged to be able to share these experiences with the class of 2019, and honoured that I could in turn pass on my knowledge to them as my FYOP staff did for me three years ago.

The First Year Training Mess Dinner is an excellent experience for any First Year Officer Cadet at RMC. Back in First Year, it was the first mess dinner that I had ever attended as a member of the CAF. It was a great opportunity to learn about mess culture in the CAF while having fun with new friends. I remember at my First Year Mess Dinner, that it was the first time that we had seen our staff relax. It was an opportunity for us as first years to interact socially with some of the third and fourth years in our Squadrons, and it made us feel like part of the family.

More photos by Denice Zoretich from the Mess Dinner – Albums 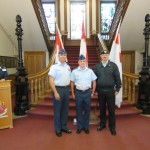 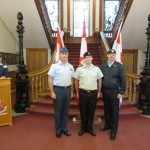 *** Photos by: OCdt McCaffery-Noviss (Click on photos for better viewing)

Four Cadets Move to the Ranks

The relinquishing ceremony is a formal event where the Commandant of RMCC officially bestows the rank of Private or Ordinary Seaman to a cadet. This is only done in cases where an Officer/Naval Cadet wishes to become an Non-commissioned member of the Canadian Forces.

There are two cases where an RMCC cadet would relinquish, known as the VOT and COT:

The Voluntary Occupational Transfer is the option for cadets who meet all of the requirements to continue in the ROTP but choose to pursue a career within the non commissioned trades.

The Compulsory Occupational Transfer is the option for cadets who do not meet the requirements to remain in the ROTP, but are found to possess the qualities required to continue serving in the CAF as a non commissioned member.

The proceedings are similar that of a promotion, when in reality it is a lateral transition from the beginnings of a career as an officer to the start of one as an NCM.

Due to the fact that few cadets relinquish at one time, this ceremony is performed indoors in Currie Hall or by the Memorial Staircase in the Mackenzie building. Though small in size, this ceremony is big part of the members career as it provides the opportunity to gain valuable experience in one of the many NCM trades.

A short bio on each of the four who were involved with the most Relinquishing Ceremony: