Taking the faceoff for North Bay Battalion, Marcus McIvor  is #4 and for the hometown Kingston Frontenacs, #20 – Roland McKeown. The game was played at the K-Rock Centre, 7 Nov and North Bay were the game winners by a score of 4-1. 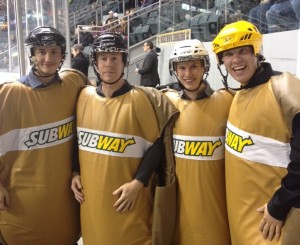 In the picture, from left to right is OCdt Bruni, NCdt Lapointe, OCdt Donnelly, and OCdt Landry – all from 8 Squadron.

This highly motivated foursome were selected as serving members to take part in the intermission games at centre ice. In teams of 2, they had to build a sandwich, using themselves as the buns. In short, they partook in a small race against each other, with Landry and Donnelly winning by a slim margin.

The game tickets were graciously donated to the cadets by John and Heather Price, 2 real estate gurus in the Kingston community.

8 SQN pride was well demonstrated during the entertaining event and reflected well on RMCC  as a whole.

Unlike the night before – the hometown team was the winner by a score of 2-1.

Friday 7 Nov, I had the distinct pleasure of attending the Vimy Award Gala dinner along with OCdt Poplawski and OCdt Sager under the direction of Capt Lord. The dinner took place at the Canadian National War Museum in the infamous tank room.

The Vimy Award was created in 1991 to “recognize a Canadian who has made outstanding contributions to the security and defence of Canada and to the contribution in the defence and security of our nation and preservation of our democratic values. It is so named for the bravery and sacrifices of the Canadian soldiers who won at the Battle of Vimy Ridge in 1917. This year’s recipient was Blake C. Goldring, MSM, LLD, CFA. He is the Chairman and CEO of AGF Management Limited and holds an Honours BA from U of T as well as an MBA from INSEAD in France. As honorary Colonel of the Canadian Army, Mr. Goldring is the Founder and Chairman of Canada Company, Many Ways to Serve, an organization to bring community leaders across Canada together to support members of the CAF and their families. Canada Company awards scholarships to children whose parents have made the ultimate sacrifice in their service to Canada among other initiatives. As an Honorary Colonel, he plays an important role in strengthening relations between Canada’s business community and the Canadian Army.

The Dinner was a beautiful affair. After a reception in the atrium, where I saw more generals and colonels in the same place than I ever had before, we were ushered into the main hall. Dinner was a lavish affair, with more courses than meals I usually eat in a day. I was lucky enough to be sitting at a table of Commissionaires, and beside a Navy pharmacist. I spent most of the meal talking to her about health care in the CAF, as it is a field I would like to pursue after my time at the College is done.

The most touching part of the evening was when the families and friends of Cpl Nathan Cirrillo and WO Patrice Vincent were introduced. Mr. Goldring dedicated his award to the lives of the men who suffered great tragedy while wearing our uniform proudly.

The Vimy Dinner is an experience I will not soon forget, and I feel blessed and lucky that I was offered the opportunity to attend such a prestigious event.

Ed Note: The Vimy Dinner is another of the many functions, off campus, that is supported by the Foundation. 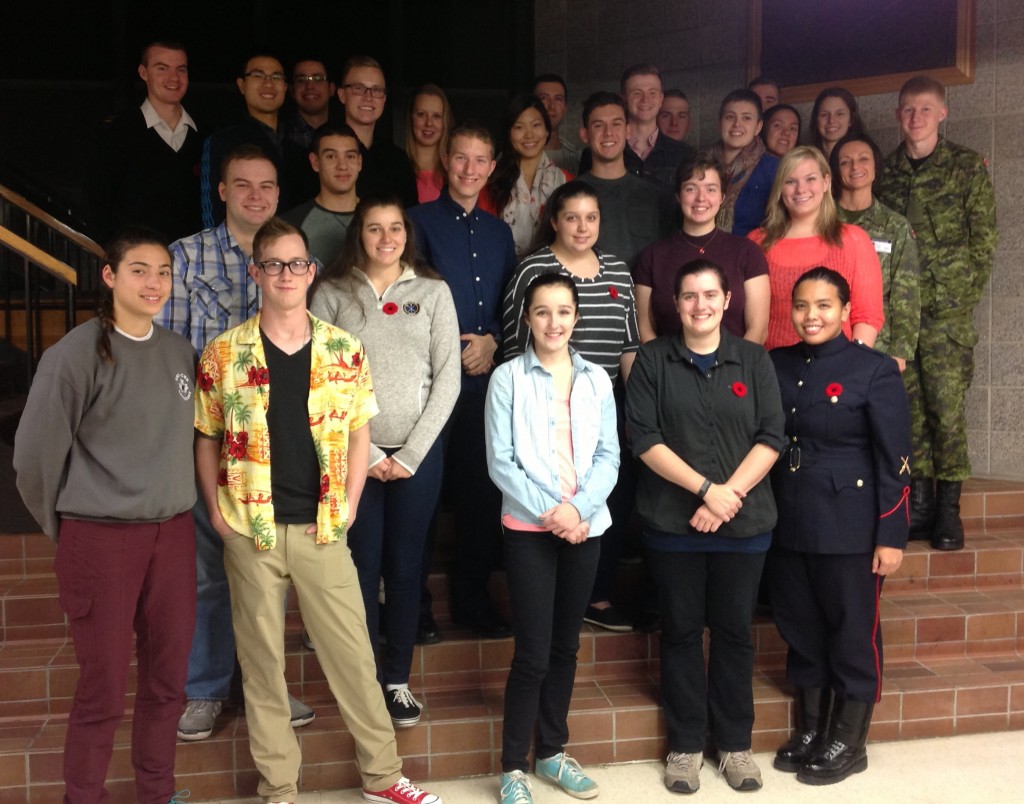 On Monday, November 3, the Peer Assistance Group (PAG) carried out its monthly training under the direction of Sharon Ash from Health Promotions and Rachel Dutcher. The focus of the evening was on self-care and compassion training. Some of the subjects that were addressed were compassion fatigue and vicarious trauma.

The members received instruction on the meaning of certain terms, some of the causes and symptoms, and some of the procedures that can be done to prevent and deal with those issues. Another portion of the evening involved the introduction of relaxation techniques, including some yoga and some listening to muscle relaxation exercises.

This training was extremely beneficial, but not simply for the people that attended. The information that was learned in the briefing is extremely beneficial to PAG as an organization that aids to help out the morale and care within the cadet wing. In the future, PAG members will now be better prepared to handle a larger variety of issues that their peers may come forward with. Self-care is an extremely important issue, especially for the cadet wing, the future leaders of the Canadian Armed Forces.

Before you can look after other people, you must first ensure your own stability and safety. This was the goal of the training, and was achieved successfully. 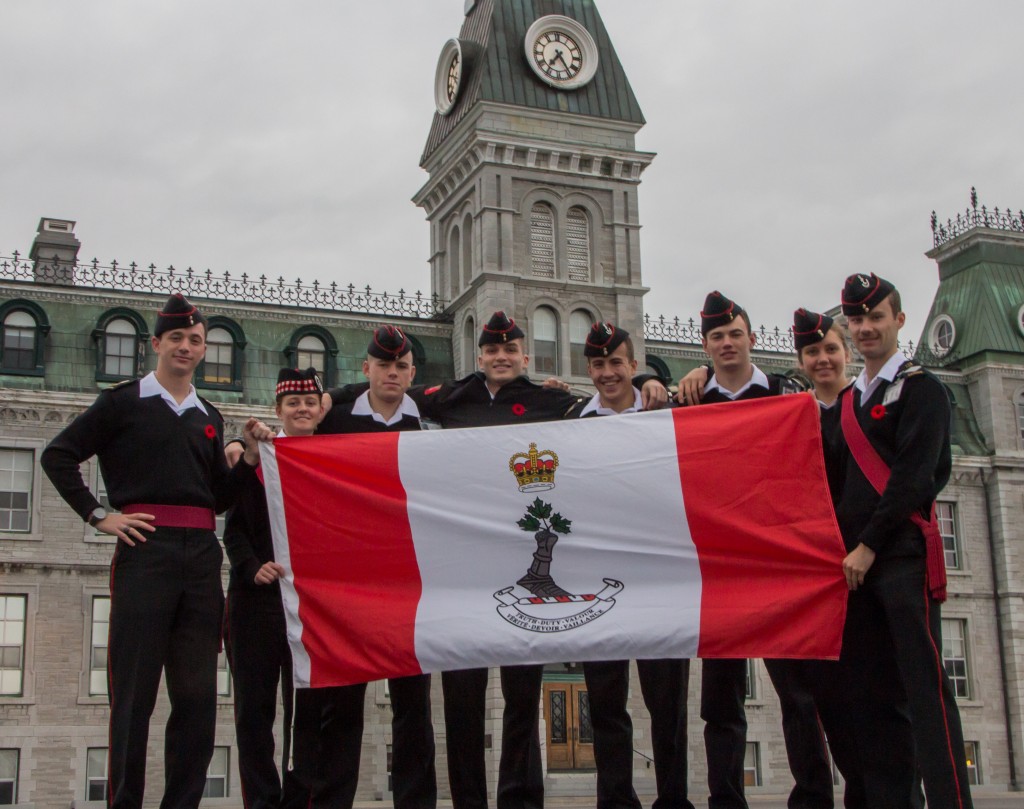 On December 13th, 8 OCdts. from the Royal Military College of Canada will venture to the high Andes of Peru to experience a true challenge. These cadets will be reaching altitudes of 16,000 ft and be exploring some of the most remote regions of South America. It will be an opportunity for the team to experience the Peruvian culture and the Spanish language. These OCdts. will be landing in Lima and then make their way to a remote high town of Huaraz, which is the adventure capital of the region. From there, the OCdts. will be acclimatizing to the high altitude with one or two intense day hikes followed by large amounts of rest. This will prepare them for the challenging endeavour that they will undertake in the following days.

In all, these OCdts. will be given an opportunity of a life time to experience a foreign culture, gain practical experience in leadership, and engage in social activities that will benefit them as future officers in the Canadian Armed Forces. The RMC Expedition Club would like to thank the RMC Foundation for its generous donation of $20,000 that is making this expedition possible and allowing the Club to send cadets to the ends of the world.