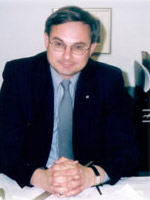 Minister of National Defence Announces Appointment of New Principal of Royal Military College of CanadaThe Honourable Peter Gordon MacKay, Minister of National Defence and Minister of the Atlantic Canada Opportunities Agency, announced today the appointment of Dr. Joel J. Sokolsky as Principal of Royal Military College of Canada (RMC) effective August 1, 2008. Minister MacKay made the announcement as Chancellor of RMC during Convocation Ceremonies where he presented graduating students and honourees with Bachelor’s, Master’s, and Doctoral degrees.

“Dr. Sokolsky is the right person for this important post and his appointment follows in the finest tradition of this great national institution”, said the minister, adding that “as Chancellor it gives me great pleasure to see another fine page added to the history of RMC”.

Dr. Sokolsky has a long association with RMC, starting as a faculty member in 1986. For the past several years he has been Dean of the Faculty of Arts. He was instrumental in the positive changes that have come about at RMC. He is an outstanding scholar in his field, which directly pertains to the business of RMC: Canadian, Foreign, and Defence Policy. His distinguished academic record includes degrees from the University of Toronto, Johns Hopkins University, and Harvard University. He is well published in his field, respected as a researcher, knows the College intimately, and cares passionately about it.

RMC opened its doors to the first class of eighteen gentlemen cadets, the “Old Eighteen,” on June 1, 1876 as the Military College of Canada, and in 1878 Her Majesty Queen Victoria granted the College the right to use the Royal prefix. “The Royal Military College of Canada Degrees Act, 1959,” empowers RMC to confer degrees in Arts, Science, and Engineering. Today, RMC offers a wide variety of programmes at the undergraduate and graduate levels, both on-site and by distance learning through the Division of Continuing Studies. RMC graduates have established a sterling reputation of service and achievement throughout the world. and have distinguished themselves in all aspects of Canadian military service. Ex-cadets have been similarly prominent in a wide variety of civilian professions.

‘A career with an adventure’; Vice-chief of the defence staff salutes RMC graduates
Ian Elliot -Kingston Whig Standard – 16 May 2008

When Charlotte Sully marched through the Memorial Arch at Royal Military College yesterday with the rest of the 2008 graduating class, she was landing a leap of faith that she started four years earlier.
The 22-year-old from Calgary seemed an unlikely military prospect in high school: a ballerina who admittedly arrived at the school shy and reluctant to raise her voice.
She emerged yesterday with an officer’s commission and a long list of academic and military achievements earned during her time at the college as she prepared to start a career in army intelligence.
“I traded pointe shoes for combat boots,” she said after accompanying her classmates through the arch, their pillbox hats on the points of their ceremonial swords while two vintage Second World War fighters buzzed overhead.
“I always thought I’d make it this far, but I have to say that seeing the arch coming up in front of us as we marched brought tears to my eyes.”

Lt.-Gen. Walter Natynczyk, vice-chief of the defence staff – and the officer many think will be chosen to replace the outgoing chief of defence staff Gen. Rick Hillier in July – oversaw yesterday’s commissioning parade. He said in an interview that the Canadian Forces is increasingly attracting bright, young people like Sully who might not have considered a military career even a decade ago.

Continuation of this article and 27 Ex Cadets Earn PG.

“I’ve talked to a lot of people in our recruiting offices right across the country, and they all say people are coming in the front doors because they want a career with an adventure,” he said as cadets in scarlet milled around after the ceremony having their photos taken with their families and classmates.
With the military operating not just in Afghanistan but around the world, cadets see a chance to make a difference and have a career more challenging than one in an office.
“What’s so thrilling about a day like this is that these cadets want to do this,” Natynczyk said.
Natynczyk made the same point in his speech to cadets, saying the Armed Forces are undergoing a renaissance in purpose and in terms of public recognition of what they do.
“The sun is shining on you today,” Natynczyk told the graduating class.

“Congratulations. Gen. Hillier has asked me to express how much he envies you entering the Canadian Forces at this particular time.”
Natynczyk did not graduate from RMC. He studied at Royal Roads and College Militaire Royal at St-Jean, Que., and graduated in 1979. He has served several postings in Kingston, most recently as head of the army’s Land Doctrine centre, and also was seconded to the American army in Iraq where he commanded a force several times the size of the entire Canadian army.
Yesterday’s commissioning parade was notable in that families were allowed on the once-sacrosanct parade square near the end of the parade to take pictures of their sons and daughters standing at attention and holding their scrolls, part of the military’s ongoing attempts to involve families in military life and traditions, something of which Natynczyk is a vocal proponent.
The ceremony included an inspection and a march past by cadets, who ranged from the red-coated young cadets to the Otter Squadron, mid-career NCOs identified as officer material by their superiors. They were noteworthy not just for their age and the rows of medals on their dress uniforms, but for the fact their drill was absolutely flawless. Some may have been marching on parade squares when today’s cadets were still learning how to toddle.
The ceremony also included the traditional flypast, including a Spitfire and a Mustang flown by RMC grads Michael Potter and Rob Endos, now successful Ottawa entrepreneurs and vintage plane buffs.
Three students from Kingston were among the 223 who graduated yesterday: Brent James Limbeek (Navy), Katherine Michael Barry (Army) and Morgan Anthony Wyant Oliviero (Army).
Students who graduated yesterday will report to their units as early as Tuesday, and the college now holds its graduation parade mid-week rather than over the long May weekend to give them a few extra days to move out of the college and get to their new postings.

Read more on each PG recipient:

Programme: Master of Science in Physics

Programme: Master of Science in Physics

Programme: Master of Applied Science in Chemical and Materials Engineering

Programme: Master of Applied Science in Chemical and Materials Engineering

Photos were used where available.