There is no debating, RMC came out on top during West Point Weekend.

As a matter of fact, the RMC Debate Team, represented by IV OCdt Mark Niles and IV OCdt Jon Douglas put on a fantastic display of eloquence and wit, winning the Annual Debate competition, which brings RMC to just one victory away from West Point in the total wins, since West Point still leads by 27 wins against RMC’s 26.

RMC had to prove the following resolution wrong: “Nuclear weapons have no military utility”. The rules of this annual debate have the host send three resolutions to the visiting team who selects the one used for the actual debate. OCdt Niles states, “The resolution they chose was the one we preferred.” After the coin toss decided RMC was representing the negative side, he says, “We felt more comfortable with the affirmative side so after the coin toss, we really worked to consolidate our negative position.”

BGen Tom Lawson was on hand to award the USMA/RMC historic traveling trophy to the winners. He also gave the four participants RMC Commandant’s coins, which according to the Commandant, inspired by the debate, “are decorative and have no military utility.”

Taekwondo is another area where the RMC Team took the spotlight, winning 4 of 7 matches in a race to the finish. OCdt Jonathan Bussey, OCdt Danielle Scott and OCdt Jeff Gravel won their matches, and the overall score was tied 3 matches to 3 when OCdt Francis Montagnese finished the tournament with a bang, putting on an impressive display of skill to defeat his opponent by a score of 8-1. Coach Joel Ridley had to be very proud of his team’s efforts. The Taekwondo team still has two events remaining in their season at Queen’s and Trent universities.

Light snow and mild weather were appreciated by the participants and spectators of the winter sports day that involved RMC squadrons with USMA cadets mixed in. The weather also facilitated the unofficial event of the tabloid sports competition, snowball fights. Even the Commandants of RMC and USMA were forced to join the fun by throwing some snowballs themselves. The winter tabloid competition stressed teamwork and friendly competition between Squadrons. The competition, including the Chain of Command race, the marquee segment, saw 1 Squadron obtain the bragging rights.

The snow soccer tournament’s final had Lt(N) Tony Lefresne, Squadron Commander for both 3 and 4 Squadrons, in a win-win situation but torn in his loyalties. In the end, 3 Squadron won the contest but 4 Sqn was not done yet.

The ball hockey tournament’s final featured 4 and 7 Squadrons. In a game controlled for the most part by 4 Squadron, both goalies were standouts, but 4 Squadron’s performance gave them the win by a score of 2-0. Team Captain OCdt Stephen Keeble states, “This was our best game of the day, it all came together for us.”

In snow touch football, 8 Sqn won, avoiding a complete sweep by A Division Squadrons for the sports day.

A Division Commander, Major Claude Lavallée was very proud of his division’s performance today, winning the winter tabloids, and the snow soccer and ball hockey trophies. The overall winner for the entire sports day was 4 Sqn, thanks to a 1-2 performance in ball hockey and soccer. “Today is a good day for A Div,” said Major Lavallée.

West Point Weekend at RMC hosted 77 cadets, with 9 staff and 3 spouses and helped foster the friendship that ties the institutions. It also proved, with the debate and taekwondo competitions, that RMC is up for a challenge. 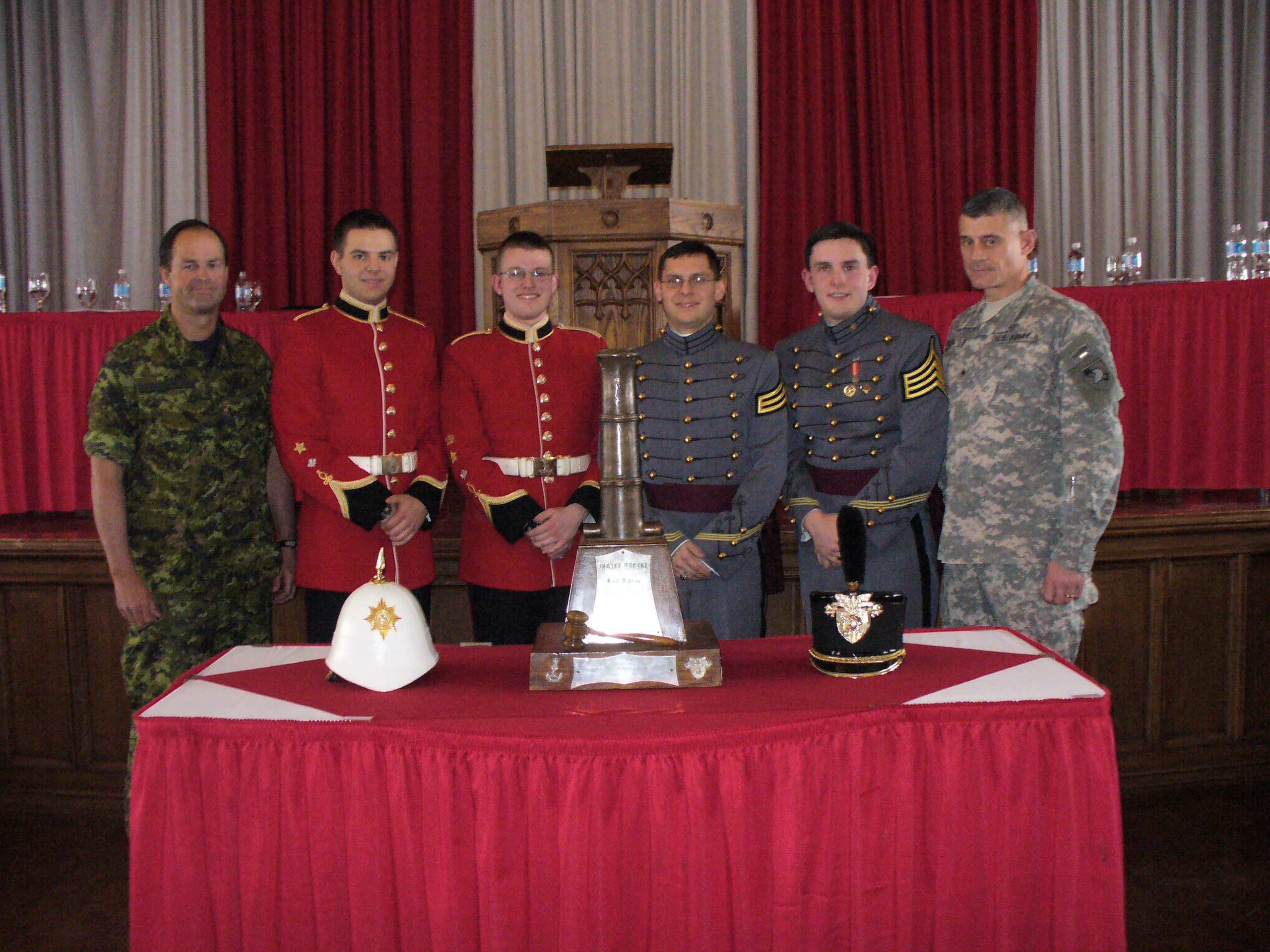 Close to 80 cadets from West Point spent the past weekend at RMC.

Tkd, Debating and a series of winter outdoor games highlighted the successful weekend which all took place on Saturday. The visitors arrived Thursday night and spent most of Friday in various classrooms with their RMC counter parts; a night on the town – Friday night; and a formal dinner Saturday evening were the main social & cultural events. West Point cadets also shared sleeping quarters with RMC cadets.

We had the opportunity to have a glimpse at some of the outdoor activities which reminded us of a fun Winter Carnival. We also took in the spirited Debate – won by RMC. The opportunity to chat one-on-one with a number of RMC and USMA cadets during the day on Saturday was interesting. Without exception their spirits were high and they were obviously having fun. However, reaction was mixed when asked to compare this edition of WP Weekend compared to past versions.
If the goal was to foster friendly relations between cadets from both institutions – Mission Accomplished!