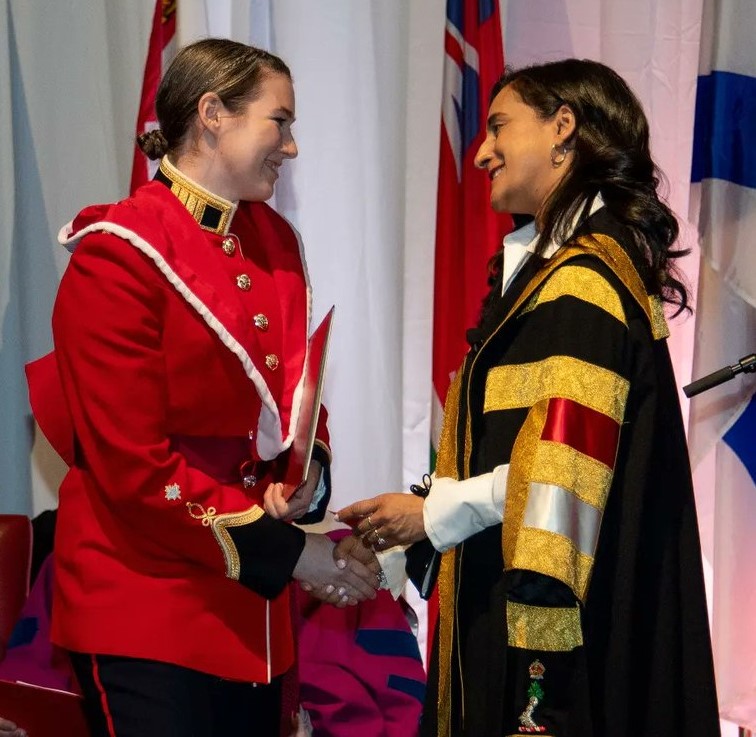 During a recent AGM of the RMC Alumni Association, a question arose from a member about the use of the post-nominal letters rmc. The ensuing discussion suggested this topic was potentially of interest to the greater membership and one perhaps unfamiliar to some of us. That’s where I came into play. I assist the RMC Wall of Honour committee as a citation-writer and that role has led me to research the Government of Canada and Canadian Armed Forces policies applicable to military writing.

So, you think you’re entitled to some post-nominals that announce your status as a graduate of a Canadian Military College (CMC)? Well, how do you know that for sure, and when is it appropriate to include them in your correspondence?

Let’s start with the Canadian Forces Honours Policy Manual (A-DH-300-000/AG-001) which says that post-nominals should be used in formal documents, official correspondence, biographies and on business cards. They may be used in the letterhead, the address block, and the signature block. Another primary reference is Termium Plus, the Government of Canada’s official terminology and linguistic data bank.

If you have a bachelor’s degree from a CMC, may you use the rmc, rrmc or cmr post-nominals? Well, maybe, but not necessarily. The authority for any individual to use post-nominals related to a professional or military qualification derives from the institution, organization, association, or school delivering the training. In our case, each of the military colleges is, or was, responsible to confer status upon their graduates, and the authoritative body in that regard is the Senate of the College. In Kingston, the Senate was created after the enactment of the Royal Military College of Canada Degrees Act 1959 by the Province of Ontario. Senate’s primary function is to grant degrees and honorary degrees. In addition, the Senate is the final authority on all academic matters.

It had been the practice for many decades in Britain to add post-nominals, such as psc (Passed Staff College) to the names of officers in various service lists to denote their attendance and qualifications from schools such as the Staff College, Camberley or the Royal Naval College, Greenwich or RAF Staff College, Bracknell. This custom was adopted throughout the armies of the Commonwealth and by the mid-to-late-twentieth century, graduates of various Canadian military schools were using – among many other similar qualifications – post-nominals such as ndc (National Defence College), plsc (Passed Land Staff Course) or pcsc (Passed Command and Staff Course). Mirroring the British Army custom, Force Mobile Command (as Canada’s land forces were known following integration of the Canadian Armed Forces) in the 1970s published in their Army Gradation List the names of officers along with their post-nominal letters.

Anecdotally, a reliable source tells me that it was in the mid-70s that General Jacques Alfred Dextraze, Chief of the Defence Staff, on recommendation, began a push to start using post-nominals to recognize graduates of the CMC. Thus, for perhaps fifty years now, it became common practice for ROTP or RETP graduates to use the post-nominals rmc, rrmc (Royal Roads Military College) or cmr (Collège militaire royal de Saint–Jean).

So where is this written that I’m eligible? Well, looking at my own degree script, printed in 1982, there is no mention of any post-nominals. Like I said, it was already a common practice. However, when I look at my daughter’s degree script from 2017, the post-nominals cmr are indicated, and she graduated in Kingston, not Saint-Jean. In recent years, to ensure that the quality of RMC degrees being granted meets the highest standards, the Senate, has deemed that only students in ROTP or RETP who successfully complete the four interlocking pillars (note 1) merit the rmc post nominal letters. This policy is published on the RMC website. On their French language website pages, it’s written that the Senate authorizes the use of translated post-nominal letters, namely cmr. Graduates now have their post-nominals printed beside their name on their degree script.

So, now you know that you’ve merited the post-nominals. When is it appropriate to use them? Once again, the Canadian Forces Honours Policy Manual offers guidance. First, we must realize there are two different kinds of post-nominals: honours that derive from the Crown, and other qualifications or distinctions.

Honours from the Crown include the highest honours (Victoria Cross and Cross of Valour), National orders (e.g. Order of Canada, Order of Military Merit), Provincial orders (e.g. Order of Ontario), Decorations (e.g. Star of Courage, Meritorious Service Medal), Medals (e.g. Special Service Medal, UN Force in Cyprus, Canadian Forces Decoration). These are just a few examples chosen from a great many similar honours.  Canadian Forces Honours Policy Manual states that common practice in the Canadian Forces is to include only post-nominals related to honours from the Crown and royal appointments (note 2).

Related to this notion that context matters are that some members of the academic faculty at the military colleges may sometimes employ the upper-case version RMC, in parenthesis, to indicate from which university they received their degree. This is a common practice among academia at universities across Canada and Britain. It would look like this: BA (RMC), MBA (UWO).

The bottom line is that if the post-nominals are directly applicable to the subject of the correspondence, will be understood by the recipient(s) or audience and are necessary to emphasize and highlight your status and qualifications, then by all means include them. If not, then don’t.

CCFP – Certificant of the College of Family Physicians of Canada

FEIC – Fellow of the Engineering Institute of Canada

MCIC – Member of the Chemical Institute of Canada

Some honours received by Canadians are not recognized here. In some cases, the medal and ribbon may be worn but it does not carry any right to use post-nominal letters. In 2017, the Director of History and Heritage emphasized this policy via CANFORGEN that:

Therefore, even if permission has been granted to wear the medal, you cannot use the post-nominal letters such as: Ld’H (French Légion d’honneur), MSM, RMWO (or MWO) (Knight of the Military Order of William, awarded by the Netherlands) or OStJ (Officer of the Most Venerable Order of the Hospital of St. John of Jerusalem, or , if applicable, the other grades of Member, Commander, Knight, Dame, Bailiff or Dame Grand Cross).

I hope I’ve sparked your interest in the subject of post-nominal letters and encouraged you to include yours at any appropriate opportunity.