E-Veritas: How did you come to study at RMC?

Dr. Doug Hamilton: An Air Force ROTP recruiter came to my Vancouver High School encouraged us to join the Air Force. Since I found during the vision test that I was colour blind and I knew my eyesight was relatively poor (although the Air Force never checked it), I was ineligible to join the Air Force. However I could join the Army. I later found that while my vision was not good enough to get into the army, it was not bad enough to be released once you were in. At the time the service Colleges were being emphasized. When the Army Selection Officer asked me if I preferred to attend RMC in Kingston or Royal Roads in Victoria, I explained that I hadn’t thought of it (mostly because I had not really heard of RMC and with poor eyesight thought it would not be possible). He flipped a coin, heads RMC and tails Royal Roads – heads it was. I was the only Cadet in my recruit class at RMC from BC since most went to Royal Roads. My friend and classmate 7001 Harry Hamilton and I often suspected that the army may have mixed up our recruiting files since he came from Elgin (about 20km North of RMC) and went to Royal Roads; and I came from Vancouver and went to RMC.

E-Veritas: What did you study at RMC? Any highlights?

Dr. Doug Hamilton: I studied Mechanical Engineering at RMC, graduating with a BEng in 1966. I met my wife Valerie, who was studying language arts at Queens. Although I couldn’t stay out late (2359 or 0100) and only had a limited number of leaves per month, Valerie and I had a fine time at RMC balls, movies, and suppers. We married in 1967 (Centennial Project) and have two sons, Bruce and David. David and his wife Alisha have presented us with two grand-children, Ben and Charlotte, who are really a joy.

I also attended the United States Naval Postgraduate School (NPGS) in Monterey, CA earning a Bachelor Science in Weapons Technology (BS) and a Master of Science in Mechanical Engineering (MSME) in 1977. My research topic was “Ballistic Penetration Characteristics of an Ultra-high Carbon Steel Armor” with Dr. Terry McNeeley at NPGS and Dr. Oleg Sherby from Stanford. For my research, I shot Fragment Simulating Projectiles (FSP) into small plates of armour made of Dr.Sherby’s high carbon steel that had been subjected to varied heat treatments. We showed ballistic resistance could be improved.

I worked on exchange at the Large Calibre Weapon Systems Lab at Pickatinny Arsenal in Dover NJ, first on a study of “Future Vehicle Armament Technology”. (This study became classified so until we got a waiver I was not to read what I had written!) Later I worked on testing 105mm and 120mm APFSDS rounds, Self-Forging Projectile (SFP) (now Explosively Formed Projectile (EFP)) Warheads, and 81mm Red Phosphorous Smoke. The testing of the projectiles was very interesting. The warheads were fired toward thick plates of armour and the characteristics such as velocity, stability, and depth of penetration were measured. We remained protected an underground bunker while this was done. My task during analysis was to use existing finite element programmes and penetration models to match the actual performance with the empirical models. Changes were made in the geometry of the models to predict how performance could be improved. New warheads were built and the tests were run again. The group also considered armour protection such as spaced or composite armour as defence against these warheads.

E-veritas: You taught at RMC and other universities. What were your teaching interests?

Dr. Doug Hamilton: I was on staff at RMC one term in 1967, 1982-1998, and 1999-2010. I taught a variety of courses, including Thermodynamics and Mechanics. My primary teaching was Materials and Engineering Graphics. I also taught Military Vehicles and Weapons at the Department of Applied Military Science (AMS). The subject I enjoyed teaching the most was Engineering Graphics which I taught at RMC, Purdue, and Queen’s. I taught at Purdue in West Lafayette, Indiana in 1998-99, and at Queen’s from 1999-2010.

E-veritas: Where did you serve? Any highlights?

Dr. Doug Hamilton: I served in the Army from 1962 to 1994 as a Royal Canadian Electrical and Mechanical Engineers (RCEME) officer in Calgary, Kingston, St. Hubert, South Viet Nam, Ottawa, Monterey CA, and Dover NJ. I retired as a Major. 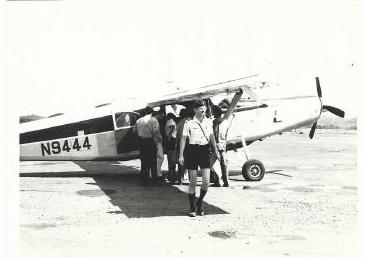 The highlight of my military career was serving as a peace observer in South Viet Nam with ICCS from February to July 1973. The Agreement on Ending the War and Restoring Peace in Vietnam was signed on 27 January 1973. These Paris Peace Accords of 1973 temporarily stopped the fighting between the Republic of Viet Nam (South Viet Nam), and the Provisional Revolutionary Government (Viet Cong) who were supported by the Democratic Republic of Vietnam (North Vietnam). After arriving in Viet Nam, I was deployed to a teamsite in Da Lat, now a popular tourist destination in the cool mountains of the in the southern part of the Central Highlands. We were the first teamsite actually deployed. Later I served at Phan Rang, a quiet provincial capital (where President Thieu was born) located by the sea on the narrow coastal plain of Viet Nam. It had a very nice beach and now has four or five Five-star Hotels to support the expanding tourist industry. Phan Rang is the former site of the US Air Force’s Phan Rang Air Base that was later taken over by the Vietnamese. The Vietnamese people in our area were greatly encouraged by the peace accords. They established a resettlement programme along a river near us. First men came to set up and begin production at a brick factory. Then more men came and began to build houses and farms. Soon their families came and planted rice. After a short period, these small villages, located in areas that had suffered 10 years or more of security problems and had not been farmed, looked like they had been there forever. Our Engineers often helped the local people by improving wells and water systems. I thought that serving here helped contribute to peace, reconciliation, and concord in Viet Nam.

I would like to say that in general the Vietnamese are very good people. They are industrious and hard-working, as evidenced by the “boat people” who came to Canada and also the industrial and economic progress made since the war. Our task was made easier and more rewarding since while the different sides had political differences with each other, they did not have the long established animosity and hate such as is now found in the former Yugoslavia. Reconciliation seemed possible.

E-veritas: What memories do you have of RMC?

Dr. Doug Hamilton: Many, mostly good. I actually enjoyed being a Cadet. I did a lot more varied activities at RMC than I ever would have done at Civvy U. Inter squadron sports were a much bigger deal in the 60’s. We played three afternoons a week, between classes and supper. I played soccer, floor hockey, water polo, lacrosse, swimming, rugby, and track (one of H25917 Maj Danny McLeod’s “no glory athletes”). I made many close long-time friends, as I am sure Cadets still do today. I have many vague memories of “pitting out” in the back row in L7 (or M7as it is now). Based on my teaching experience through the 80’s, 90’s, and 00’s the current Cadets do not do this to the same extent. They are much more conscientious students than we were 50 years ago.

E-Veritas: Were you academically inclined? Any tips or lessons learned?

Dr. Doug Hamilton: I was not as academically inclined as I could have been, and tended to procrastinate given any opportunity (“Why do today what you can put off until tomorrow, because you might not have to do it tomorrow either.”). I remember that for my 4th year Spring Term (4 weeks in May) Project where 2864 Dr Pierre Bussieres (RMC 1952) was our project advisor, we found out one day at 1600 that the project was due at 0800 the next day (before, not after the weekend – panic). My partner and I had not completed collecting our data and spent the entire night making our runs in the lab, finishing the report with several minutes to spare the next morning. It is interesting to me that of our class of 23, most of whom were not, at the time, particularly inclined toward academics (52% is overkill), well over half now have advanced degrees and about 1/3 have PhD’s. RMC taught us how to work when we wanted to.

E-veritas: What are you doing these days? Any highlights?

Dr. Doug Hamilton: I am chair of the Kingston Chapter of Professional Engineers Ontario. PEO governs over 80,000 licence and certificate holders and regulates professional engineering in Ontario through the Professional Engineers Act [http://www.peo.on.ca]. The Kingston Chapter has about 1,100 members but most do not take part in Chapter activities. Our Chapter puts a lot of effort into Student Outreach. March is National Engineering Month, (NEM) and in support of this, our Chapter ran a Popsicle Stick Bridge Competition on Saturday 07 Mar 2015, where we tested the bridges built by about 30 Grade 3-6 students. These bridges were built prior to the competition, made of only glue and Popsicle sticks, and tested to failure. They represented quite a variety of designs. The Best Bridge carried over 50kg. Another NEM event that we run is a Student papers competition where Six student teams from RMC and Queen’s present a 12 minute talk on work they have done (usually their 4th year project). These presentations have been of excellent quality. Engineering is in good hands if these students are representative.

I am membership Chair of the Kingston PROBUS club and also serve as Director without portfolio of “The Royal Military College of Canada, Department of Mechanical Engineering, Cordite Foundation” known as the Cordite Foundation [http://www.rmc.ca/aca/me-gm/cor/index-eng.php]. I also play a lot of duplicate Bridge. I don’t know how I ever had time to go to work before I retired.