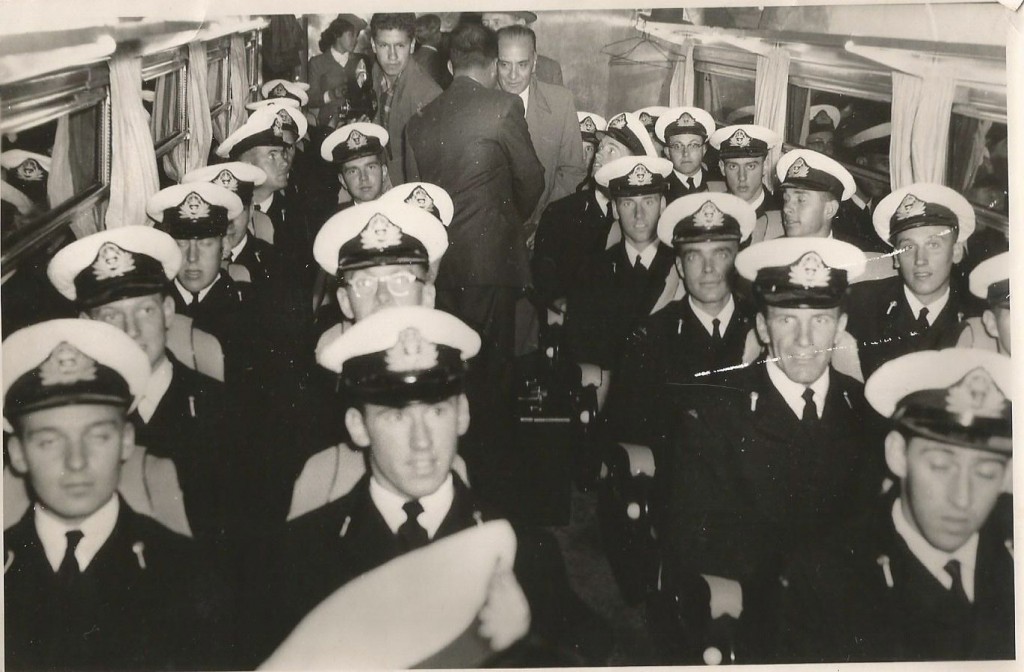 As a part of the Summer Cruise of HMCS ONTARIO in July 1956 we went down the West coast of North America as far south as the Equator, and then made a port call in Quaquille, Ecuador. As it transpired, the Ecuadorian Railway was doing a test run of a new self-propelled passenger car from Guaquille to Quito, and somehow, we Cadets were invited along for the ride.

The Cadets chosen were a mix of first year Cadets and third year Cadet(E)’s (the “E” standing for Engineering, as in steam and oil). All were from the Military Colleges, mainly RMC, except for me, a civilian university ROTP graduate from Acadia in Wolfville, NS en route to Halifax for my BEE from NS Technical College (later Technical University of Nova Scotia, and laterally the Engineering Faculty of Dalhousie University).

The picture was shot in the rail car as we proceeded towards Quito. I am on the Aisle seat, five rows back, on the left-hand side of the picture. Unfortunately I can’t remember who all was on that trip, so perhaps you might publish the picture and ask, “Was that you back then?”

Anyone who was on that trip will remember it well. The pretty young lady at the rear of the car was a University student hired on as a Stewardess for the summer. She spoke no English and we no Spanish. No matter: we tried our best anyway,to no avail, but she liked the attention anyway. We climbed from coastal plains, up through heavy tropical forests and banana plantations, up to Andean high plains via switch-back steep approaches up the canyon walls, and finally at nearly 12,000 feet, descended down into Quito. We found a seemingly modern European city on he surface, but riven by tremendous class differences between the originals and the European settlers who formed the privileged classes. Barrel-chested workers, many showing their bloodlines running back to Pizarro, amazed us with their ability to move heavy loads up steep streets while we gasped like fish out of water. Altitude adaption helps they said but that wasn’t likely to help us over a three day stay.

There had just been a Federal Election, but many were unhappy with the outcome. So on the second day of our visit,the military staged a coup and put a more agreeable party into power. There was no bloodshed as Federal troops seemed to feel that they had made an honourable stand by firing two shots into the air over the heads of the attacking troops.

On the way back to the coast, we were confronted by a forest fire in the banana plantations, and our rail car had to back up some miles to a small town. There, the local Cantina was opened and we improved our Spanish by learning how to order “another” beer “please” and “thank you” etc to round out our simple requests for “Dos cervesas, por favor, senor”. Highly educational!

“Join the Navy and see the world” was certainly true in those “good ol’ days”. It probably still is! I sure hope so.