After being tipped off by a wing-wide email, OCdt Ben Apedaile 25276, OCdt Alex Kisielius 25194, OCdt Sean Powell 25358, and OCdt Colin O’Rourke 25353 decided to attempt this year’s OEC. We began with little time and our first challenge was to get accepted – both by RMC to go and by OEC to participate. We did a lot of running around from office to office, squadron commanders to the dean’s secretary, sending emails and printing and reprinting memos and ‘Absence from Class’ forms over the few weeks before the competition on January 30th. We missed each of the two official registration deadlines, but contacted a competition administrator who gave us another deadline. We missed that one by an hour or two, but still managed to get registered.

Getting There and Getting Known

We left RMC for the University of Waterloo on Friday January 29th at 1330 and, after heavy traffic through Toronto, arrived at U Waterloo at around 1930, found the hotel and rushed to the welcome dinner in the Grand Ballroom. We missed the dinner service, but a volunteer said he would see if he could help and disappeared into the kitchen. At 2000, the briefing for the Junior Design contest began while we sat empty handed and hungry. A few minutes later, four waitresses emerged from the kitchen, each with a silver platter. We ate an amazing dinner as the brief continued. We were already the envy of the competition.

Later that night was the wine and cheese meet and greet and a 50/50raffle where the proceeds went to help Haiti. We were pretty popular and other competitors seemed to crowd around us in our combats. We felt and looked quite professional. We also met a lot of competitors and a few judges. We discovered that a lot of these competitors had already won preliminary competitions at their universities beating many other teams. These teams had experience and knew what to expect the following day.

Mental Prep and the Assignment

Dreams and jokes about winning the competition filled our heads that night. We woke at 0530 on Sat morning and tried to have breakfast before anyone else. We arrived at the university around 0800 and waited in a classroom for the final brief and our problem statement. Excitement filled the room as we received booklets outlining our task for the day. Our mission was to design an amphibious vehicle to carry logs across a lake and that would also have to ascend and descend the shores.

Building, Testing and Presenting the Vehicle

We entered our assigned building area at 0845 with the tools to construct our vehicle. Our planning stage began as each member of the team put forth ideas. We combined all the ideas to finalize our prototype design that was closest to OCdt Powell’s idea. We designated him IC with the power to make the executive decision on any part of the prototype to reduce arguments. We then took the list of materials available through ‘the store’ and gradually bought the necessary materials while slightly adjusting the prototype. With $6000 available, we came under budget at $5780 — quite a feat considering the nature of the store where a 6’ X 6’ piece of pink styrofoam was $600.

The design/build stage went very smoothly in terms of team dynamics, but was quite hectic, especially near the end, as we had to accomplish a lot in little time. An important discovery was made in the last few minutes: one of our motors was spinning the wrong way. Luckily, this was easily fixed at the hands of OCdt Kisielius while OCdt O’Rourke frantically and artistically put together the poster for our presentation.

We finished our prototype with seconds to spare; just enough to install our RMC flag. We did not have time to use our allotted 10 minutes to test our prototype through the course. Next, we had the presentation to the judges.

We used the SMESC format from summer training. The judges saw our machine work for the first time along with us. When it actually moved and the steering mechanisms worked and it didn’t sink we could all breathe again. We were hailed by fellow competitors as the most professional group during the presentations. Although unsuccessful at completing the goal, our vehicle demonstrated excellent maneuverability and real-life scalability. The Judges were also treated to a running commentary by OCdt Apedaile when things went wrong.

After all the presentations, we went back to the hotel feeling quite optimistic and hoping we might be in the top three. After a formal banquet with more great food the announcements began. There was big money riding on the competition: $500for third, $1,000 for second and $1,500 for first place. Third place was announced and it wasn’t us. Then, in the room of dark suits we heard through the speakers, “And in second place, the gentlemen in red, The Royal Military College!” We looked at each other with wide eyes, double-checking that we were in fact the only ones in bright red. The entire journey from paperwork to never-ending Toronto traffic to the presentation rushed through our minds in a second before going up on stage to receive our trophy and medals. We had amazingly placed second out of 16 teams from across Ontario.

The rest of the night was very joyous and included bowling with the rest of the competitors. We had won$1,000. The two top teams also qualify for the Canadian Engineering Competition (CEC) March 18-21 at the University of Toronto. We plan to start our planning a bit sooner this time. In fact it started the following morning on the drive back to the College. 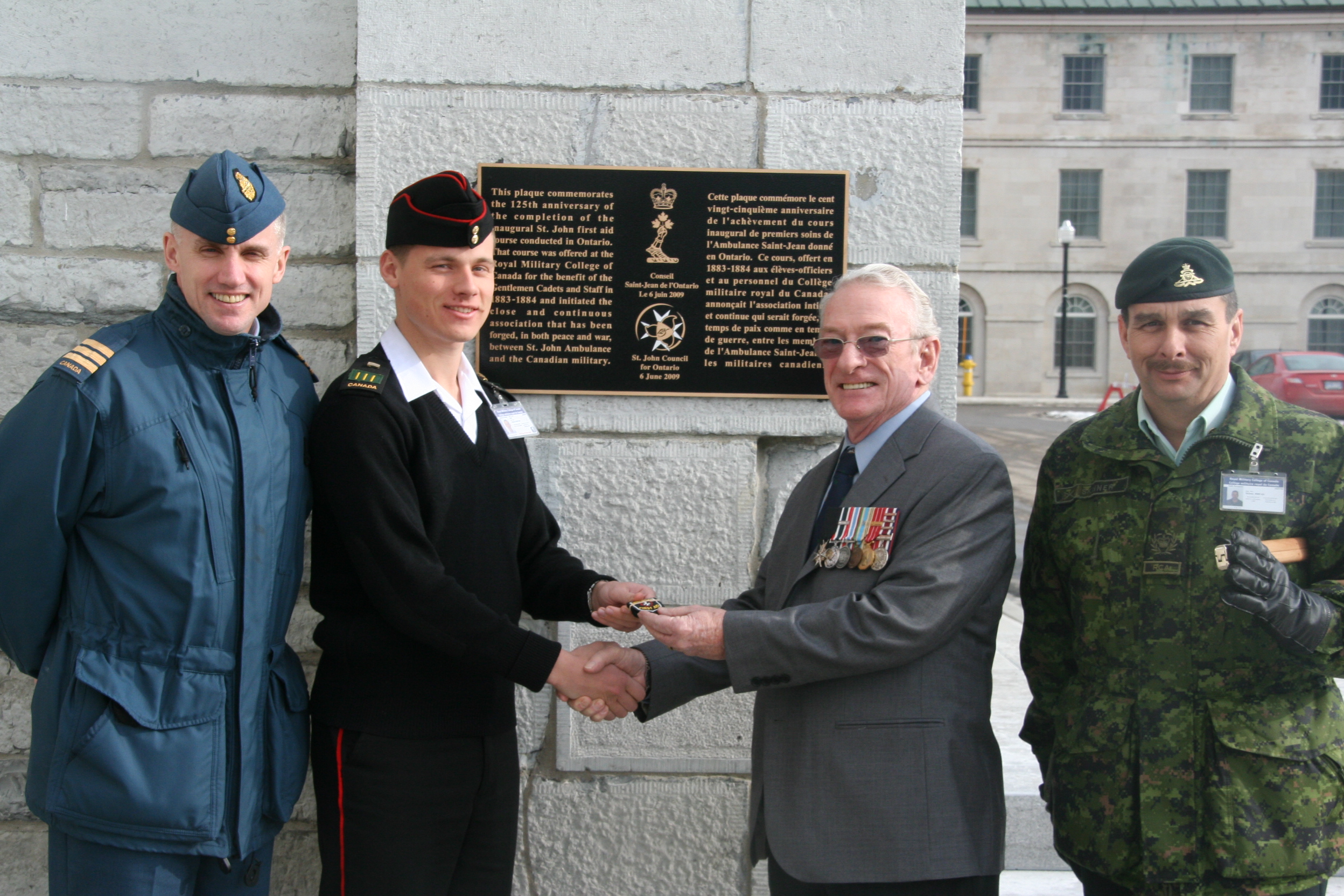 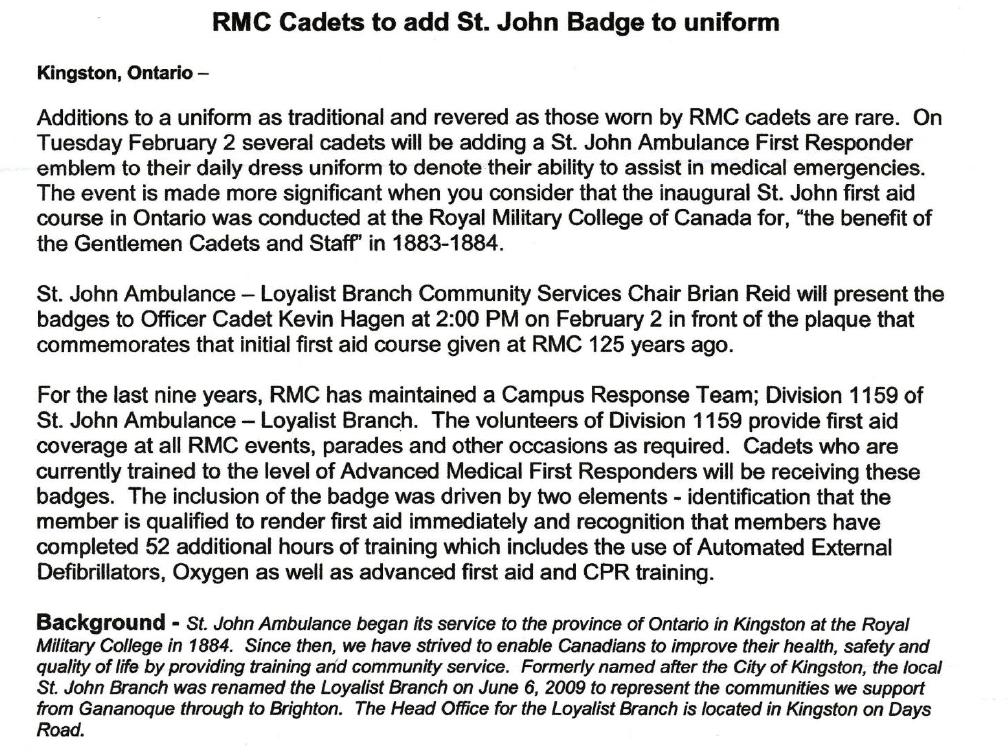 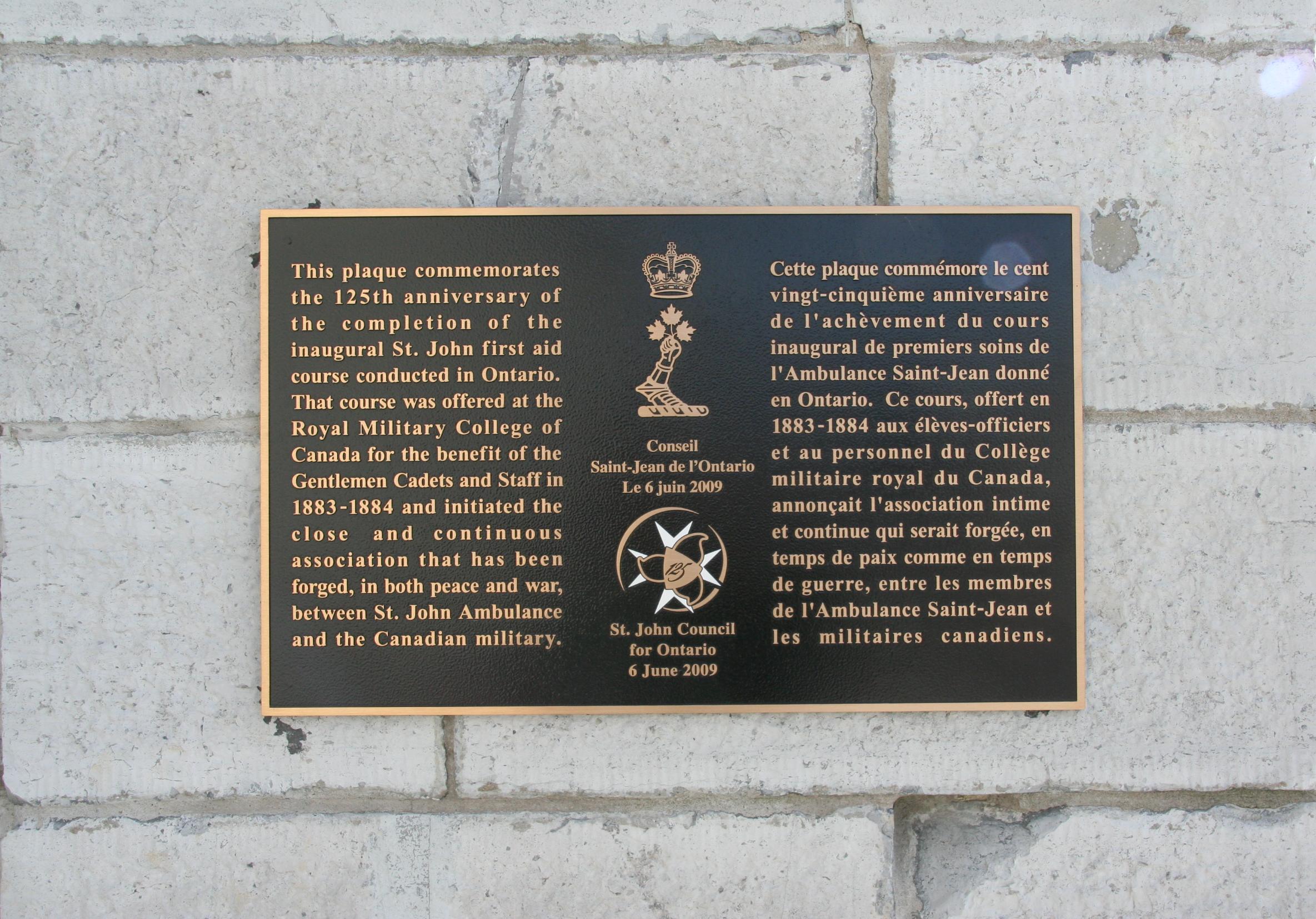 The RMC First Response Team (FRT) has existed at RMC for many years.  The FRT plays a major role in cadet activities around the college; the team provides qualified individuals to every event where potential injuries and overall safety are of concern.  Training the members of the RMF FRT is typically an annual event.  All members of the FRT hold the Standard First Aid qualification given to them during basic training, but every year, a handful of cadets are selected to attend an Advanced Medical First Responder (AMFR) course where old skills are revised and new skills attained.  This year, six second year and two first year cadets were loaded on to the AMFR course.

This semesters First Response Team captain is third year Kevin Hagen, and on behalf of the teams AMFR qualified individuals, he accepted the Saint John’s Ambulance AMFR qualification badges from Mr. Brian Reed, a member of the SJA community.