I was born in 1930 and attended Port Colborne High School;

I achieved the rank of Flight Sergeant in Air Cadets;

I received both a flying scholarship in 1948 and an Air Cadet League scholarship to Royal Roads in 1949;

At RMC, I was an active member of the rifle & pistol club, achieving the D.C.R.A.’s highest award: distinguished marksman;

As a cadet I dabbled in oil stock;

My wife the former Mary Elizabeth Forwasier and I celebrated our 55th wedding anniversary 17 July 2009;

Early in my RCAF career I was a pilot on: Dakotas; Harvards and Expeditors;

I had an exchange posting in 1969 to USAF Logistics Command HQ at Wright-Patterson AFB, Ohio. They saw fit to award me their Air Force Commendation Medal for my contribution;

I finally retired from my fourth career during the big downsizing in 1996;

I have been a long-time supporter of the RMC Club Foundation Legacy Dinner by sponsoring a few cadets to join me at our table every year;

I have supported the RMC Band on occasion and even purchased them a special set of bag pipes; 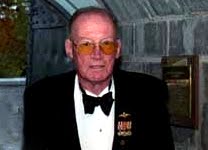