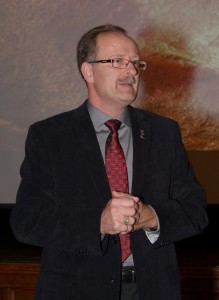 On a beautiful November evening, hordes of RMCC students, faculty, staff and friends filled Currie Hall for the twenty-fifth edition of the Class of 1965 Teaching Excellence Award. The Award was established in 1990 on the occasion of the twenty-fifth reunion of the Class “to recognize excellence in teaching and to promote that standard throughout the College.” The winner of the 2015-2016 award was Maj Andy Belyea PhD of the department of English.

establishing the award. Dr. Jim Carruthers, the RMC Foundation President, followed with a brief talk on the wide-ranging initiatives supported by the Foundation including the recent Centre for Innovation in Teaching and Learning initiative. Class of 1965 representative Brigadier-General (Retired) Charles Émond explained that the award was established to “honour the important and formative role that RMC professors played in their lives and careers and to recognize the continued contribution of inspiring teachers” like Maj Belyea. Dr. Huw Osborne, Head of the English Department, rounded off the opening statements with an introduction of Maj Belyea. He noted Maj Belyea’s unique career as a scholar, teacher and officer.

Maj Belyea started by describing the students of today and how they differ from those of past generations. He went on to use references from pop culture as a metaphor for some of the real problems facing humanity in general and this younger generation in particular. He described the use of literature as a tool to “war-game” these future scenarios.

The talk was followed-up by an interesting question-and-answer period that illustrated the high level of audience interest in this topical subject. In spite of the excellent presentation and in depth questions, Dr. Bates is, unfortunately, no closer to understanding *spoiler alert* whether or not Glenn is really dead in the aforementioned acclaimed AMC television drama.

After his lecture, Maj Belyea was thanked by Dr. Laura Robinson, Dean of Arts. He was then presented with a framed copy of his lecture poster and the Class of 1965 Teaching Excellence Award honorarium by Dr. Stephen Arnold. The audience then gathered in Baronial Hall for a reception.

The evening was another great success for the Class of 1965 Teaching Excellence Award and a welcome reminder of the important work of RMC teachers and alumni. The Vice-Principal Academic would like to thank the Class of 1965 and the Foundation for their continued support of the College. Special mention also goes to Jennifer Carpenter for her amazing work organizing this event.

Following the presentation, a picture was taken of the members of the Class of 1965 in attendance. 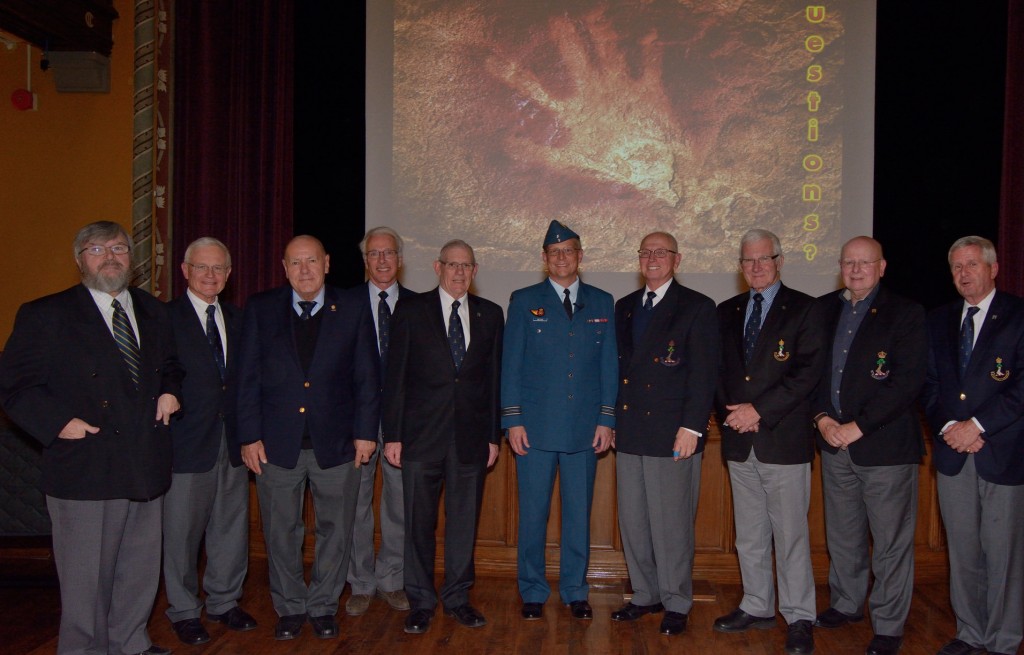