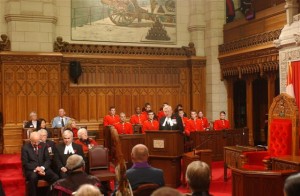 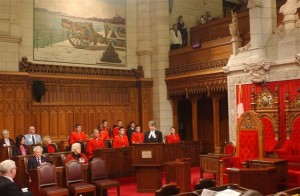 On the 6th of November, nine OCdts, the 5 Sqn Cmdr and I had the pleasure to attend the 12th Ceremony of Remembrance hosted by the President of the Senate. After a couple hours traveling in a mini-van, we were able to stretch our legs with coffee and cookies in hand while waiting for the beginning of the ceremony. It was my first time setting foot in the Parliament and I have to say that I was delighted with the architectural details of one of our national symbols.

In the Senate, right behind the podium, were reserved seats for our stunning red uniforms. Among the crowd was the president of the Senate, the CDS, the Minister of Veterans Affairs, representatives of the Rangers, members of the RCMP, Cadets, but mostly several Canadian veterans. The ceremony was simple but moving. The choir gave a beautiful depth to the speeches which, this year, the had been based on the Italian campaigns. It was the perfect occasion for my fellow OCdts and I to celebrate the courage of the Canadian soldiers. After the ceremony, we enjoyed a snack and some of us had the privilege of exchanging a few words with Gen Natynczyk and the Honorable Greg Thompson.

Later, we enjoyed some of Ottawa’s gastronomy and left for the trip back with mixed emotions of pride and gratitude in our hearts; we still had the rest of our careers ahead of us to write, us too, a page of history. 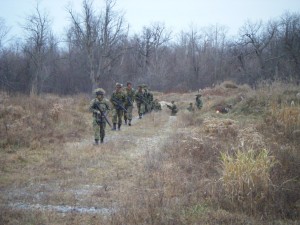 On the 14th of November 2009 First Year RMC cadets got their first taste of field exercises with the CF. Organized and run by fellow cadets, Brock Squadron put on a 12 hour exercise for these young Officer Cadets in order to expose them to the unique challenges of leadership in the field.

The day was filled with lessons and exercises that pitted the First Years, with limited assistance from their staff, against an enemy contingent made up of 2nd, 3rd and 4th year cadets. Both sides were armed with rubber C-7 rifles and glow sticks for grenades.

The day started at noon in the CFB Kingston training area. A series of classes on camouflage and concealment, basic radio procedures, and navigation with a compass were followed by opportunities for cadets to refine their newly acquired knowledge.

This was followed by additional classes on basic Battle Procedures and movements – from the platoon level to the individual – while under fire or in enemy territory. After this the cadets were organized into 2 sections and given the opportunity to combine all they had learned in one final practice.

Once completed, the moment that all of these classes had been preparing these cadets for finally 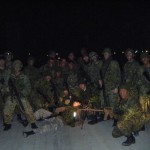 arrived; the next 9 hours would be spent with the cadets taking charge of the leadership positions in the platoon in order to accomplish their missions. However two new factors were introduced into the mix – firstly the sun was setting bringing about the issue of night navigation and manoeuvres. The second was that they would now face an enemy force intent on its own victory.

Three phases would make up the night. Phase One comprised of a platoon assault; Phase Two was patrolling in enemy territory; and Phase Three was an all out assault on a fortified bunker that was preceded by a recce exercise. At the end of the day cadets had been provided with opportunities to demonstrate their leadership in the field under conditions that were foreign to them. This exposure to field operations and the unique challenges that surround them allowed cadets to better hone their leadership styles while under pressure. As a result Nav Ex 09 was a resounding success.

As one of the First Year participants I can assure you that Brock Squadron can’t wait to get back out in the field.

On the weekend of 13-15 Nov, RMC Debating sent three teams and one judge, a total of 7 cadets, to Queen’s University’s Chancellors Cup debating tournament. The tournament had 60 teams (120 debaters) from Ontario, Quebec, and America. This tournament is used by many schools as a preparatory tournament for the World Championship Tournament, and a number of teams present will be attending worlds. RMC did exceptionally well in a such a competitive field, especially considering that this is the first tournament attended by the debate team this year.

The RMC team consisting of NCdt David Reid (4 Sqn, 25243) and Nevin Hotson (6 Sqn, 25192) placed twelfth overall. The other two RMC teams placed 30th and 40th, both impressive performances considering that both of these teams were partially formed with novice debaters (those in their first year of debating, and in this case at their first university tournament). In addition, OCdt Hotson placed 23rd overall in the individual speaker ranking, and NCdt Reid placed 17th overall among tournament speakers. RMC debating performed exceptionally well competing against some of the best teams in Canada, and represented the College and Canadian Forces not only in their performance, but also in their behavior, dress, and deportment.

This event was a success for RMC debating, and reflected very well on the Royal Military College.