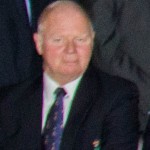 On 15 Feb 1965, a new Canadian flag was raised at RMC and across the country. I was away from RMC that day, so did not attend the celebration. However, the event meant a lot to me because it signaled a major change. A flag of Canada was replaced by a Canadian flag.

Since then I have lived and worked in more than 110 countries. Not once in all that time have I known or heard of anyone – whether they were for or against Canada or Canadians – who mistook the red and white banner with the maple leaf for anything but the flag of Canada. I have been to places where it is not unknown for flags to be flown upside down; our flag makes that very difficult to get away with. A number of times, at international centres and major hotels with a flag rank in their courtyard, I have had complete strangers who somehow learned I was from Canada come up to me and point out the Canadian flag. On business, even in bad places at times of stress, a Canadian flag sometimes appeared at the security wall or the reception desk.

Last November I was in Almaty, Kazakhstan. On a free half day I joined a tour of the city with a number of senior officials of the World Weightlifting Association. We travelled into the mountains to visit the huge dam that protects the city from earthquake-provoked landslides. At its top, we looked down on what surely must be the world’s largest outdoor ice rink. The Fijian in the group, with whom I had struck up a conversation on rugby, pointed out a Canadian flag. It took me some time to ‘find’ it, but when I did it was a very good feeling to see ‘my’ flag, a very long way from Canada. I was a first year cadet at Royal Roads on February 15th, 1965 and a keen naval cadet. So keen, in fact, that I changed duties with a duty flight member so that I could be the very last person to raise the White Ensign at Royal Roads. (Since CSC Royal Roads was also HMCS Royal Roads, a naval base, we flew the White Ensign, although, on that day the flags of the Canadian Army and Royal Canadian Air Force were also flown.)

Later in the day I was a tenor drummer in the band as we stood before the mast, at that time in front of the castle’s main door, while the ensigns of the three forces were lowered and our new Canadian flag was raised for the first time.

If memory serves me correctly, the four squadrons of the Cadet Wing at Royal Roads was formed up at the mast, in front of the Castle, to participate in the official raising of the new Canadian Flag on that day. The timings are vague so I am not sure whether it was at noon on the day or at 9:00 AM to match the official raising of the flag in Ottawa. Yours truly was a first year cadet in Mackenzie Flight, 2 Squadron, that year. I know that I have a picture of that event, but it is buried in the archives (somewhere in my basement). 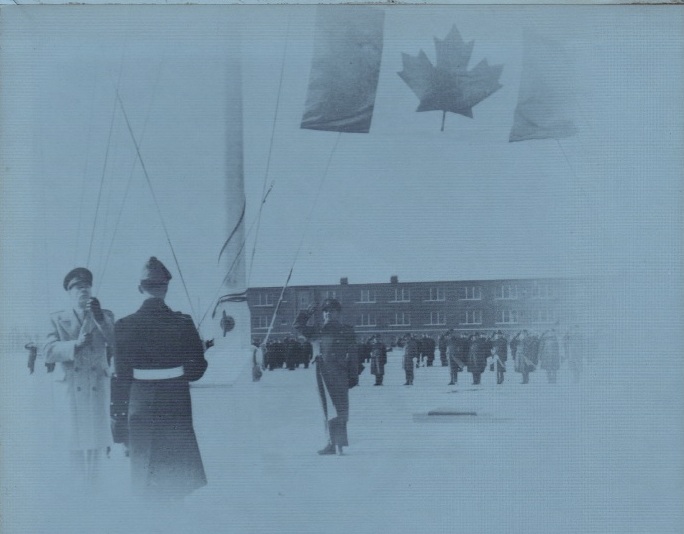 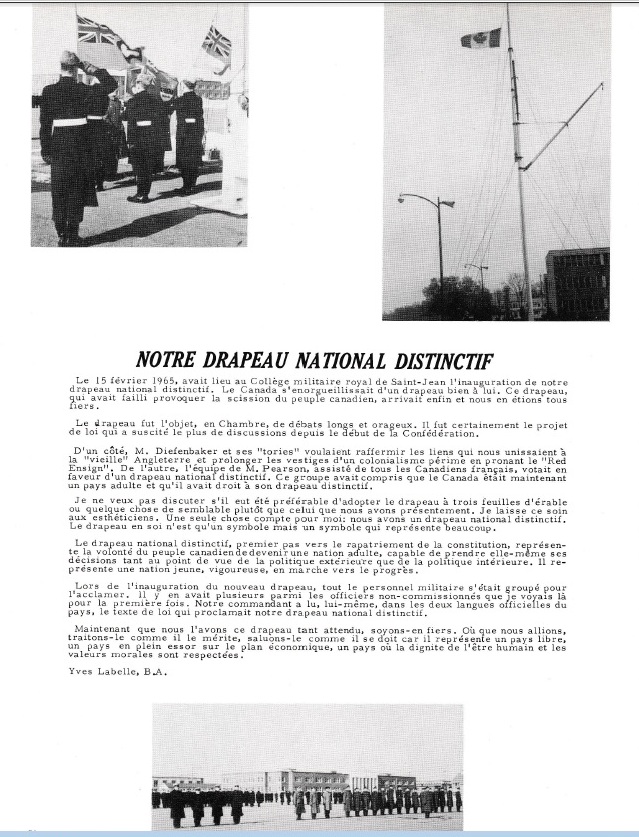 We welcome comments from anyone who has a CMR memory. 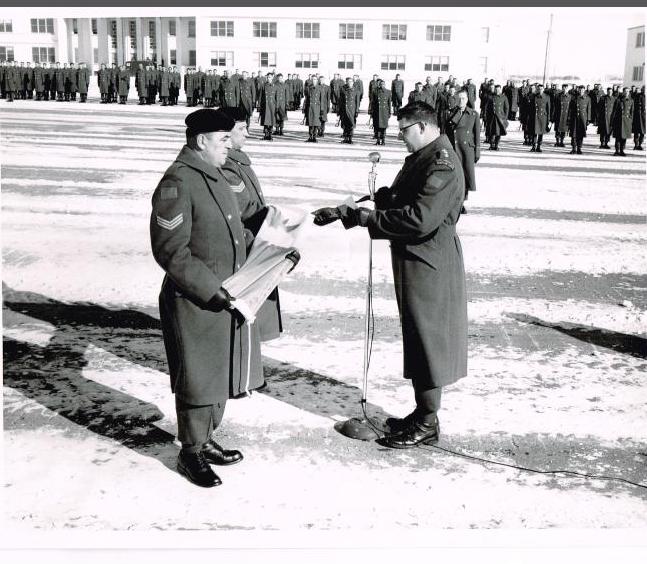 Caption: We are soon to gather on the parade square at RMC to commemorate the 50th Anniversary of our Canadian Flag. It is an important event in the history of our country that created this visual symbol of unity and wherever the flag is flown is recognition of a Canadian presence.

The Flag Day reminds us of so many occasions during these past 50 years when the icon speaks to us and for all of us in joy and sadness, of life and death, and that we are proud to serve under – The Maple Leaf.

Many of us have memory of that day 15 February 1965. How it was observed, where we were stationed, on a navy ship or outside of Canada.

I share my memory that as an army chaplain attached to the Lord Strathcona Horse (RC) at 1200.

The Regiment and I were on the parade square at Sarcee Barracks (Calgary) along with 3Field Ambulance, 1Provost Platoon and 215 REME Workshop.It was my privilege and honour to offer the prayer of dedication before our new Canadian Flag was raised. 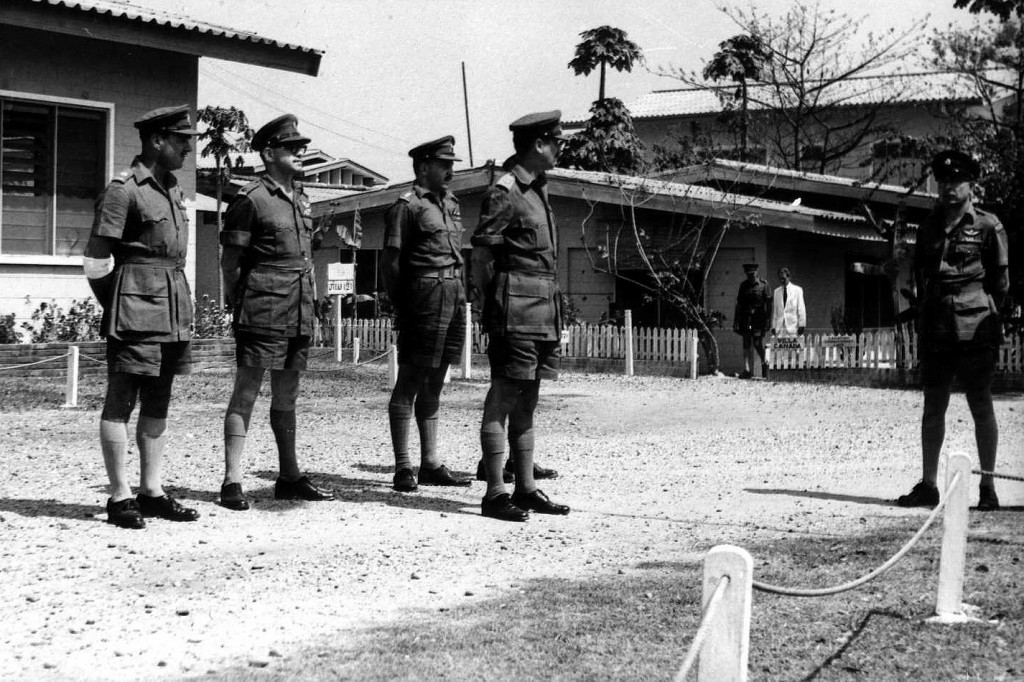 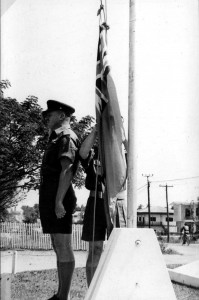 On Flag Day 1965 I was the Camp Orderly Officer in Camp Chambly in Canadian Forces Europe. Hence it was my first duty of the day oversee the raising of the camp flag at sunrise. That morning it was the new flag that was used for the first time. I thought little about it until two months later when I took my family to the Netherlands to visit the Kuckenhof, the world famous garden centre. On arriving I was amazed. The whole front of the Keukenhof was festooned with new Canadian flags. It was a neat tribute to Canada, one that made me realize the value to the future of Canada of having its own “designed and made in Canada” flag. Some Canadian youths reinforced that point in June a couple of years later in Oslo, Norway. I was part of group that had stopped in Oslo overnight on the way to North Norway. We were sitting outside in a sidewalk cafe when a group of Canadian youngsters came by. On their backpacks they had crudely fastened Canadian flags.They were showing the world that they were proud of their country – its new flag and its future. worldwide East of Cape Spear and West of the International Date Line in embassies and Canadian military missions during the the hours before sunrise came to Canada. An example is the one at Vientiane, Laos by the Canadian Delegation to the International Commission for Supervision and Control (ICSC).

The Senior Military Adviser was 2307 The Late Brigadier-General Ken McKibbon. Photo 1 shows the Contingent on parade awaiting the arrival of General McKibbon and the Canadian Ambassador, Don Munro, for the flag raising ceremony. Photo 2 shows the orderly officer saluting the old flag as it is removed from the halyard for the last time and Photo 3 shows the new flag being raised for the first time.

P.S. In the early 1990s I interviewed General McKibbon as part of my research for writing the regimental history of The Corps of RCEME. These photos and the notes that go with them are part of the material he provided at the interview. At that time he gave me permission to use all the material as I saw fit. MCJ