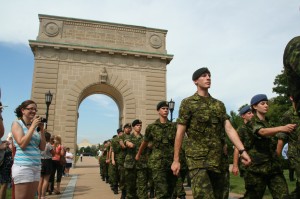 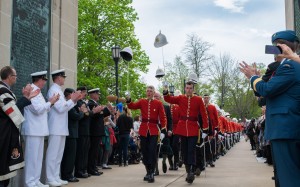 For sure, these same cadets marched ‘in & out’ through the Arch many times over the past four years, but never alone as a Class. Remembrance Day ceremonies, Copper Sundays and other special events, saw them as part of the Cadet Wing which we know includes  – I, II, III & IV years.

The weather for this Commissioning Parade was near perfect. Not too hot, not too cool – slight breeze, a little overcast and no rain in sight.

The only thing better than the weather was what happened out on the Parade Square. The music performed by the band was superb; the speeches were something special but most of all, those in scarlets and the UTPNCMs out did themselves. In a word, they were SHARP during the two hour event.

We had a front row seat, from our third floor office, in Panet House, during the rehearsals over the past number of week or so leading up to the big day.  Between the music, the sounds of the drill movements, including the  feu de joie pratises. (My mind always went back to the General Turner story from his time as commandant)

They kept practising and getting better and you could just sense that it would be an impressive parade. As long, as the weather cooperated.  And it did! 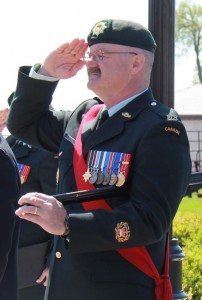 Military Wing Drill Sergeant-Major,  MWO Wallace Rideout was posted to RMCC in the summer of 2012. Consequently, this year was his third college commissioning parade. Last year it rained and the parade was moved inside. It wasn’t a pretty sight.

Two years ago, it wasn’t bad; but it was obvious from talking with the former Long Island, Newfoundland native that he wasn’t a happy camper. He even gave yours truly a tongue lashing because our e-Veritas photographers were not properly dressed.

Indeed, the Class of 2015 owe, MWO Rideout, a whole lot for ensuring that their particular parade was SPECIAL.

A long and cherished tradition at the college is the particular graduating class choose two individuals that have demonstrated over a prolonged period of time – in most cases – all four years. Our keen e-Veritas volunteer, OCdt Danielle Andela made contact with both recipients for the Class of 2015.

See their reaction below.

We also received feedback from at least one graduate with his testimony. We will print that, next Issue and we invite any other 2015 grad to send us their personal testimony too. 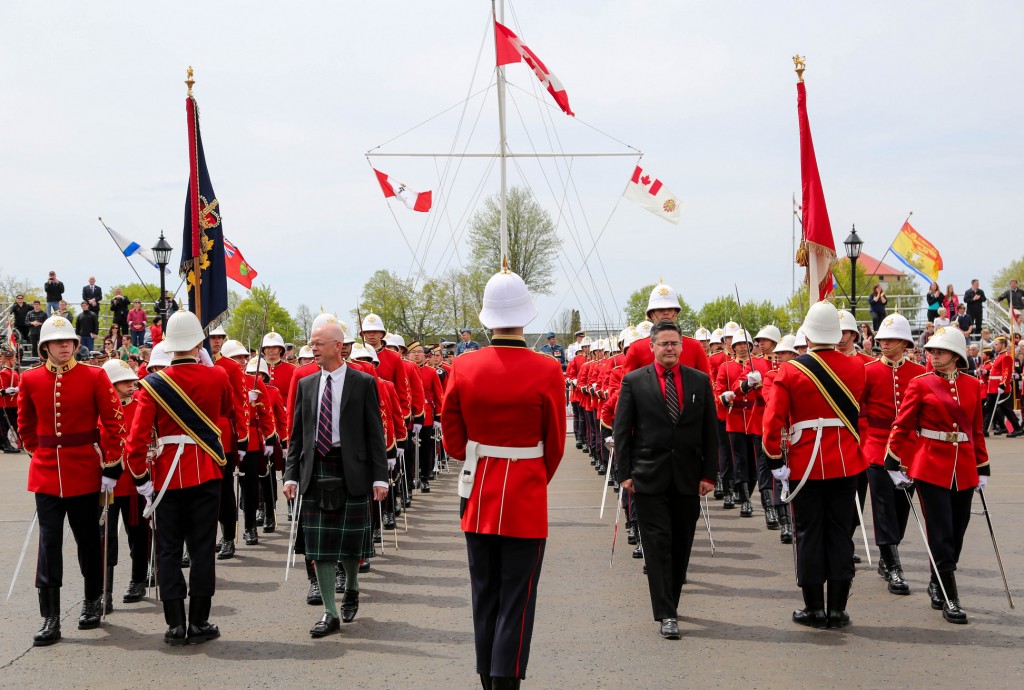 Honourary Graduates: Recognizing Those Who Make a Difference

Speaking to Kenny Greer, Honourary Graduate of RMC, RMC’s “Ultrafan” before Graduation Parade, he gave a brief overview of the nomination meant so much to him and why he is so connected to the college:

“Well you see them graduating, how they came in and they were so scared. They sure do change over four years. I am not so certain that I have enough of a grasp of the English language to say what an honour it is because I know what it takes for these kids to graduate from RMC and the level of respect I have for them as humans is pretty impressive.

I don’t know what to say, I don’t have the words to put into context what an honour it is. I go to a lot of hockey and soccer games, I’m loud, I pump up our players and I chirp theirs. You’re coming on our ground, you’re playing against my kids.

My first experience with the RMC community was with my wife, Naomi Ballance, the associate registrar. She brought me to a game six years ago for our second date and I was taken by the level of compete that these kids put on. They were outsized, they may have been out skilled but they fought so hard, whistle to whistle and I thought that that was an incredible brand of athletics to see.

Then I went to a few soccer games and saw the same level of compete and the same level of passion and knowing what it takes for these athletes to compete at the CIS level. It’s different, it’s different at a different school. If you go to Carleton you don’t have 7am inspections on game day. You have game day, you get out of classes, here you don’t get that, you’re held more accountable. You’re held accountable for how you act in the community.

Don‘t suck and don’t be a stranger.”

After the ceremony, after marching through the arch with the Class of 2015 Kenny Greer had another statement to make regarding his Honourary Graduate status:

“It’s surreal, I know the significance of that arch and I know the work that these kids do to graduate from this school. I know that there’s a real possibility that some of them will come back and have to go down the Memorial Highway in a box and I know that, that arch is for them.

Stroyan Monkhouse also took the time to speak about how he is connected to the Class of 2015: 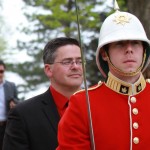 “I was pleasantly surprised and very honoured when I heard about being voted an honorary graduate.

I have been a Nurse Practitioner in CDU3 for the last 4 years- so I have been with this class since the start of FYOP in first year. So I feel a great sense of pride and kinship with this group.

It has been a privilege to watch the graduating class grow and develop – I keep in mind they are going to be the leaders of tomorrow every time I see them.

Looking back, I have learned as much from them as they have from me.

Find something you are passionate about. One who enjoys their job never works a day in their life.” 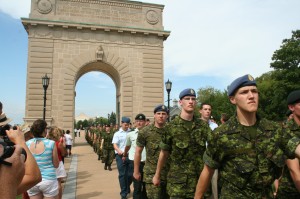 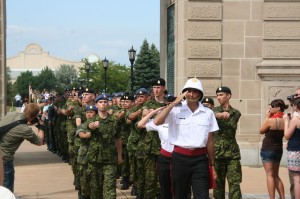 MORE – List of all those receiving a commission & prize and award winners.

The Sword of Honour is awarded to the ROTP/RETP officer cadet of the Graduating Class who best combines high standards of proficiency in each of the four components of the RMCC programme. The sword is donated by GE Canada.

The Department of National Defence Award of Merit is awarded to the graduating ROTP/RETP officer cadet attaining highest standards in each of the four components of the RMCC programme.

The Sword of Distinction for Leadership is awarded to the graduating ROTP/RETP officer cadet who displays outstanding leadership through attaining the highest cadet appointment of Cadet Wing Commander (CWC) in their graduating year.

The Victor Van der Smissen-Ridout Memorial Award is awarded, in conjunction with the Department of National Defence Award of Merit, to the graduating ROTP/RETP cadet deemed to stand highest morally, intellectually, and physically at the Royal Military College of Canada (based on a vote by the cadets).

The MacArthur Leadership Award is awarded to the officer cadet who demonstrates outstanding leadership performance based on General Douglas MacArthur’s credo of Duty-Honour-Country and potential for future service in the profession of arms.

The Generalissimo Jose-Maria Morelos Sabre of Honour is awarded to the graduating ROTP/RETP officer cadet who has demonstrated outstanding dedication and leadership in the attainment of the highest standards in each of the four components of the RMCC programme. The sword is donated annually by the United Mexican States Secretariat of National Defence.

The Navy League of Canada Prize is awarded to the best Sea Operations naval cadet (Maritime Surface and Sub-Surface or Maritime Engineering) in the Graduating Class, based on high standards of proficiency in each of the four components of the RMCC programme.

The Royal Canadian Artillery Association Prize is awarded to the best Combat Arms cadet (Armoured, Artillery, Infantry and Engineer) in the graduating class, based on high standards of proficiency in each of the four components of the RMCC programme.

The Air Force Association of Canada Award of Merit is awarded in alternate years (even) to the best Air Operations or Aerospace Controller graduating cadet, based on high standards of proficiency in each of the four components of the RMCC programme.

The Commander Arturo Prat Leadership Award is awarded to the graduating naval cadet who has demonstrated outstanding leadership, moral values, performance, and potential for future service in the Profession of Arms. The award is sponsored by the Chilean Embassy.

The UTPNCM Award of Merit is awarded to the graduating UTPNCM officer cadet attaining the highest standards of proficiency in the four components of the RMCC programme.

The Military Support Award of Merit is awarded annually to the best cadet in the graduating class from the Logistics, Health Care Administration, Military Police Officer, or other military occupation of the Support Group, based on high standards of proficiency in each of the four components of the RMCC programme.

The Canadian Defence Academy Profession of Arms Award for Excellence in Military Professionalism (CDA) is awarded to a Canadian Defence Academy student for demonstrating excellence in military professionalism, leadership and character, and who has consistently displayed the highest values of the Canadian Forces – Integrity, courage, academic achievement, fitness, loyalty, comradeship and commitment.

The Leinster Shield is awarded to the ROTP/RETP squadron amassing the most points in the Commandant’s Competition, with events involving military, athletic and academic prowess. After each event, the squadron leading in the competition flies its pennant from a designated flagstaff and takes the right-of-the-line position on parade. At year’s end, the winning squadron will take the right-of-the-line on the Commissioning Parade. The position of right-of-the-line is traditionally a place of honour, as this was the unit that lead an army into battle.

The J. Douglas Young Sword of Excellence is awarded in conjunction with the Leinster Shield on Graduation Parade to the Cadet Squadron Leader (CSL) of the squadron winning the Commandant’s Competition. The sword will be carried by the CSL of the squadron until the next graduation parade. The fall and winter term CSL of the winning squadron will receive a commemorative plaque for personal retention. The college number of the Honour Slate CSL will be engraved on the scabbard to permit a continuing record.

The Major-General John Arthur Stewart Trophy is awarded to the top Military Engineer cadet in his or her graduating year whose occupation classification is Engineer (MOC 24) or Construction Engineer (MOC 46).  Sponsored by the Canadian Military Engineer Association, it is based on high standards of proficiency in each of the four components of the RMCC.

The Duncan Sayre MacInnes Memorial Scholarship is a scholarship awarded to the graduating officer cadet who is considered the most deserving of those who accept a regular commission in the military occupation of Aerospace Controller by reason of academic standing, character, and proficiency in occupational training.

The Harris-Bigelow Trophy is awarded to the Fourth Year officer cadet who has displayed the best combination of academic and athletic ability throughout the entire course of study at RMCC. This trophy was given for annual competition by the Class of 1932 in memory of their classmates, No. 2039 T.W.E. Harris and No. 2021 J.G. Bigelow.

The Toronto Branch RMCC Club Prize is awarded to the Fourth Year ROTP/RETP officer cadet who obtains the highest combined marks in Drill and Physical Education during the entire course of study at RMCC.

The Panet Cup is awarded to the graduating officer cadet who achieves the highest average score in all four years in the Spring RMCC Physical Fitness Test.

The Padre W.A. Ferguson Shield of Duty is awarded to the officer cadet who best exemplifies the qualities of civic duty that are the hallmark of an Ex-Cadet, through contributions to the College, the Club, and his/her community.

The Robert Bradshaw Award is awarded each year to the officer cadet beginning his Fourth Year who has distinguished him/herself in the field of mentorship.

The UTPNCM Drill and Physical Education Departmental Prize is awarded to the graduating UTPNCM officer cadet who has maintained, throughout the complete course of study, the highest standard in drill and physical education among those graduating.