It was announced today that the National Film Board would be taking moving pictures of the wing at the P.W.O.R. Armouries. The parade shown was to be the graduating class’s last parade with presentation of prizes by the Honourable Brooke Claxton.

Then the photographers went out for supper and we drilled for an hour (Still no cadets required for filming).

Finally they started doing the cadets by squadrons and it was 2330 before they got to us, the last bunch. And it took about 5 minutes. Never in the past two years has there been such a demonstration of disorganization as there was last night – 8 full hours completely wasted to no avail, no supper, and exams only three days away.

There were a few bright spots however as we got into the Sergeants’ Mess for a few ales before the Staff Adj was able to break it up.

Also both hockey teams had wins last night against Napanee and Gananoque. 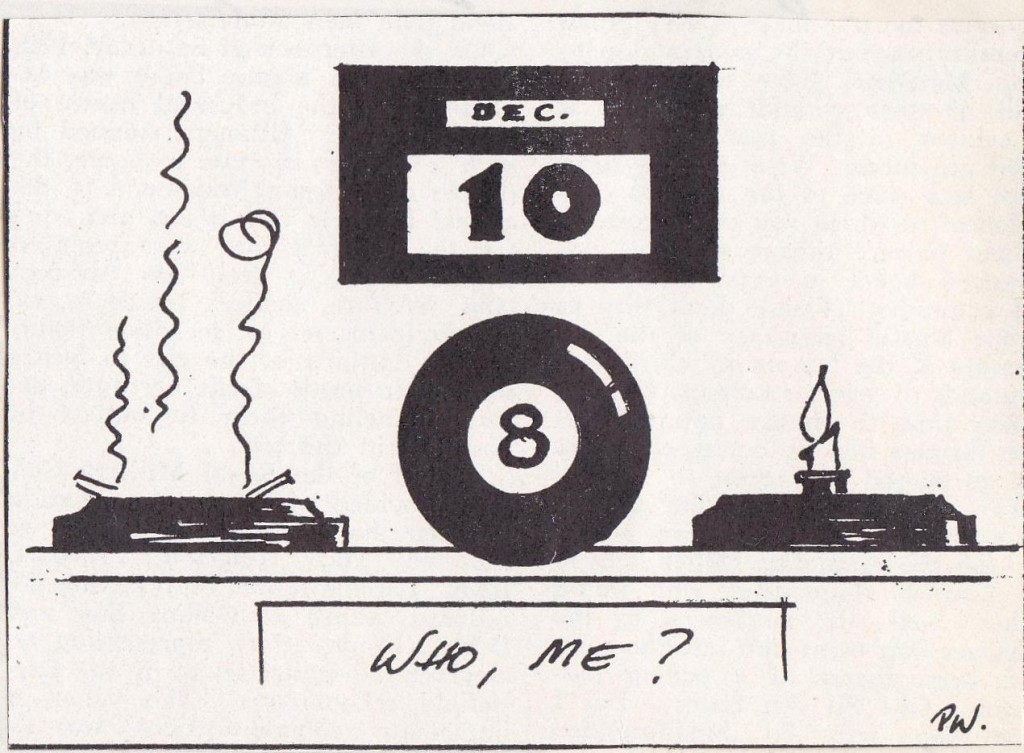 Quite a bit has happened since my last entry – Sunday last I missed a Church parade in Kingston since those of RP were excused. Have written four exams to date and they have been fairly stiff. This year I’m finding it hard to study for these cursed exams. I’ve played around a dozen good games of chess since the exams started. There is a lot of hell going on around the old Frigate and it helps to relieve tensions. We also are up to our old habit of walking around the point after supper. It’s good to get that cold wind whipping your face for a few minutes each night. Yesterday Fritz, Hercus and I walked up to Fort Henry. Today Lt Slocum has moved his office over here into the Frigate so that means less freedom from now on. His little mutt of a dog isn’t house broken and it goes around and leaves little pools of water in cadets’ rooms. It made off with one of my slippers a while back. The Turkey Shoot is in full swing again this year; as yet I haven’t had any luck at it.

Last night the temperature suddenly dropped after a heavy snowfall and this morning a sheet of ice covered the bay and a thick mist kept rising off the open water. It has been the kind of day you’d want to go skiing on. Fritz and I went in for dinner at his place after a dandy service by Lt. Col. Bannister. Tonight Bob Bigelow got the idea of sending in to the “Town and Country” for some food; he got orders from about 20 guys here in the Frigate and had a load of stuff brought out by cab. But we really got a raw deal as they took us for complete suckers. It seems you have to be standing right over these restaurant birds to get satisfactory service – Oh well, it was a good try and they could have had a good business in the trade but they stopped it cold. We write different e____ tomorrow-what a hope! The Marchers came out again and is one of the best issues we’ve had so few.

Accounting yesterday was a real bear! However exams are all over now. Fran came in on the 1:35 train and we spent a pleasant afternoon roaming around Kingston. We went to the dance after dropping over to Diane McPherson’s house with Barry. The dance itself was one of the best yet and I enjoyed myself immensely.

Got away early this morning and buzzed off to the B.A. to see Fran. We were quite lucky to get a taxi in time because the streets were so bad. But it didn’t matter since the train was so late. There was the usual tremendous crowd waiting to get on the train and we didn’t really get settled down until getting to Belleville. After that Big John and Don Green and Scotty provided entertainment ‘til we got to Toronto.