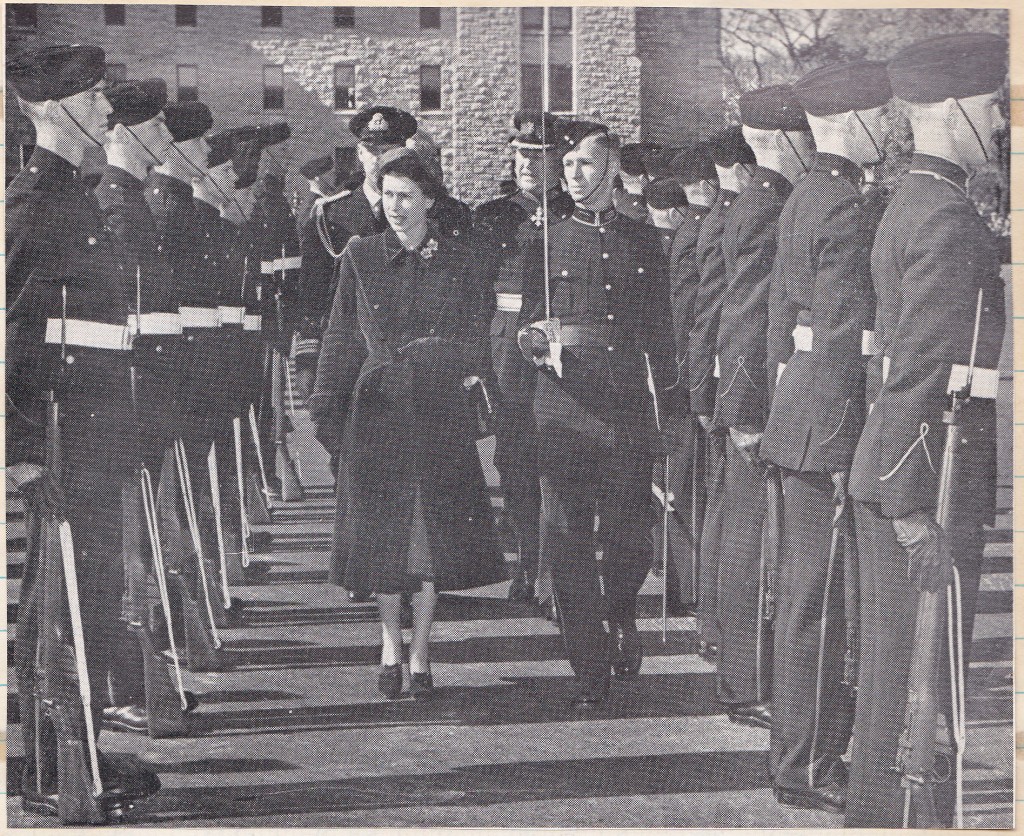 Up early today after a good night at the Delta KE fraternity house and went over by ferry to the Q.C.Y.C. on Ward Island. The races took place in the bay and the wind was very light and changeable. The boats – Snipes. Four races were run off today and we placed third; however after a disqualification we dropped back to fourth. The standing after four races was: MacMaster, Varsity, Queens, RMC. Fran and I then went to dinner at the King Edward where we gorged ourselves on good food and by this time it was too late to do anything else but go home. Phoned the Frigate and got the bad news: RMC-6 Queens-9. Apparently the parade today was a pretty fair one. 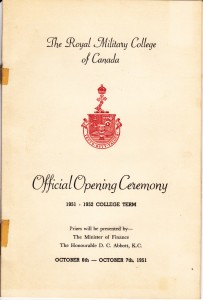 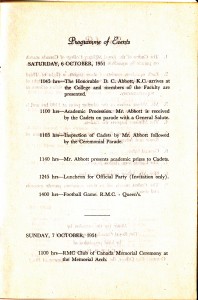 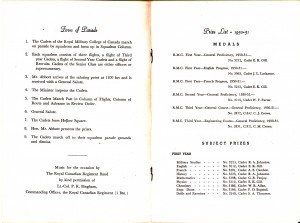 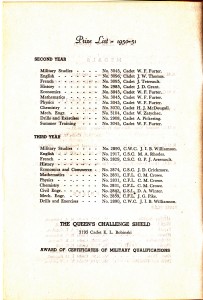 Today it was pouring and a great wind was blowing; Lt Slocum estimated it at a force 3-4 gale. Even the old ferry was rocking on the trip to the island and we got drenched getting over to the Q.C.Y.C. Of course the races were called off and we decided to head back for Kingston early. The other teams have tomorrow off as they hope to race the remaining four races then. The trip back to Kingston was uneventful – we slept most of the way.

There was a big wind blowing here today – whether or not they could sail in Toronto I don’t know. There was a sort of informal mess dinner for Wing Commander Vinnicombe (staff Adj) who is leaving soon. Unfortunately I slept through and missed it.

Went out after classes with Goldie and Grant in one of the sloops. There was a good wind and we used the Jenny jib. I took the tiller for a while and my first chance at steering her was a quite a thrilling one as we were nearly thrown by the wake of a power launch.

After classes we paraded for the last time before the Royal Visit. The R.C.R. band is playing for us tomorrow-and they practised with us. We did everything in detail, even to the details of the cars driving up to the reviewing stand. Incidentally the reviewing stand is a little dais with a canopy of red and white over it. The whole square is ringed with row after row of metal chairs. If things go as well tomorrow as today and if we have a good day it will be the best parade we’ve been in yet. Great preparations for the trip to Guelph tonight and on top of that all the polishing, shining, whisking and whitening for a parade. Walter Scott has now got a cast on his knee and won’t be able to play for the rest of the season. I guess the Queens team was really out to “get” him – damn lousy sportsmanship on their part. Also Palle Kair is out with a bad thumb. We are being cut down by injuries in spite of the fact that we’ve got excellent conditioning.

Starting at 0900 people started to assemble around the square. We turned out at 1115 and the place was busy with brass and gold braid. I do think the parade went very well and comments so far have been very enthusiastic. While we were waiting for the Royal party which was in Currie Hall, the crowd broke over the square and came right up into our ranks. I didn’t really see much of the Royal couple except when we cheered them. Today’s parade will probably be the biggest one any of us will be in for years now if not for life. We left for Guelph at 1500 and got snarled up in traffic jams all the way.. especially at Trenton where Princess Elizabeth had just taken off for Toronto. Finally got to D.A.C. at 1230 or 0030 rather – as Arnold couldn’t come, I was manager for the trip. 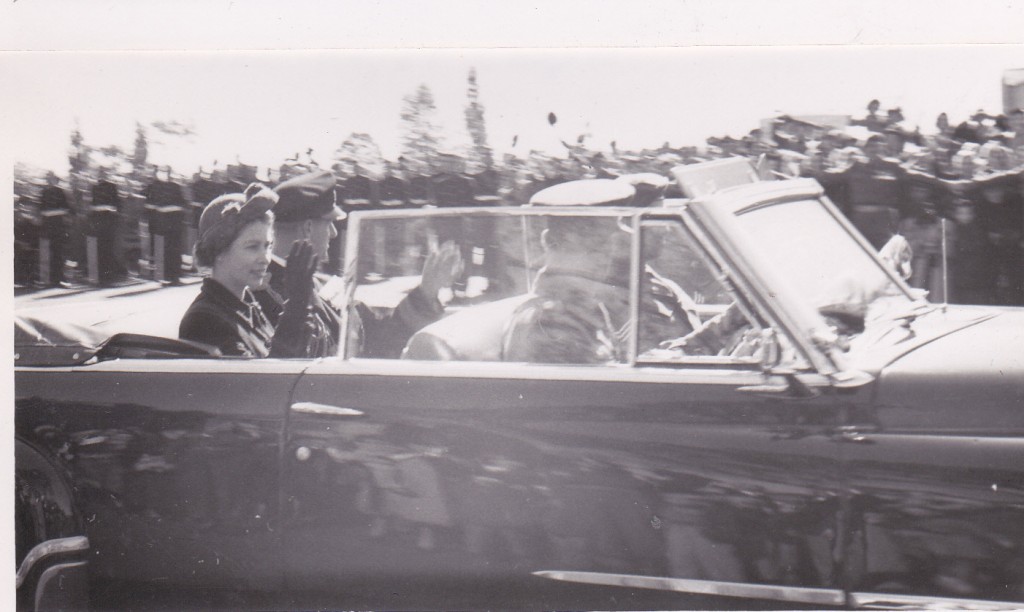 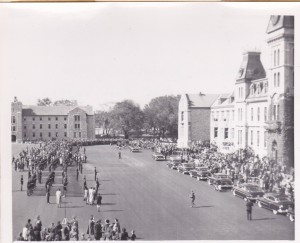 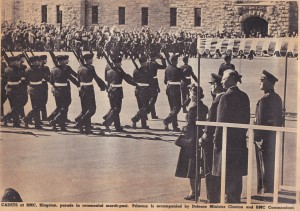 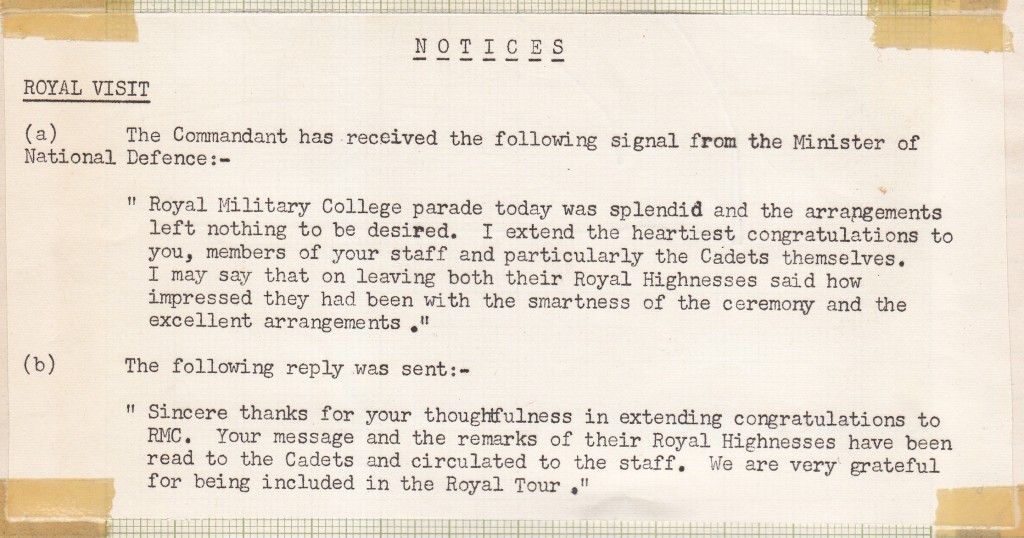