The ball was held Saturday, 21 May (after the world had NOT ended) at the Hyatt Hotel. The event was well attended in general, the entertainment was fine, with many displays of pipers, brass bands, and a swing band for dancing, and the Guest of Honour was Rear Admiral Nigel Greenwood, Commander Maritime Forces Pacific and a 4-year Rodent. While the Van Branch contingent was small, a great time was had by all, and Kate Armstrong was able to connect with 2 of her 1984 classmates, Al Jensen and Joel Anderson. 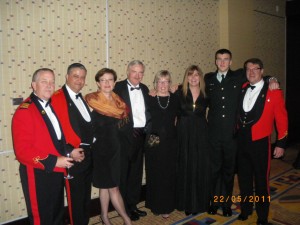