Many readers of eVeritas have requested a guide to the modern cadet orders of dress, after all, there have been a lot changes over the years. So, as requested here is a quick reference guide courtesy of 26497 NCdt (III)Matthew Noonan. 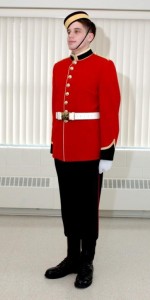 Dress of the Day (Undress)

#5 Uniform – Consists of a white shirt and black pants with red piping on the outer seem. #5’s may be worn with a black jacket or with a black sweater depending on the weather. Worn as dress of the day during regular duty hours and class. Worn with proficiency badges, medals and accoutrements when applicable. Headdress: #5 Wedge (Black with Red Piping), Glengarry (Band/Highland Dance).

Combats/Naval Combat Dress (NCDs) – Combats and NCDs are worn by cadets on the following occasions. Military training, practical classroom labs, during duty weekends as instructed and by the First Aid Response and Security teams during events. Combat dress for the Army and Air Force consists of standard issue digital camouflage with elemental t-shirt and beret. NCDs consist of a blue long sleeved shirt, black pants and steel toed boots worn with beret or naval ball cap is applicable. 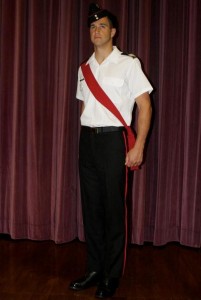 Sashes and Bars – Sashes are bars are worn by senior cadets throughout the college in the following manner.

Bars: worn on shoulders flashes for #5s and on tunic collar for scarlets and #4s.

Shoulder Flashes – Shoulder flashes denote a cadet’s academic year by the number of slashes on them as well as the colour of the patch upon with the slashes are sewn. Example: 3 slashes and an orange patch denotes a third year cadet from 9 squadron.

Pith Helmets – Pith helmets are worn on parade with the scarlet or blue dress uniform by 3,4 and 5 barmen holding parade positions.

Wolseley Helmets – Similar to the pith helmet but with a flat brim and rounded top. Worn by members to the brass and reed band.

Glengarry Hat – Worn by members of the band or highland dancers in place of the #5s wedge, pillbox, or feather bonnet.

Winter dress consists of gabardine, winter boots and Astrakhan (gigantic fuzzy wedges) and is worn as directed in addition to other orders of dress.