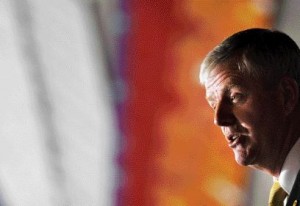 U of G honours Hillier

In his “soldier’s soldier” frank kind of way, retired general and chief of defence staff Rick Hillier encouraged pride in the Canadian Forces.
Yesterday, as he accepted the Lincoln Alexander Outstanding Leader Award from the University of Guelph’s College of Management and Economics, he spoke of the importance of good character.
“I long ago learned that people say bad things about you, you get beaten up, so occasionally when someone says something good about you, I take that too,” Hillier said to a crowd of laughs at the luncheon event at the university.
“I don’t accept it for me, I accept it because I had the opportunity, the privilege, to command and try to lead.”
Calling Lincoln Alexander, for whom the award is named, one of his Canadian heroes, the outspoken Hillier shared successes but also trials faced throughout his three decades with the military.
“Having met my friend before he was a famous general, I said, ‘I have to come,’ ” said Alexander, U of G’s chancellor emeritus.
Calling Hillier “his kind of general,” Alexander recounted how all Hillier wanted from the age of nine was to be a soldier.
Hillier was introduced by U of G chancellor and newly appointed Senator Pamela Wallin. She met with Hillier on many occasions while she sat on the federal government’s Afghanistan commission.
“He knew what was in the best interest of those men and women that volunteered to put their own lives in harm’s way,” Wallin said.
She also touched on Hillier’s reputation for inspiring support for Canadian troops and his ability to make decisions in the face of scrutiny.
“In three decades of service to our country, general Hillier has inspired an unprecedented support for our Canadian troops,” Wallin said.
“He’s increased Canada’s influence on the world stage and most importantly he has changed minds and won hearts about what our troops do.”
Hillier said a career in the Canadian Forces is now considered mainstream.
While growing up, Hillier learned about his great uncle John Clark, who was a member of the Royal Newfoundland Regiment and was buried in Flanders Fields after he was killed during the First World War.
“I found his grave and I have to tell you, it was probably the most emotional moment of my life,” he said.
The memory of his great uncle motivated Hillier to join the military, but through his decades of service he noticed flaws.
Hillier said a clear vision was lacking for most of his time in uniform, something he tried to change as chief of defence.
“We are trying to achieve the Vimy effect,” Hillier said, referring to the courage and respect that Canadian troops garnered during the battle of Vimy Ridge, but also the leadership and tactical preparedness. He also unified the army, navy and air force.
“We knew we were too small to have those silos and if we wanted to achieve effectiveness for Canada we really had to work together,” he said.
It was the military’s performance at home, helping during the 1997 Red River Valley flood, that Hillier said marked the start of a turning point.
With low morale, Hillier started to build the Forces with a focus on communication, inspiration and soldiers’ families. “If the family breaks, the soldier breaks.”
Not shying away from the now more than 100 Canadian Forces casualties in Afghanistan, he recalled the hard moments after deaths.
“But if you walk around with your head down, your bottom lip dragging . . . your organization is going to be exactly that way,” Hillier said. “Continuous optimism is a force multiplied.”
One of the faces in the crowd of university alumni and students was Marion Blackbird, whose son Jeremy recently received a medal of merit from Hillier for his long military career.
“My motivation was to get a picture taken with general Hillier to send back to him,” she said.
Source