… tells cadets about his experiences in Afghanistan 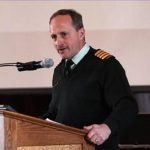 The man who commanded Canada’s battlegroup in Afghanistan in 2006 told today’s crop of Royal Military College cadets that if they expect to be effective commanders on today’s battlefield, they better expect to be shot at.

“Soldiers’ morale improves dramatically when they see generals getting shot at,”  Colonel Ian Hope, an RMC grad himself, told a hall full of cadets at the school yesterday.

A lead-from-the-front commander whose LAV was hit three separate times by IEDs while commanding the Princess Patricia’s Canadian Light Infantry, says the last 100 yards between the sides in modern war is the key ground, and troops won’t take it unless their commander is up front with them.

He noted that it is seen as acceptable for commanders to occupy a rear position and issue orders over radio, but that doesn’t work against insurgents.

“Leadership’s place is on the ground; it is out front with your soldiers,” Hope said. “If it is not there, they will not take that last 100 yards of deadly ground.”

Hope expects Canada to return to the highly mobile form of warfare that was used in 2006 in order to gain the upper hand over the Taliban and break the current stalemate between international forces and insurgents.

Hope’s troops regularly spent 12 to 25 days continuously in the field, fighting a running series of battles with the Taliban, a campaign that during his time there saw more than 500 of the enemy killed or captured.

Against an amorphous and ever-moving enemy, he said it was an effective tactic, removing the troops from roads where they could be easily tracked or targeted by improvised explosive devices or well-planned ambushes while conducting a series of individual security sweeps.”I have seen voice intercepts from the Taliban during my time there of them complaining that they did not know where we were, that they couldn’t track us and keep tabs on us with their cellphone networks,” Hope said.

“I think that’s something Canada is going to go back to in the next six months -that kind of continuous offensive operations.”

It was from his time in theatre that the Canadian Forces philosophy shifted from an anti-terrorist strategy of identifying and attacking discrete cells of insurgents to the recognition that the Taliban are a broad-based insurgency that has to be engaged all through the country, not just militarily but psychologically.

It was also a time when the Canadian Forces started not just fighting the Taliban, but engaging the local population to prove to them they were winning, a task that continues to this day.

“It was never satisfactory to kill Taliban or capture Taliban: the psychological diminishment of the enemy is crucial,” he said.

After a battle, his troops would broadcast calls over loudspeakers calling the Taliban cowards for leaving the fight. They would meet with local citizens to illustrate their control of the space. The gesture was completely understood by the Afghans themselves, a people who are no strangers to warfare and displays of power -and Afghanistan is a war, not a peacekeeping exercise.

“We would stay on the battlefield – they left, we stayed,” said Hope.

Hope, an academic as well as a soldier, who will come to RMC later this year to teach history, said the most important key to victory -and the hardest -is engaging the Afghans themselves in the effort to fight the Taliban and rebuild the nation.

“The biggest problem at all levels in Afghanistan is bringing the Afghans themselves into the decision-making process,” he said, noting that foreign powers are still trying to figure out how government should work there. The first reconstruction plan for the country was a completely unworkable one based on the rebuilding of Germany after the Second World War.

He noted that success in the country won’t be measured in military terms, but by the local civilian population.