From cadets to officers… 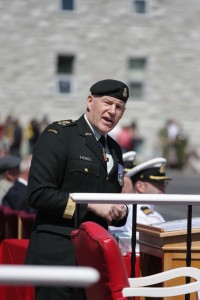 “I have six messages. Three are new and three you know by heart.

1- Confidence and humility. Be confident in your abilities and humble in your strengths. You are a product of the best training system in the world. We would not give you the responsibility unless you were ready for it. But don’t become arrogant. Humility should be your greatest virtue.
2- Listen and learn. Our NCOs are the most capable and experienced in the western world. Earn their trust and confidence and listen to their wise counsel. They’ll only give you advice once! If you don’t listen, then you’ll be on your own. Also listen to your company and squadron commanders, they too are trusted to pass on experience and knowledge.
3- Teamwork. It is all about relationships! Ours is a profession that demands teamwork, be an active team player. Your greatest challenge will be your own ambition.

That was the first three. Now the second three:  TRUTH-DUTY-VALOUR – If you can remember Truth, Duty, Valour, you will be good to go.

Since you arrived here you have learned the College motto’s meanings, you’ve sang them and shouted it, been lectured to for countless hours about the many meanings of Truth Duty Valour and how those that have gone before you have applied them in combat and garrison duty.

Be true to yourself and to others. Do your duty at all times, even when no one is looking over your shoulder – you know the standard! Have the courage to do and say what is right.” 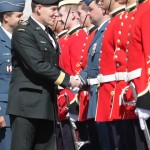 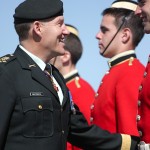 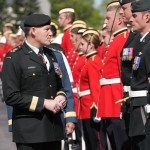 The graduating cadets of the Royal Military College marched off the parade square for the final time Friday before joining the regular forces as officers. A tradition is to march underneath the Memorial Arch on the campus while friends and family wait on the other side.

“It’s going to be a huge advantage to have someone with an aeronautical engineering degree able to have input on decisions, like why you can’t just bolt another gun on a helicopter,”

When Yanick Drouin and his class graduate from Royal Military College this week, they will hold degrees the college has never bestowed before.

They will be the first class of cadets to earn degrees in aeronautical engineering, completing a program for which planning began in 2002.

Drouin and his class of 17 — along with three civilian postgraduate students who will also graduate this week — have spent the past four years studying wings, rotors and engines, testing prototypes in the college’s wind tunnels, and designing unmanned drones.
They will go on to work on the military’s jets, helicopters and other aircraft. Drouin has chosen to work with the CF-18 fighters.

“It was kind of hard being in the first class to go through because you didn’t have any senior cadets ahead of you that you could ask for advice,” the 22- year-old Montreal native said, “but having this program is a big plus for us as we start out careers, that’s for sure.”

RMC’s engineering program has always had an excellent reputation, but Prof. Billy Allan said there was interest among both cadets and the Canadian Forces to produce graduates with the specialized education needed to work on the military’s aircraft and helicopters — and there was also a cadre of professors at the school with air force backgrounds or aeronautical interests.

“When it comes to engineering, we always say it’s not where you study but who you’re studying with,” said Allan, who heads the undergraduate aeronautical engineering program.

While the school always produced engineers who worked in aerospace, it will now graduate the students whose specialty is that area.

“Instead of studying why a bridge is flexible, for example, they have studied why a wing flexes the way it does,” he noted.

Allan said that the military is not affected as much by the sort of boom-and-bust business cycles that affect civilian companies — and universities that produce such engineers.

He said there will always be a need in the forces for people with specialized aerospace training.

The students will work at military occupations, such as pilots, air weapons system engineers and other trades and will have direct input into military decisions, such as buying new aircraft or maintaining and refitting old ones.

“It’s going to be a huge advantage to have someone with an aeronautical engineering degree able to have input on decisions, like why you can’t just bolt another gun on a helicopter,” he noted.

Accreditation for the program is underway and one of the requirements is that it produce graduates before it receives that accreditation.

“I’m so thankful that they allowed us to take part in this,” she said after the emotional march through the college grounds, the rest of the cadet corps forming a scarlet line along the road that the graduating cadets and the Bjerlands walked.

As more than 200 new officers marched off the parade square at Royal Military College at the end of the graduation ceremony yesterday, two participants shared more sadness than joy.

Gloryann Bjerland, the mother of Officer Cadet Lee Burym, marched off the square holding the hand of his stepfather, Michael Bjerland. They were honorary graduates of the 2009 class.

Burym died Nov. 27, 2005, just two months after coming to the college, in a freak sledding accident on Fort Henry Hill. While sliding down the steep hill with other cadets hours after a college ball, his toboggan hit a tree and Burym suffered fatal injuries.

Yesterday, as a show of respect, cadets made the former cadet an honorary graduate and allowed his mother and stepfather to march off the square in the position that her son would have occupied had he graduated.

After the salutes from rifles and artillery, Gloryann, holding her husband’s hand tightly, marched in a sea of red-coated cadets to the Memorial Arch at the edge of the college grounds in the traditional graduation procession.

“I’m so thankful that they allowed us to take part in this,” she said after the emotional march through the college grounds, the rest of the cadet corps forming a scarlet line along the road that the graduating cadets and the Bjerlands walked.

“We had planned to be here for graduation anyway, but for the cadets to make us honorary graduates means more than I can say.”

The two flew in from their home in rural Saskatchewan for the graduation, having last been in Kingston in 2006 when they met with police and college officials to discuss the results of an investigation that determined Burym’s death was an accident, with alcohol not a factor.
More inside:The day in photos; the general and his sonpages 2, 10 Burym’s mother said she knew she had to be at the college yesterday and she said she was deeply affected by the gesture of her son’s former classmates.

“We just think it was so kind that they remembered us and Lee and allowed us to be a part of this,” she said.

Burym was one of three honorary graduates voted upon by cadets — the other two were popular college staff, Chief Warrant Officer Martin Colbert and Jean Blanchet, a personnel support agency staffer and physical trainer who was also named an honorary grad by the class of 2006.

“All my kids wanted it low-key — they’ve got to prove themselves for who they are, not who their dad is — but that said, I’m a pretty proud parent today.”

When Gen. Walt Natynczyk oversaw the graduation of Royal Military College’s class of 2009 yesterday, it was not just as the country’s top soldier, but as one of hundreds of doting dads in the crowd.

His son, John Michael Mundy Natynczyk, was graduating from the college and in a rare moment, Canada’s Chief of Defence Staff was able to present his son with his commissioning scroll on the parade square at RMC.

The protocol was no different than with any of the other 225 new officers who marched off the square yesterday morning — and into service with their new units on Tuesday — save for when Natynczyk was heard telling his son he’d give him his hug later. Generals don’t typically hug junior officers.

With three children following their father into the Canadian forces — almost 30 years to the day that he received his own scroll — Natynczyk explained later that none wanted special acknowledgement, although all in the college would be keenly aware of the young officers’ lineage.

“He wanted it low-key,” a smiling Natynczyk said following the ceremony.

“All my kids wanted it low-key — they’ve got to prove themselves for who they are, not who their dad is — but that said, I’m a pretty proud parent today.”

He thanked the other parents who attended the ceremony for supporting their sons’ and daughters’ decision to join the forces during his speech to the graduating class.

“When people come in they want to go somewhere, they want a career with an adventure, and we’re seeing that with our new recruits,” he said.

“We’re also seeing that in the people we have who have been to Afghanistan.

“I have been to ceremonies where troops have come back, and soon as they get off the parade square, they go up to people in their unit and ask if they can go back next year, because they really feel that they are making a difference in what they do.”

Every graduation has its surprises, and for Natynczyk, it was when a graduating cadet introduced herself, explaining she was born and raised in Sarajevo and emigrated with her family to Canada in 1995, the year Natynczyk happened to be serving on Canada’s peacekeeping mission to the former Yugoslavia.

“Here she is today, not only living in Canada, but graduating from RMC and ready to serve with the same military she saw in her country when she was a child,” he said.

“I’ve always said our military are the products of the best training system in the world, and to see something like that just proves it to me.”