Ex-Cadet Keeps Changing it Up 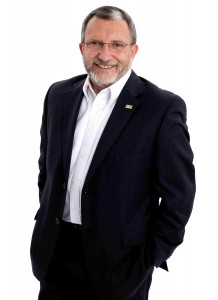 9885 David Bathurst (RMC, Class of ‘74) has been in real estate now for just over five years. It’s his third career after having been in the Navy for 26 years and the IT industry for 14 years. When he retired from the Navy in 1995 he decided to pursue a career in what he loved best – computer technology – and instead of going to work, he went to play to work. He spent the next 14 years first as a database programmer in Oracle with Software Kinetics, and then as a programmer analyst/business analyst with XWAVE, an Aliant company, working on projects for Criminal Offender Management Systems for the Department of Corrections for Maine, New Hampshire, and Virginia in the United States.

In 2008, Bathurst followed his dream of being self-employed and decided to move into real estate.  In his own words, “I have found this to be more of a personal development endeavor as it is really not about sales, but more about who you are as a person, and the service you provide to help clients with their move and making it as stress free as possible.”

The real estate world is constantly changing, and so it involves continuous professional development, training, mentoring and coaching.  Bathurst credits his past work with giving him the tools he needs to succeed. His background from the Navy provided him with the organizational and management skills, along with the understanding of what military families go through when they are posted and moved around the country, and the expertise he gained from the IT industry has allowed him to bring all the current Internet and mobile computing technologies into marketing real estate and managing information, and to assist other agents with understanding and incorporating hi-tech tools in their business.

While with the Navy, he moved more than a few times, with postings to Victoria, Halifax, Ottawa, Toronto, back to Halifax, and back to Ottawa.   Naval career highlights include a year at sea away from home as Staff Communications Officer embarked with the NATO Standing Naval Force Atlantic in 1984, and Executive Office of HMCS Annapolis, transferring it to the West Coast in 1989, and Executive Officer of HMCS Terra Nova, transferring it to the East Coast and being deployed to the Persian Gulf War 1990-91. “Within the span of 12 months,” Bathurst remembers, “our ship’s company had transited the Panama Canal and Suez Canal, and sailed in the Pacific Ocean, the Caribbean Sea, the Atlantic Ocean, the Mediterranean Sea, the Red Sea, and Indian Ocean. The saying is quite true, ‘Join the Navy and see the world.’”

David Bathurst currently lives in Bedford NS, with his wife Irene (Queens 74), and they have two sons, Jonathan (RMC 2004) and Michael (RMC 2006), who are both Combat Systems Engineering officers in the Navy. They are now enjoying their first grandchild. Over the years, he has given back to the community through coaching minor soccer, assisting with Group Committee with the Boys Scouts, and he is currently active in the parish council at his local church.

Emeritus Professor 2785 Harry Messel (AC CBE BA BSc BMilSc PhD HonDSc HonDHI) has had a distinguished academic career in institutions such as the Royal Military College of Canada, Queen’s University in Kingston in Ontario, St Andrew’s University in Scotland, the Institute for Advanced Studies in Dublin, Adelaide University, and as the Chair of Physics at the University of Sydney.

Harry established the Science Foundation for Physics within the University of Sydney in 1954. Over his career he has raised in excess of $100 million through the Science Foundation for Physics to fund valuable research, teaching and learning and to expand the School of Physics. The International Science Schools, which he established in 1962, are known worldwide. Harry retired from the School of Physics in 1987 after leading the School for thirty five years. In 1992 he was appointed Chancellor and then Executive Chancellor of Bond University.

Harry was Senior Vice-Chairman of the Species Survival Commission (SSC), International Union for Conservation of Nature (IUCN), a member of the SSC Steering Committee and Chairman of the Crocodile Specialist Group of the Commission.

11002 Bill Sergeant, Class of ’76, who lives in Barrie, ON, traveled with five other volunteers to India with the Canadian charity, “Sleeping Children Around the World” (SCAW) from 21 January – 15 February 20154. Working closely with volunteers from various Rotary Clubs in India, they helped the ‘100% Charity’ distribute 7,000 bed kits to needy children in 17 villages surrounding Mumbai, Belgaum and Hubli, India.

For Bill, it is his fourth trip with SCAW and second as a Team Leader. He has previously distributed bedkits in the Philippines and India. His had parents travelled with SCAW since 1984. This year, his wife Monika, a CF Veteran, and a veteran of other trips with SCAW, accompanied Bill on this philanthropic trip. It was special this year because many of the bedkits that Bill and his team handed out were in given in memory of his father, a World War II veteran, and his youngest brother, who have passed away just prior to the trip. 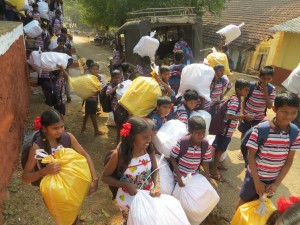 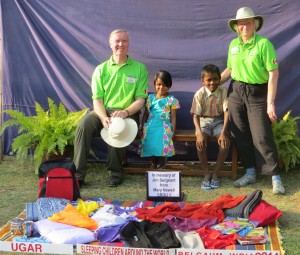 Pictured above are some of the 7,000 children who received a bedkit during their distributions. 100% of the $35 donated to SCAW goes towards purchasing the items shown in the picture. Each bedkit had 37 items in it, including a mat to sleep on and mosquito net to protect them from Malaria.

SCAW is one of the few charities that can claim that 100% of each donation goes towards the bed kits for needy children. It is operated by volunteers, from the processing of donations to the distribution of bed kits. The Travelling Volunteers do so at their own expense and without benefit of a tax receipt. Travelling volunteers supervise the distribution of bed kits, photograph children with their bed kits, and write articles for the donor newsletter. Since SCAW’s inception, over 200 individuals have gone on bed kit distributions. Requisites for travelling volunteers are a love of children and travel experience — with the physical and emotional capacity to withstand this form of travel. All pay their own travel expenses. SCAW offers volunteer information workshops twice a year. If you are interested in travelling with SCAW, please contact us to attend an upcoming workshop at the following link http://www.scaw.org/about/zero.html#travel.

More information about SCAW can be found at www.scaw.org, including how to donate to the charity.