The “In the Service of Canada” Book of Remembrance (page 157) commemorates Captain Edward Ronald (Ted) Bade’s passing and his obituary notes that he was lost on an air rescue mission on Sep 20, 1973 in Telkwa Pass, British Columbia.

In 1994, as part of the celebrations associated with the 25th anniversary of graduation, the RMC Class of ‘69 created an enduring project in the form of an endowment in Ted’s memory. The endowment is managed by the RMC Alumni Association (formerly the RMC Foundation) and the initial purpose was to provide financial support via bursaries to deserving applicants who were paying their own expenses: ROTP cadets repeating a year (as Ted did) as well as RETP cadets.

Starting in 2007 the endowment was unable to distribute earnings in accordance with its stated purpose because policies changed with respect to both ROTP and RETP cadets. As a result, the endowed capital as well as the earnings continued to grow but were essentially “stranded” or “orphaned” within the RMC Foundation as no distributions could be made against the approved purpose. As of January 2021, the endowed capital had reached a total of over $100K and the undistributed earnings stood at over $125K.

Under the leadership of the Class Secretary an analysis was undertaken to address this situation by updating the “purposes” of the endowment. It was determined that this action would require the approval of the donors of the endowed capital. RMC Alumni Association records identified the donors who needed to be consulted and an interim steering committee of classmates representing the three colleges drafted new purposes, a plan of action for distribution of the accrued earnings and direction to the RMC Alumni Association for the longer-term disposition of the endowed capital.

In late May the Bade Endowment donors were polled and unanimously agreed to a series of steps as follows:

The distributions above were executed and acknowledged in June including RRU publishing their gratitude in the university’s newsletter (https://www.royalroads.ca/news/class-69-gives-back-memory-ted-bade).

Effort continues through the steering committee to identify additional opportunities for distributing accrued earnings. In early October a further distribution of $12.5K was approved in support of a Military Heritage Project at RRU championed by 9318 Dave Bindernagel and 10263 Don Lovell of the Vancouver Island Branch of the Ex-Cadet Club. This project will see the procurement and installation of a plaque memorializing ex-cadets of Royal Roads who died on duty in the service of Canada.

The plaque will of course include 7715 Ted Bade as well as 8102 Bill Card from the Class of ’69. Current plans would see the plaque unveiled at RRU in September of 2022 and, in addition to Class of ’69 representation, it is hoped that Ted Bade’s daughter Nikki will be able to attend the unveiling.

The Class of ‘69’s experience over the past year suggests that other classes with Endowment Funds or Class Accumulating Funds might wish to regularly revisit their “purpose” to ensure that donated funds are working as intended. As one Class of ’69 donor commented “I gave so that the money would be put to work…. not to sit and accumulate earnings”.

The 2021 edition of the Class of ’69 golf classic took place the week of 6-10 September, under the sunny fall skies of the beautiful Muskoka region near Huntsville, ON. Hosted by 8061 Bob Morton, we were privileged to again enjoy the beautiful Mary Lake property of Mark & Debbie Pacinda. This is the sixth time we have had the privilege staying on their property and there are no words to express how grateful we are to Mark & Debbie.

After a year-long hiatus driven by COVID restrictions, seventeen lucky members of the class spent the week in an atmosphere of outstanding camaraderie, sumptuous meals (prepared by the assigned “chefs du jour” and support cast), associated adult refreshments and five rounds of golf on challenging and pristine golf courses. A memorable round was played at the magnificent Clublink Grandview golf course with the week’s group photo (attached) following the round.

Mid-week the opportunity was taken to celebrate the birthdays of two of the gang. 8025 Dennis Dart and 8065 Brian Paradis shared the birthday cake (photo attached) with Brian receiving the largest piece of cake in recognition of his being the youngest member of the Class of ’69.

The Friday evening “champions banquet” saw 8023 Dave Cudmore awarded the “golfer of the week” with the presentation being made by 7821 Pete Van Haastrecht, the 2019 winner. This was Dave’s first time attending and it was clear that his membership at the Ottawa Hunt Club has been put to good use.

Planning is underway for the 2022 edition of our event with a decision on the locale awaiting clarification of travel restrictions associated with the COVID pandemic. The experience of the past 18 months has made all of us most grateful that we continue to have opportunities like this to celebrate life-long friendships. 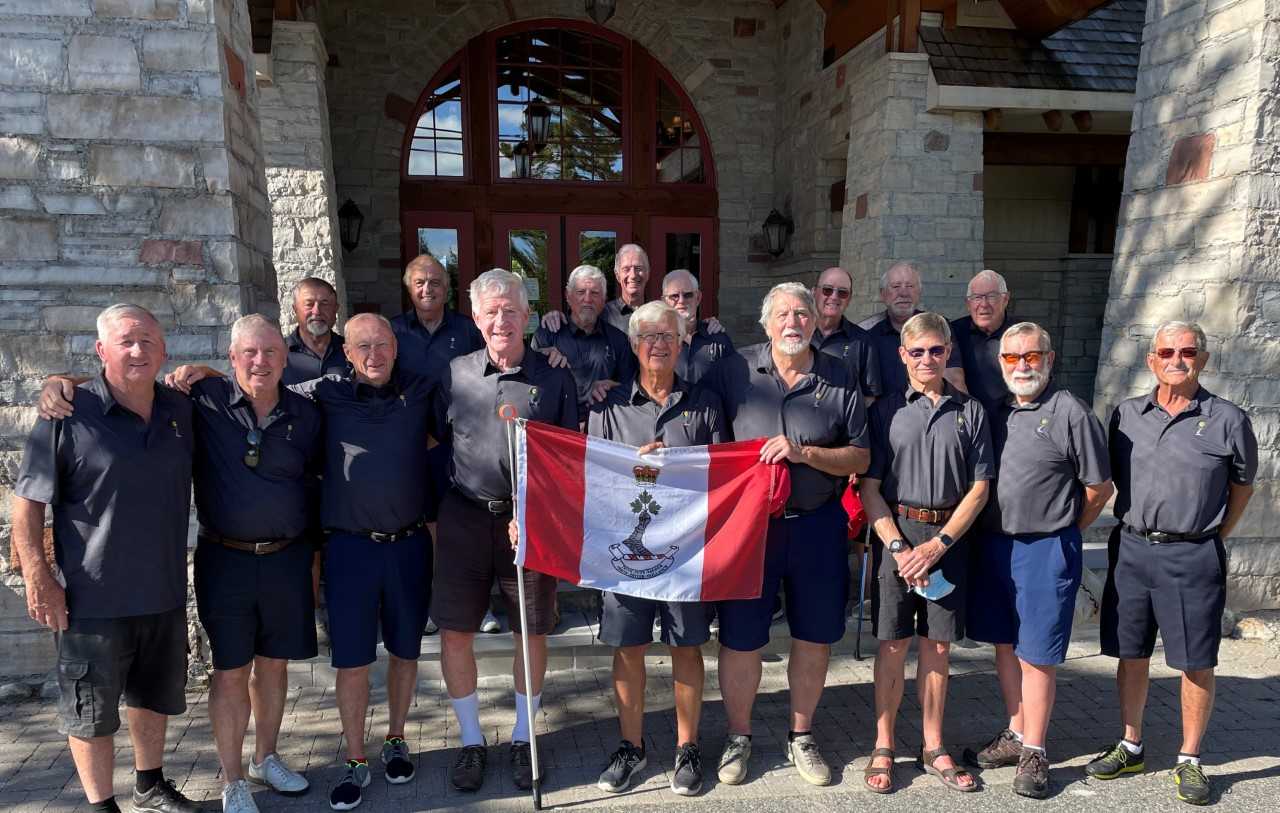