The official start of FYOP

Family & friends waited patiently at the Field House on Saturday (23 Aug) for the arrival of the Class of 2018 to arrive from Ste Jean, PQ. 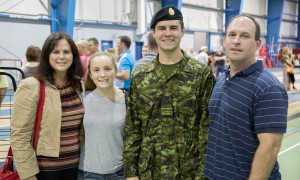 Once the cadets arrived, following their three hour bus trip, it did not take long for family members and loved ones to meet up and embrace. Many a tear flowed as moms & dads; grandparents, siblings and other significant others all caught up with the news. 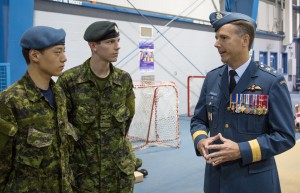 RMCC Commandant, 16888 BGen Al Meinzinger , College Chief Warrant Officer, CPO1 Keith Davidson and personnel from the entire Military Wing and other college staff spent time mingling with the new arrivals and their families & friends. Questions and answers flowed a mile a minute. One had the sense that the visitors really appreciated the personal touch provided by the staff.

A short time later the cadets formed-up outside and made their very first significant milestone together as a Class by marching through the Memorial Arch.

The Memorial Arch was a gift from the RMC Club of Canada to the college; it was officially unveiled and dedicated in 1924.

More on the history of the Memorial Arch.

Parents, families, friends and spectators gathered near the Memorial Arch where the commandant, 16888 BGen Al Meinzinger took the salute. Most of the crowd followed along the Valour Drive leading to the Parade Square; waiting for them there was the rest of the Cadet Wing (II, III, & IV Years).

The formal official welcome was left to the first year Director of Cadets, 19944 LCol Mark Popov. The Royal Roads Military College graduate (Class of ’95) was eloquent in his address – touching all the bases – although the main focus of his message was directed to the new arrivals – he stressed the importance of support from the individual families.

He also had words of welcome to the II, III, & IV Years; and made a point of stressing the high level of support available from the staff, officers & non commissioned members – from all three elements of the CAF – Navy, Army & Air Force.

Over the next five weeks the new arrivals will be busy (to say the least) learning the RMCC way of doing things. Also, officially known as  First Year Orientation Period (FYOP). This will be a big challenge for most, if not all of them. The end of FYOP culminates with the Obstacle Course, Friday 26 September and the badging parade, Saturday 27 September. A can’t miss for family & friends!

e-Veritas will do our best to keep everyone up-to-date on a weekly basis with photos & short articles from different perspectives. As high-lighted by LCol Popov the next five weeks will be challenging; when given the opportunity it will be important for family & friends to provide as much encouragement and support, as possible – even from a distance.

Another page has turned in the 138 year history of the Royal Military College of Canada. Good luck to all the new arrivals.

The Cadet Wing Welcomes the Class of 2018

Families and friends gathered to watch their sons and daughters join the Class of 2018 as they marched through the Memorial Arch on August 23rd. This tradition signifies their first step in a four year long journey to become the next generation of officers in the Canadian Armed Forces (CAF). Officer Cadets (OCdts) who completed their first year at CMR St.-Jean were also welcomed into the second year class, participating in the ceremony along with the new OCdts. Cadet Wing Training Officer, 26167 OCdt Trudel, looks forward to the addition of the new OCdts to the cadet wing and the commencement of the First Year Orientation Program (FYOP).

13909 Rob Mazzolin, Class of 1983, returned to campus to proudly watch his son, OCdt Paolo Mazzolin of 7 Sqn, march through the arch remarks that, “RMC offers a not only a tremendous education, but it is a wonderful opportunity.” After taking a few moments to remember his experience of the orientation program during his years at RMC, Mr. Mazzolin commented on the “amazing transformation that these young officer cadets will undergo in not only the next five weeks but over the course of their four years at the college.”

Also in attendance was Liane Haviland whose daughter, OCdt Celine Faucher, is a new member of 4 Sqn and training to be an Air Force Logistics Officer. Mrs. Haviland is proud of her daughter and says she is happy to finally have the opportunity to see her live out her goals. OCdt Faucher has been planning to attend RMC for over a year and looks forward to all the travelling opportunities the Canadian Armed Forces offers as well as the friendships that will inevitably be made along the way.

All of the members of the cadet wing barslate who were in attendance for the parade would like to congratulate the new officer cadets and wish them good luck during the FYOP training period. We hope that many of the family members and friends can make it back to reunion weekend to witness firsthand the knowledge and skills that will be passed down to them by the senior members of the college.

The parade was presided over by RMC’s Director of Cadets, 19944 LCol Mark Popov, who gave a welcoming speech to the new cadets and their families. His parting words reflect his wishes for the young officer cadets as they start their careers in the CAF. “Train hard, fight easy.”