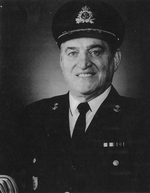 Peacefully at home, surrounded by his family, on January 22, 2013, after a valiant struggle with pancreatic cancer, in his 83rd year. Beloved husband and lifelong partner and friend to Carol (Moran). They were fortunate to enjoy 59 wonderful years of marriage together bound by a mutual respect and a deep and quiet love for each other. A proud and caring father, he is reunited with his daughter Nancy (deceased) and will be remembered in the hearts and souls of his daughters and sons- Mary Beth (Hal), Patricia (Brian), John (Libby) and Paul (Sari). Papa is fondly remembered by his grandchildren Paul Jacob, Parker, Simone, Riley, Olivia, Hilary and Calum and his many nieces and nephews. Predeceased by his brothers Gilles (Margot) and André (Doris) and survived by his sister Dee. He was born and raised in Sherbrooke, Quebec and was a proud graduate from the Royal Roads Military College in 1952. Paul proudly served his country as a dedicated officer of the Royal Canadian Navy, and subsequently in the federal public service in the Departments of Taxation and Transport, Maritime Safety. He also enjoyed a successful career as a Captain (N) in Canada’s Naval Reserve. In retirement he was a keen member of the Hylands Golf Club and gave his time and energy to the Naval Officers Association of Canada while thoroughly enjoying annual winter breaks in Florida. Sincere thanks to the palliative medical staff that cared so wonderfully for him and supported his family in his time of need. Funeral Mass will be held at Resurrection of our Lord Roman Catholic Church, 1940 Saunderson Drive, Ottawa, Monday, January 28th, at 11 a.m. As an expression of sympathy, donations to the ALS Society of Canada would be appreciated. Source: Ottawa Citizen