DODSON, Rick Glen of Edmonton, Alberta, passed away on Tuesday, January 1st, 2013, at his late residence, in his 59th year. Dearly loved father of Lauren Dodson of Edmonton and loved son of Ruby (Glenn) and Hank Dodson of St. Thomas. Dear brother of Darrell and his wife Ann Dodson of St. Thomas and Kim MacGillivary and her husband John of Edmonton, Alberta. Dear uncle of Christopher and Curtis Dodson and Brett and Corey MacGilliary. Rick was born in St. Thomas, Ontario on January 9th, 1954. He graduated from the Royal Roads Military College in British Columbia and then graduated from the Royal Military College in Kingston, Ontario in 1976 as a Lieutenant. He was a Captain in the Armed Forces and a member of the SkyHawks Unit. He did two tours of duty in Cyprus. A public memorial service will be announced in the newspaper. Remembrances may be made to the Military Family Fund. Williams Funeral Home, 45 Elgin St., St. Thomas in charge of arrangements. Condolences may be sent to ahughson@execulink.com.

The Memorial Service is planned for Tuesday, 15 January 2013 in St. Thomas, Ontario with internment in the family plot in Union, Ontario. Source 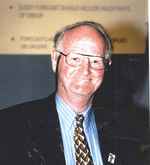 Dearly loved husband of Vicky and father of Libby. Tony grew up in Ottawa. He was educated at Royal Roads Military College in Victoria, the Royal Military College in Kingston, UBC and the University of Toronto. He spent a number of years in the RCAF Auxiliary with 401 squadron in Montreal and 400 in Toronto. After spending some years in industry, he taught in the business division of Fleming College in Peterborough, later becoming a business consultant. He wrote business and educational courses and a successful business text book. Tony loved his family, his home, and his friends and for many years shared his passion for travel with his wife. Tony always wore a smile and would not want people to mourn him. There will be no funeral service. In lieu of flowers donations may be sent to the Oceanside Stroke Recovery, c/o Marie Randall 399 Dorset Road, Qualicum Beach, V9K 1H5. Tony’s family would like to extend their grateful thanks to the doctors, nurses and staff at the Nanaimo General Hospital.  Source