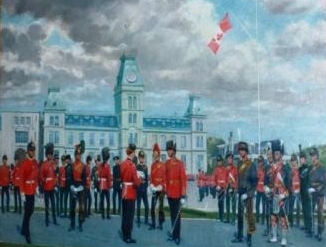 LGen Sir Patrick Howard Dobson GCB (1921-2009), then military secretary (United Kingdom), presented an oil painting, on behalf the British army, to the Royal Military College of Canada on the occasion of the Royal Military College’s Centennial. William Irving, the artist, depicted representative figures from all of the Corps and regiments of the British army in which ex-cadets of RMC of Canada served.

The officers are depicted in their pre-First World War dress uniforms. Although the practice of commissioning RMC graduates into the British army had ceased with the Second World War, there were still enough of these ex-cadets around in 1976 to generate the interest and the funding for such a gift.

A photo of the painting was given to the National Army Museum (London) for their archives. The painting (along with a numbered chart identifying the regiments depicted) currently hangs in the “Heritage Room”, a conference room in the basement of the Mackenzie Building.