Canada Day – A time to help

“This city is our home and we share in its triumphs and tragedies,”

“The men and women of HMCS Regina are highly-trained professionals and are more than capable to take on the challenges that await them on their deployment,”

“I couldn’t be happier to have Arlene become an Honorary Captain,” 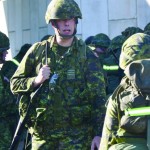 “It is a rather humbling experience that army leadership has seen fit to provide me the opportunity to command soldiers and troops in support of training and education of army junior leaders,”

“I’ve told them all to catch up on that training that lapsed while we had this high operational tempo between Afghanistan and the Olympics and Haiti and Libya, and let’s make sure we have all qualifications and training up to date so when we’re called upon we’re ready to go.”

Some veterans still seeing payments clawed back after court ruling

“This is a perfect example as to how bureaucratic red tape results in needless suffering,” he said in an email.

“This bureaucratic inability to see people through the process, especially highly marginalized and vulnerable disabled Canadian Forces veterans and their families, is unnecessary and illegal.”