Ken Pennie, a former Chief of the Air Staff and superior officer  Article

“I’m excited to have the opportunity to be a part of such a great team that has made the Ottawa Airport the success that it is today and to be back in the National Capital Region. It’s such an honour for me to be a part of the best airport in North America. I am excited to join such an exceptional team that is well-known for consistently delivering excellence in customer service.”

“You try to spend as much time with your wife and kids to try and take your mind off what’s coming up,”

Bill, I keep forgetting to advise you but the e-Veritas delivery makes a good reminder. I don’t know whether I will ever see my grad ring again but it was one of many jewellery items stolen recently in conjunction with a break in @ our home in Orleans. I wonder if there is a subtle way of advising folks that if they see an RMC grad ring in pawn shop or on Kijiji, etc that they could advise. It’s one of the years with the larger, heavier versions. It has light brown background with 1978 as grad year, mailed fist on top with RMC coat of arms on one side and army (crossed swords) with 78 on the other. While that narrows it down some, I had my name &/or college # engraved inside. I think it was B.B. Barteaux & perhaps 11338.

Thanks for your help! On a recent gorgeous day in November the RMC Sailing Club formally thanked 3646 Mr. Fred Simpkin for his very generous donation of his beloved Abbott 22 sailboat. The sun was shining and the wind was blowing across the RMC pier just as it would on any perfect sailing day. Mr. Simpkin arrived to find several people in attendance including Col Saulnier, on behalf of the Commandant; Cdr Mooz; LCdr Antoniewicz; Maj Zimmerman; Christine Powers-Thompson, RMC Athletics; and several members of the Sailing Club. Mr. Simpkin reiterated that he was happy to give back to the College as he very much enjoyed sailing here on, among others, the Akyroyd schooners. This donation by Fred Simpkin was made possible through the RMC Foundation and the Sailing Club extends its thanks to the Foundation for their work on this gift. The Sailing Club is building on this new opportunity and is looking forward to bringing keelboat racing back to campus. Thank you again Mr. Simpkin for your generosity.

Reverend Al Ritchie, father of Alum Greg Ritchie, also offered to donate his sailboat, an Alacrity 19, to the Club. The Club determined that it was not able to accept the generous offer based on the current focus of the fleet. We thank Reverend Ritchie for his generous offer. The Kingston Branch of the RMC Club commorated a month of rememberance with a special presentation by E4613 LCol (ret’d) Arthur Neadow (photo left). After a reading of “In Flanders’ Fields” and A118 Ray Dignum, Branch President, called for two minutes of silence, LCol (ret’d) Neadow used a powerpoint presentation and recollections of his own visits to the battlefields of Vimy Ridge and Dieppe to take the members of the Kingston Branch back to that hallowed ground.

In discussing Vimy Ridge in particular, LCol (ret’d) Neadow touched on the local connection with the Vimy Memorial. “When the models they used for carving the statues were taken down, they were simply marked “Vimy.” The postal service didn’t know where to send them, so they came here. Of the 20 original models, 3 are still here at the Signals Museum.” He also underscored the difficulties the Canadian soldiers faced at Vimy by drawing on his visit there as part of the 95th Anniversary ceremony. “As an old Infantryman, we were always taught to look at the ground,” he said. “The ground at Vimy was definitely not infantry ground.”

LCol (ret’d) Neadow’s presentation also touched on the myths of Dieppe, the “Mulberries” of Operation Overlord, and the Kurt Meyer story. He is, in all likelihood, the only Canadian still alive who had the story of Kurt Meyer from primary sources, and his connections to the story came out as he briefly described it.

25743 OCdt (IV) Stacey Cusan and 25840 OCdt (IV) Tucker Densmore were guests of the Kingston Branch at the Luncheon, as were seven members of the Class of 1960 (see photo below). 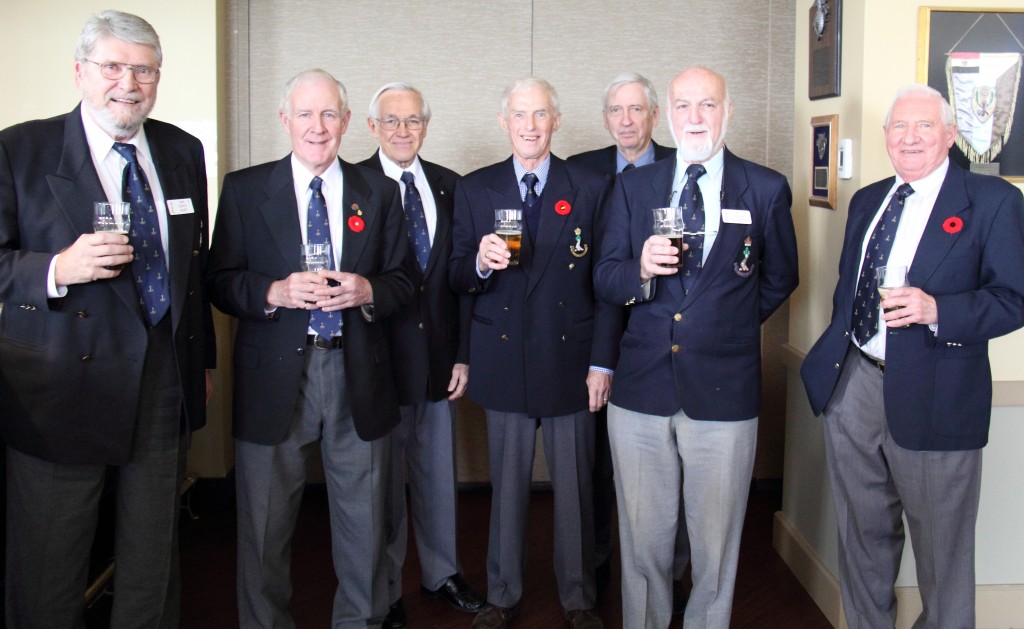 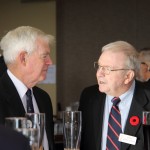 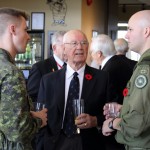 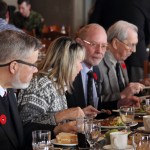 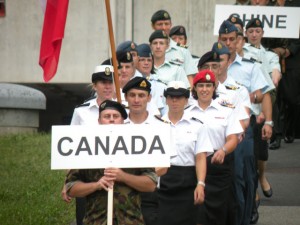 On 25 August 2012 the CF National Triathlon Team competed in the 17th Annual Conseil International du Sport Militaire (CISM) Triathlon Championships in Lausanne, Switzerland. The Canadian Team, consisting of 9 male and 8 female athletes, also included six CMC Ex-Cadets who competed in both the Elite and Masters categories. The Ex-Cadets representing Canada in the Elite category were Capt David Lacombe (23626) and LCdr Trevor Davies (20733), with Maj Eric Travis (19497), Maj John Timmermans (19923), LCdr Douglas Poucher (11947), and Cdr Lucie Tremblay (18417) rounding out the Masters team. This was all made possible by the great efforts of the Team Manager, LCdr Jason Lawton (19870). (Note: Ex-Cadets SLt Aaron Bradley (25005) and 2Lt Andreas Schabetsburger (25509) began the 2012 season as members of the CISM team, but unfortunately were unable to attend the championships due to summer training and recent postings).

The Canadian Team initially arrived in Geneva earlier in the week and after a much needed overnight rest there, was soon transported to the Swiss Army Barracks in Caserne Moudon just north of Lausanne. Apart from acclimatizing to the surprisingly hot and humid Swiss weather, the next couple of days were jammed packed with assembling bikes, team meetings, light training, formal parades, and getting acquainted with the race course in Lausanne (about 45 mins drive away).

The triathlon was an Olympic distance race with a 1500m swim, 40km bike, and 10km run with both Elite (age 20-39) and Masters (male 40 and over; female 35 and over) categories. The race course was very impressive and set up along the beautiful Lausanne waterfront with the world-class look and standards of a typical International Triathlon Union (ITU) race. It also appeared pretty challenging with a long and steep (12% grade) hill in the middle of the bike course, which we knew we’d have to climb eight times during the race! The swim course consisted of a 2 x 750m loop set on the choppy waters of Lake Geneva, with the bike route an 8 x 5 km loop through town, and the run a 4 x 2.5 km loop over a flat and very fast course along the lakefront.

As race day finally arrived on the Saturday, the Canadian team packed the busses with the other 17 nations for the drive to Lausanne starting with the female athletes early in the morning followed by the male athletes in the afternoon. Fortunately, despite the weather forecast there was no rain that day, which would have made the bike course with its large hills extremely treacherous. 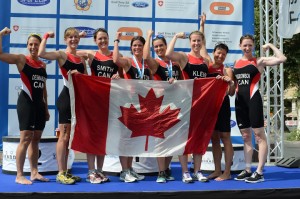 As the ladies lined up for the start there was quite the fanfare when they introduced each of the athletes while they ran down a ramp to the swim start line, all to the boisterous cheers of

the spectators. Soon the Canadian girls were off to a good start and held there own throughout the swim with OCdt Leigh Pinard closing on the lead pack. Unfortunately OCdt Pinard later flatted on the first loop of the bike course and was forced to run her bike back to the start to change her tire. However, with typical Canadian pluck she soon got back on track to pull the rest of the Canadian girls through the remainder of the race. This proved quite beneficial as she helped bring the Canadian athletes up in the standings, especially for Cdr Lucie Tremblayand Capt Jennifer Lawton who moved far enough up to secure 2nd and 3rd places respectively in the Women’s Masters category. At race’s end the Canadian girls clinched an overall 7th place out of 9 teams ahead of the Netherlands and USA, which is especially good considering that some Olympic athletes competed for other teams, such as Brazil and France. The men’s start was just as thrilling and soon found Pte Alex Boulé followed by Capt Lacombe and LCdr Davies battling their way through the strong Elite field. The race was incredibly fast despite the hills with the leaders pulling the pack through a blistering pace, again led by some athletes fresh from the London Olympics. In the end, Boulé fought his way to an impressive 30th place finish out of 70 in the Elite group, with Capt David Lacombe placing 42nd, and LCdr Trevor Davies 50th. In the Masters race, Maj Eric Travis secured an 8th place with Maj John Timmermans 11th and LCdr Douglas Poucher 15th out of 25. The Canadian men’s Elite team also did quite well finishing 9th out of 13.

Overall it was a great experience for all where the Canadians more than held their own, with the Ex-Cadets having an important leading role on the team. Of note is that Canada was also the only team to field a complete male and female team in both the Elite and Master’s categories.  Although the Canadian CISM Triathlon Team will be facing some lean years ahead with a severely reduced budget, it is hopeful that they will be ready for the next CISM World Military Games in Seoul, South Korea in 2015, with both RMC Cadets and Ex-Cadets leading the way!