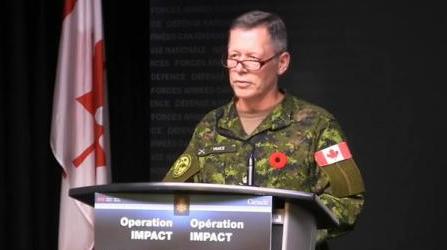 “The rules of engagement that I’m going to use in terms of combatant casualties, is I’m not going to stand before you and tie one aircraft strike to one set of casualties,”

“In situations like natural disasters or armed conflict, the military is often the first and last line of defence for protecting people and property,”

“At 2 Wing, our motto is ‘The Vanguard of the RCAF,’ and we work hard to maintain the level of excellence and motivation to be ready when the call comes to deploy,” –

“For the first time, we had the opportunity to have the Deputy Commanders and key flag officers of our navies get together to discuss some very important issues affecting all of us and commit to working together collectively to leverage opportunities,”

“I first heard of Lieutenant-Colonel Sharpe many years ago, but it wasn’t until I was elected to Parliament for the modern successor to his riding, Ontario North, that I learned the full story.”

March To The Pole airs Tuesday, November 11th at 9 e/p

“Conscription wasn’t a French-Canadian issue. It was an issue across the country.” No doubt I probably missed something in one of the newsletters, but just recently I have come to learn about the new CFOne card that enables CF retirees (and serving members) to take advantage of many discounts, including the waiving of baggage charges on Westjet and Air Canada. I have applied for one and it has been accepted. I believe I, like many retirees, never received an ID card on release and this card now at least partially rectifies that.

Just in case the word has not gotten out to ex-cadets, here is a link to the registration page on the CFWMS web site.

Perhaps, if indeed it has not been done, it would be worth circulating in e-Veritas.

Ed Note: Rolande recently took a train trip from Kingston to Toronto – return. By producing her CFOne card she saved about $40 on the quoted price of $150.