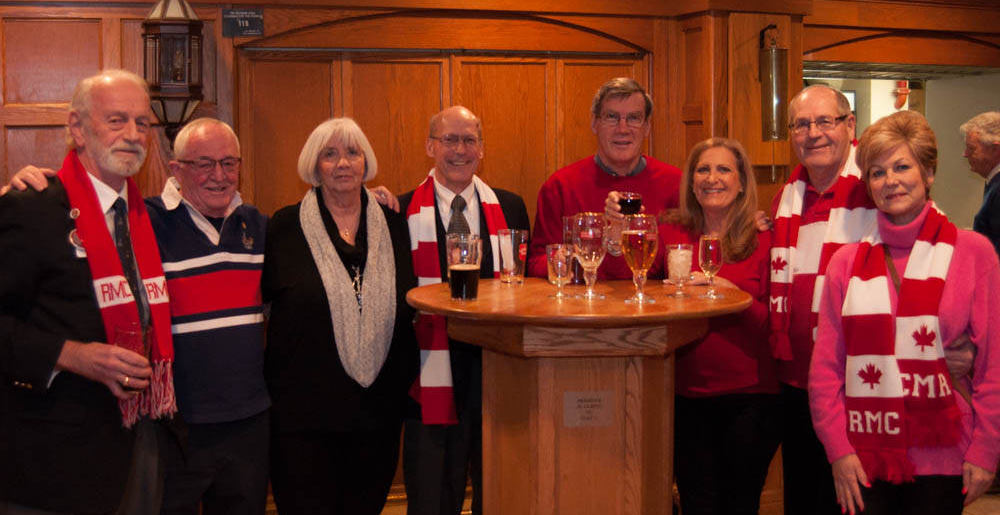 The main event for ‘West Point Weekend’ was the 80th version of the hockey game. Once again, as like two years ago, the RMC Club under the leadership of Bryan Bailey and assisted by Mary Darlington organized and hosted a highly successful pregame social at the Officers Mess – Fort Frontenac – right across the street from the game venue, K-Rock Centre.

A light meal was served and the bar was open for a large group of mainly Ex Cadets – some of whom travelled in from Toronto, Ottawa and south of the border. A gret time was had by all – MORE photos here 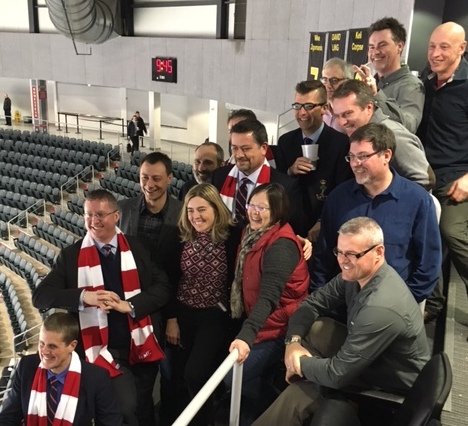 There is talk that many of them will make the trek to West Point this time next year. MORE photos here

Earlier in the afternoon there were two alumni games pitting ‘alumni from both institutions in a 40 & over game, followed by an under 40 age group. The RMCC ‘seniors’ won their affair by a count of 6-3 while our younger squad went down by a 4-1 score.

This was a first-time try in matching the two alumni groups in this type of completion(s). All signs indicate that it was a ‘winner’ all round and there will be a repeat off the Hudson River next year.

The honorary coach for both RMCC teams was Andy Scott who was helped on the bench by Karl Michaud and Mike Jackson.  Rob Riley travelled in from Boston to do the honours for the West Point alumni.

We likely missed a few names. We certainly were pleased by the turnout of Ex Cadets and other Alumni.

A special mention and tip of the cap goes out to Jeff Oke. He led the charge and the organizing a committee to not only get it done but set the bar very high; and added a touch of class which will help to ensure this event has legs for years to come.

For reasons beyond his control our photographer Erik was unable to make it to the K-Rock in time for the 40 & over game.  Tks to Karl Michaud for this one team(s) photo.

A conversation with a former commander of Canada’s special forces

“RMC academics in the news…”

“I decided to collaborate on a project funded by Canada’s Department of Fisheries and Oceans in order to understand the potential toxicity that would be associated with spills of diluted bitumen (dilbit) into aquatic systems,”

RMCC received word last week that 18314 Dr. Jim Denford had a paper accepted by the Journal of Information and Knowledge Management, which is in the top-ten of knowledge management journals. The paper is  entitled “Competing through Knowledge and Information Systems Strategies: A Study of Small and Medium-Sized Firms”.

Also, Dr. Denford was recently appointed for a two-year term as an Associate Editor of Information & Management, one of a handful of top-tier (A-rank) journals in Management Information Systems.