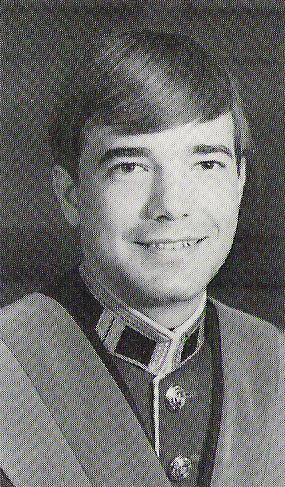 8862 Denny J. Roberts from St. Catherines, ON entered RMC in 1967. Of course, this was Canada’s Centennial Year. It was also the peak of the “60s” – when many of his peers were experiencing perhaps, for the first time, the opportunity to do their own thing.

The 1971 RMC Year Book likely says it best: “Unique, is not the word for Denny. Dennis is one of the few true individuals in the wing who could always be counted on to think for himself. His self assurance is well founded; based on his achieving intellectual independence in an atmosphere of mental conformity.”

By the time Denny graduated in ’71 he had a Civil Engineer Degree and was on his way to another 34 years in the Canadian Forces mostly as a 32A Fighter Pilot. However, his biggest “catch” while in Kingston was his wife Barbara – a Queen’s grad of course. Denny & Barbara have been married for 37 years and have three grown children.

Fighter pilot Roberts followed a successful career path during his military career. However, nothing during his first 23 years of military service would match what he was faced with in 1990 & 1991. He found himself the Lead of the Air Force contingent during the First Gulf War in Doha, Qatar. For his efforts he is a Recipient of the Saudi Arabian Gulf War Medal, Kuwait Gulf War Medal and the Canadian Oak Leaf Cluster.

Life after the CF?: Lead of Raytheon Canada Limited. It is a wholly owned subsidiary of Raytheon Company, has more than 1500 employees throughout Canada that serve the aerospace and defense sectors with a broad range of high technology products and services.

As an aside, Raytheon Canada Limited is a partner of the RMC Club with regular Ads in the Veritas magazine and, of course, e-Veritas – See side bar.

In his spare time, Denny enjoys playing the Trumpet. Ask about his best memories from his RMC days – “Our friends! Always, our friends.” 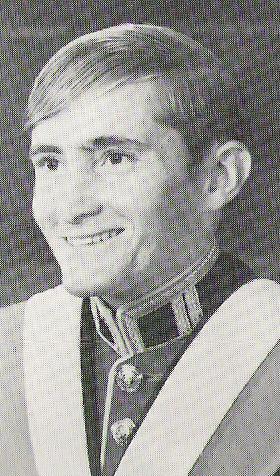 8878 George Wissler (RMC ’71) spent 28 years in the RCAF / CF. He had two passions while serving in the military: flying and playing hockey – not necessarily in that order.

Although he was a small man in stature, he was one of the most respected defensemen in both university and CF hockey circles. Throughout his hockey career, including four sensational careers at RMC playing for “The Maj”, George came to play each and every game.

George has been pretty well “semi-retired” since ’95. Most of his time has been spent in the South Florida area. Although, he and his wife, Carol, bought a house in Eckville, Alberta, in 2005 and they spent the summers of 2006 and 2007 in Alberta. Eckville is just outside Sylvan Lake, half way between Red Deer and Rocky Mountain House.

The rugged defenceman has not played any hockey since retiring. However, he and Carol and have been season ticket holders for 8 years for the Florida Everblades, a AA hockey team in the East Coast Hockey League, affiliated with Carolina and Florida in the NHL. From time to time they follow the team on the road to watch games.

The last hockey that he played at RMC was the varsity hockey reunion, 2003. “I have played a little pickup hockey here, but find the warm outdoors more inviting than a cool rink.”

His RMC “buds” and those who served and / or played hockey with him will not be surprised to learn that George works part-time in a local fitness center. He is as physically fit today as when he was playing for the Redmen at Constantine arena.

Asked about his 28 years in uniform – “Military life – challenging, but an absolute blessing.” 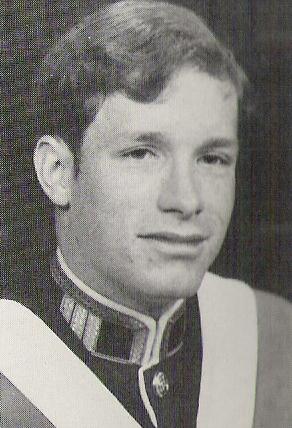 Ottawa native, 10209 “Chris” a.k.a. “Ernie” Chance arrived at RMC via Royal Roads in 1972. He earned a well deserved reputation as the back-bone of the defense of the varsity water polo team. His friendly nature and quick sense of humour won him popularity and earned him the respect of his peers while a cadet at both “Roads” and RMC.

He completed an MBA, (UWO ’83) went to Cyprus and then retired from the Army to join Control Data Canada in Toronto. After 3 years there, moved to Litton Systems Canada for 3 year stint. Left Toronto in 1989 and returned to the Nation’s Capital (after 19 years away, the Prodigal Son). Joined ADGA Systems for 3.5 years and then joined Computing Devices Canada in 1992 and have worked there ever since.

Chris never hesitated in admitting, “All of my jobs have been leads from Ex-Cadets indicating that the network is strong and invaluable. Friendships made in College have lasted forever.”

“My time in the Armoured Corps was tremendous. I still stay in touch with fellow officers, and particularly Senior NCOs who helped to guide me along the way. The fellowship was tremendous. My current job with General Dynamics Canada allows me to keep my finger in the pie (the Canadian and US Armies), and to also live in my hometown, Ottawa.”

How about his personal life? “As probably the Senior Bachelor in NATO when I got married at age 41, I have a wonderful wife who has just retired from the Library of Parliament, so that she can devote her time to planning our retirement time (in the future) in Nova Scotia.”

Best memories from Military College time: “My friends, who have remained my closest buddies all this time. You can never have too many good friends.”

“If you had asked me at Christmas in 1970 whether Military College was “great”, I probably would have had a hard time saying “yes”, but that I really liked all of my classmates. By the end of the year, I had come to the conclusion that the Senior term at Royal Roads (the source of our misery) was made up of a bunch of pretty good guys. When I saw them again a year later at RMC, I realized that they really were great guys (with a few exceptions of course). At the end, I realized it had been a terrific experience that really set me up for the challenges of leading soldiers, and had provided me with a lot of life skills, and that it was a truly unforgettable experience. Thanks for the great memories.” 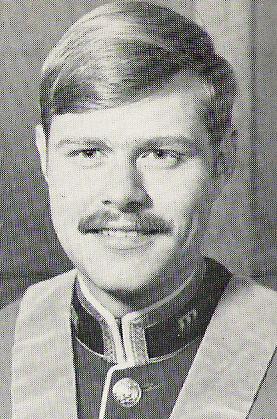 12342 John A (Al) Stewart grew up in a military family. Therefore, it may not have surprised too many people who knew him that he too would “sign up” and start his own military career. It may or may not have been a coincidence that would start at Royal Roads, where his father 3173 MGen (ret’d) John Sr. started his own CMC studies in 1949. During his two years at “Roads” Al was a main cog on the senior rugby team. He also played rugby – only half a season at RMC before an off field (traffic accident) ended his rugby career.

After graduation Al underwent pilot training at CFB Moose Jaw, Saskatchewan and received his wings in the summer of 1980. He then completed the basic fighter pilot course in 1981at CFB Cold Lake, Alberta – flying the CF-5. After a summer of flying the T-33 at CFB North Bay, Ontario he was posted to CFB Bagotville ,Quebec to the CF-101 Voodoo Operational Training Unit. After completing his operational training on the Voodoo he spent the next four years in CFB Chatham, New Brunswick flying the CF-101 with 417 All Weather Fighter Squadron.

In 1985 he was accepted into the sponsored PG program and moved to the University of Waterloo where he completed a MASC in Transportation Engineering. He was then posted to back to RMC in 1987 to teach in the Department of Civil Engineering. Over the next five years he completed a PhD in his part time. Dr. Stewart was then hired as a civilian professor in 1992 and has been at RMC ever since. In 1998 he was appointed Head of the Department of Civil Engineering and in 2002 was appointed to his current position as Dean of the Faculty of Engineering. 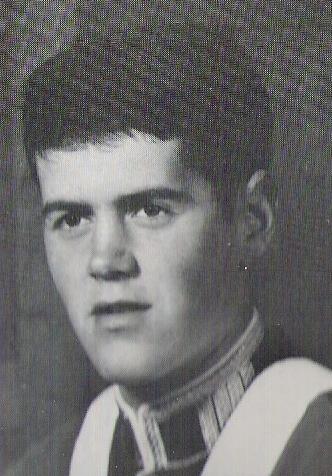 Tim learned many lessons while at RRMC. However, two, in particular stick out in his mind to this very day. He actually refers to it as a RRMC – moment – with Chris Hadfield – trying to put the Commandant’s pony in the elevator at RRMC to put in the CWC room. Lesson 1- ponies do not like riding in elevators. Lesson 2: “Chris (a farm boy) offered to hold the reins in the elevator, and I suggested I push from the rear – lesson – farm boys understand the “business end””.

Between skylarks at RRMC “Timmer” as he was known by his “buds” was also pretty athletic. He was a key member of both the first team soccer and water polo squads. During his two years at RMC he was the CWPMC, S/C & CFL.

He left the military in 1990, and transitioned into civilian life through GM marketing, and Deloitte & Touche.

Tim is now the President and Owner of Polymark Manufacturing back in his home town of Oakville, ON. Polymark is a custom manufacturer of quality polyurethanes. They service customers across Canada, the United States and Mexico.
Polymark Manufacturing is a registered supplier to companies from all industries. Automotive, Marine, and Machinery; Tool and Die; Steel and Aluminum Fabricators; Pharmaceutical, Food and Beverage; Bottling and Packaging; Military and Government; Conveyor and Material Handling; PLUS many other large and small companies.

His parting shot in typical Tim fashion: “as an artsman, do not understand all the fuss about chem and mech engr.”

“Buds” may or may not be surprised to hear “Timmer” just graduated from George Brown chef school. 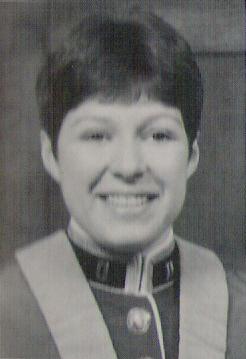 14491 Karen Ritchie was one of the first 32 ladies to enter RMC back in 1980. The Acton, Ontario native ended up taking the “five year” program. She started off in 4 Squadron and spent time in 8 & 3 before earning her Mechanical Engineering Degree. Along the way she held a number of “official” leadership positions within the Cadet Wing – S/C; CSC & CFO. Also, one “unofficial” position – “mother” of an eternal spaz.

Karen is still going strong 23 years after leaving RMC. She is currently Commander 5 Area Support Group (5 Groupe de Soutien de Secteur); also had a three year tour at CFB Lahr / 4 Svc Bn (1988-91); and has great memories from her time as part of Op Apollo in 2002.

Karen was well known to have helped a lot people while she was a cadet, especially the “ladies” who followed in her foot-steps and entered the CMC system. It was always important to her to help the younger women develop their leadership skills and self-confidence, enabling them to realize their full potential while at RMC and beyond.

“My experience in the CF has shown me that women can now aspire to the same positions as men. Though some barriers may subsist in trades where physical strength is a factor, socially speaking, both sexes have to deal with the same challenges, such as finding a balance between work and family life. Not always an easy thing when you’re in the military.”