After this past Wednesday’s Awards Parade, 25366 Mike Shewfelt had the chance to sit down with Maj Robert Parent, College Chief Instructor and the officer behind this year’s First Year Orientation Period (FYOP). e-Veritas: There have been a number of positive changes in the First Year Orientation Period (FYOP) this year. Can you talk about how those changes came to be, and what specific improvements to FYOP were intended for this year over previous years…?

Maj Robert Parent: I think the first thing that must be absolutely made clear is that the success of FYOP this year is due to the growing professionalism and maturity of the FYOP Cadet staff and the overall senior Cadet Wing leadership. It has always been clear to me that RMCC is too big and too complicated an organization for any one individual (or officer) or even group of individuals (Training Wing) to effectively shape, align and influence without the complete buy in (or at least the critical mass / tipping point) of the Cadets themselves. I think this year’s FYOP has demonstrated this over the past 10+ weeks.

Maj Robert Parent: It wasn’t without incident but it was clear that the FYOP leadership were now seeing their collective leadership role in the context of the broader Canadian Forces mandate and governed by the professional precepts of the Canadian Forces. I think a clear indication of this was the response of the FYOP staff to some feedback the Commandant and Director of Cadets had received on some FYOP “legacy activities” which had taken place. I believe it was a testimony as to how far we as a military unit had come when the FYOP Cadets demonstrated both the integrity and trust in the Training Wing to come forward and self correct the situation.

Maj Robert Parent: The process of gaining that level of trust and buy in from Cadets has taken place over four years and has included engaging the Canadian Forces Leadership and Recruit School (CFLRS) to provide basic instruction and training with our FYOP leadership actually being deployed to St Jean for instruction over the past two years. It was my intent and desire from the beginning to “professionalize” FYOP and create a strong and disciplined leadership cadre focused on delivering a well defined course of instruction which combined the best of both worlds; a synergy of the physically demanding and rigorous RMCC FYOP environment with the professionalism and discipline of the CF Regular Force unit (in my case the Battle School and Infantry Battalion).

e-Veritas: What were the challenges you faced in trying to “professionalize” FYOP…?

Maj Robert Parent: One of the toughest challenges within RMCC was to develop FYOP as a separate course and then create an understanding within the Training Wing as a whole that FYOP was “under tactical control” of a separate Training Wing and Cadet Wing FYOP command chain but that it still remained integrated and engaged within the Cadet Wing. It was also a challenge to educate and discipline the FYOP cadre in following a course timetable including a structured Physical Training program. I would say that it has been a collective effort and it could not have been achieved without the efforts of individuals like Kelly Lupton from the Athletic Department as well as Lt (N) Mederios and Major Froess from Training Wing Operations and Training Cell and of course Capt Robie Gourd who was the Course Officer for a brief but critical time this past summer.

e-Veritas: How did this process all come together…?

Maj Robert Parent: The last important element fell into place this past year with the integration of FYOP into the new RMCC Training Plan. This firmly embedded FYOP in a CF course setting and set the stage for all the separate elements of FYOP being integrated into a single coherent developmental process and embedded in the overall development of a Cadet at RMCC. From this new activities like the highly successful “Warrior Race” (again thanks to Captain Robie Gourde) were developed and evolved into the Director of Cadets’ FYOP Challenge (won this year by Fighter Flight of 2 Sqn) which has also been very valuable not only structuring FYOP but in adding competitive focus and energy to FYOP as well.

e-Veritas: I know you have been around the College for a while, and in several different capacities. How does your job as the CI compare with being a Sqn Comd and a Div Comd…?

Maj Robert Parent: The difference between the CI and a Div Comd or a Sqn Comd is like comparing apples and oranges. In my opinion there is no bigger challenge and no greater reward than being a Commander at the Royal Military College of Canada. Working with Cadets and shaping them into junior officers can be a time consuming and demanding job but the rewards are great.

e-Veritas: How would you compare the rewards to other rewarding positions you have held…?

Maj Robert Parent: To myself it is like being a sports coach (and I have been very fortunate to be the RMCC rugby coach for four years and work with the hockey team for two years as an assistant) where you take an individual and develop their raw talent and focus their desire and support their evolution into a more complete and developed athlete. It is not much different as a Sqn / Div Comd. Sometime you give praise, sometimes you have to tell a player he / she is underperforming, sometimes you have to sit a player down and sometimes you have to cut a player. But in the end it is always about getting the individual to commit themselves, and their energies to the team and get them performing to the best of their ability “in between the white lines”. Again I have been fortunate that I have been able to support the growth of many Cadets both on the field and in a military context and that is the real reward of being a commander here at RMCC.

e-Veritas: How do those rewards compare the rewards as CI…?

Maj Robert Parent: The challenges and rewards as CI are much more intellectual and institutional. RMCC is a complex and multi faceted organization and I have been fortunate that I have been able to play a small role in enhancing the RMCC “operational environment” and developing and focusing its “leadership practicum” giving both the Cadet Wing and the Training Wing the tools to command their unit effectively.

e-Veritas: I also understand that your father was a prof at the College. Did being around RMCC influence your decision to join the military…?

Maj Robert Parent: My father was a Sapper and spent over 25 years teaching at RMCC. I would count my four years that I spent on the grounds at Ridout Row as some of the happiest and most formative years of my life. RMCC was then and remains now a perfect playground for someone with a love of sports and a real sense of history (I once found a musket ball in Ft Frederick and prized it as an historical artifact until it was pounded flat by my younger brother). I would say then I was destined for a career in sports and / or the military after those four years on the grounds. The military had to way until I finished with hockey but I have never regretted putting on the uniform.

e-Veritas: In the time you have been at the College, you have obviously seen many Cadets come and go. What do you like about working with the Cadets, and what advice, if any, would you have for them…?

Maj Robert Parent: I would say to every Cadet to ensure that they are engaged at RMCC and that they use their time and all the resources that are here to best advantage to set 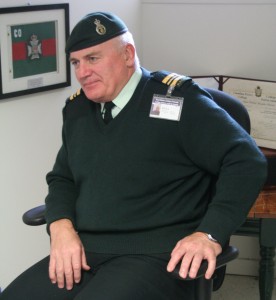 themselves up as professional officers and good citizens.

e-Veritas: Is there anything in particular that you have noticed while working at the College…?

Maj Robert Parent: One of the things here at RMCC that has always troubled me is the “ghost cadet” syndrome. Cadets that opt out of their RMCC experience are both cheating themselves and the CF. I see so many pathways that a Cadet can take to enrich their experience here over four years all of which can support their growth and development as individuals and officers that it seems to me that the greatest mistake a Cadet can make is to turn their backs (for whatever reason) on what should be the most rewarding and fun part of their lives.

e-Veritas: Any last thoughts for the Cadets…?

Maj Robert Parent: I would also say to Cadets have fun…but not the kind of going out for a few beers fun (although that is allowed), but that kind of fun associated with aligning your skills, energy and your desires and mastering a complex and difficult task / challenge. To me fun was knowing I was going to be prepared for the “big game” and going into someone else’s barn (arena) or pitch (rugby field) and crushing them like bugs. So have fun.