The following journal entries are the last in a series which offered day-to-day accounts of the RMCC Expedition Club’s recent 2011/12 Kilimanjaro Expedition to East Africa. Click here to read the full expedition article.

Today the group was off to the small town of Gisenyi which was situated on Lake Kivu.  The border crossing between Rwanda and the Democratic Republic of Congo was very close-by.  It took a long time to navigate out of Kigali and into the Rwandan countryside, but once we were there, it was beautiful.  Rwanda is often referred to the “land of a thousand hills” and the reason for this was readily apparent.  We were surrounded by a beautiful and rich green landscape, and there were hills all around us.

On our way to Gisenyi, we stopped at a center for demobilization and rehabilitation of ex-combatants and genocides recently fled from rebel groups in the Congo.  There, we met with the center’s directors and were given a detailed history of the Rwandan conflict, and  collected statistical and anecdotal information on how Rwanda was slowly letting this who had fled to the Congo in 1994 back into the country through smart reintegration programs. The government had set-up a three month long rehabilitation program to help re-introduce ex-combatants into their old communities. 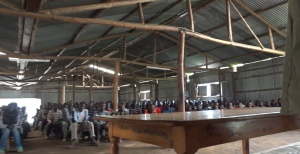 By coincidence, we had visited the center on the first day of a new program serial, and were invited to watch the opening ceremony. The meeting hall was packed with at least two-hundred people, and they were performing a traditional dance when we entered.  They invited us to sit up-front, and watch.  They welcomed us, and volunteered to share their stories.  With our friend Eric Kabera translating, OCdt Matlock, the Expedition Leader, was called upon to address the crowd. Following this, we heard from an ex-major, a female ex-soldier, and an ex-child soldier.  It felt like we were witnesses to a very private event, and to be invited and welcomed so openly was very humbling. It was a very moving experience. 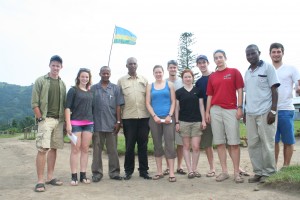 After concluding our visit, we hit the road again and reached Gisenyi by evening.  It was an incredible day, with the rehabilitation center being one of the most important and significant visits of the trip.

The Expedition group chose to divide and conquer on this day; OCdts Kisielius, Paquette, Matlock and Raeburn-Gibson proceeded to Volcanoes National Park to observe mountain gorillas in their natural habitat. Those who remained behind, OCdts Brown, Lane, Allan and Morgan chose to accompany renowned Film Director Eric Kabera as he scouted potential shooting sites for his upcoming film.

OCdts Brown and Allan began their day with a refreshing swim on the shores of Lake Kivu. They were serenaded by local fishermen returning with the nights catch – truly a unique experience. 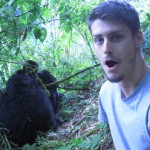 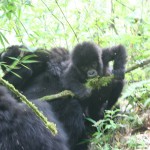 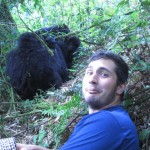 Eric Kabera met the group at 10:30 and drove through the roughest roads of Gisenyi, right along the border to the Congo. He was searching for a suitably rugged setting for a particular scene in his movie. The cadets noted the shocking contrast between the Rwandan side and Congo side of the border. The Congo was chaotic and extremely lively, while the Rwandan side appeared more serene and organized. At times the border between the two countries was demarked by no more than a stretch of yellow caution tape. 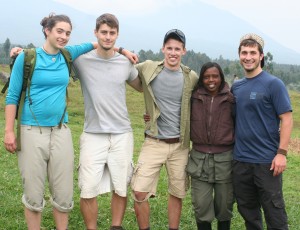 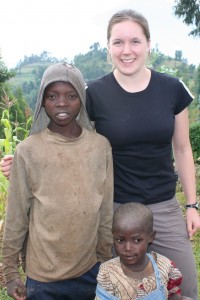 The group then drove to the Vurunga Hotel to do reconnaissance for further filming sites. As the car passed villages and farms, it was necessary to stop for many photo opportunites. The sheer amount of activity along the roadsides shocked the crew; hundreds of bikes carrying anything and everything lined the roads, vendors were abundant and small children ran alongside on their way to and from school. If the car stopped it was not long before hoards of curious children flocked to the windows. 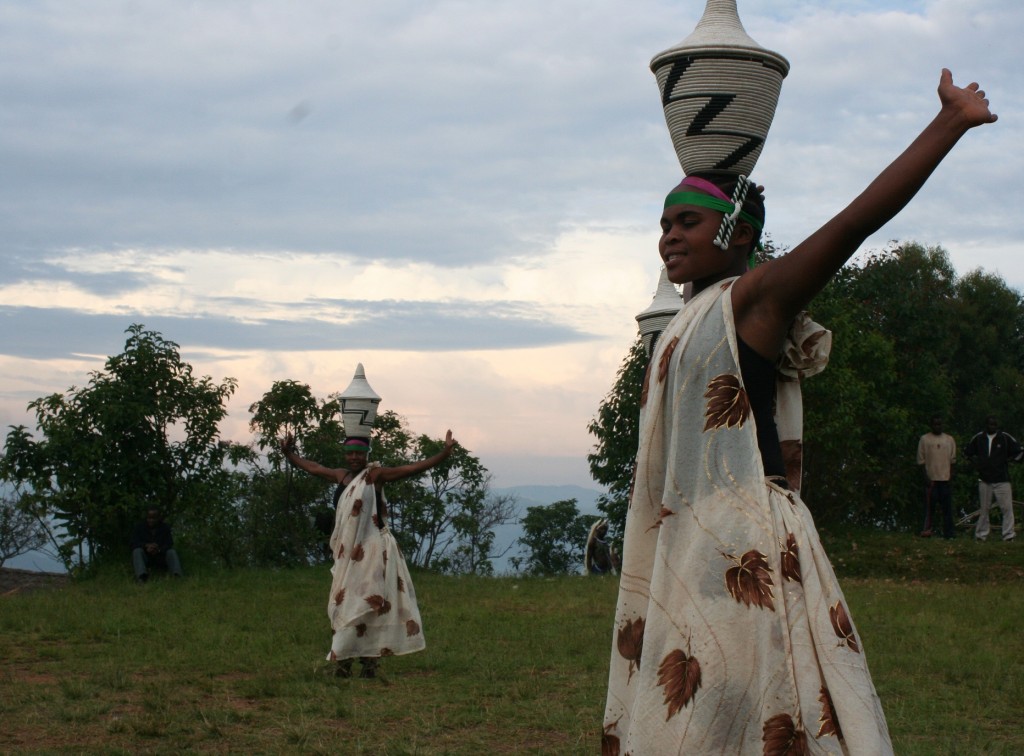 The two groups converged for a delicious luncheon of goat brochette and to hear tales of gorillas. Following lunch the groups separated again and those with Eric continued to the Vurunga Hotel. The hotel was perched atop a towering volcanic mountain. Upon arrival the group walked through a valley behind the hotel, meanwhile faint drumbeats could be heard throughout the valley. The decision was made to attempt to find the source of the drums; the beats led the curious cadets through the backyards and gardens of the village and eventually to the very top of the mountain. There cadets were greeted by an incredible vista of the surrounding volcanic peaks and the colourful costumes of traditional Rwandan dancers. An truly unexpected and wonderful show followed, at one point during the dance all four members of the expedition were selected to join and attempt to match the skilful steps of the locals – all that can be said is that there is a reason that it is an expedition club not a dance club.

Upon their return to Kigali, the entire Expedition group converged to watch one of Eric Kabera’s most notable films, “Africa United”.

Today we visited a local market that wasn’t meant for tourists.  It was massive, and the smell was the first to hit our senses.  The odour of fish and fruit was overpowering in some areas.  The group went exploring, and ventured inside the large building and got lost in the maze of tight alleyways and market stands.  We all loaded up on fresh mangoes and bananas, and Chris tried on one of the traditional dancing costumes.

Afterwards, we headed over to the soccer field with the Canadian flag and some pump-up music to try to save face from our loss two days before and win a game for Canada.  We were all in our black expedition club t-shirts, and looked very military as we warmed up on the field in formation.  As soon as the game began the skies opened, and we all got extremely wet.  Raindrops the size of bullets hailed down and lightning struck around us, but no one paid attention.  Everyone’s focus was on the game, and trying not to slip and slide on the soaked grass. 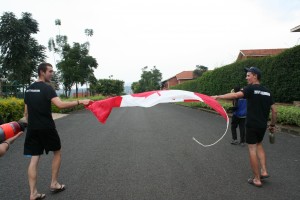 The Rwandan team ended up beating us 5-3, but it was all in good fun.  Afterwards we all took pictures, and thanked them for letting us play.

For our farewell to Africa dinner we went to a place called the Republica Lounge and enjoyed local foods. It was a relaxed, but highly enjoyable day, and we showed our Canadian pride during the soccer match of the year. 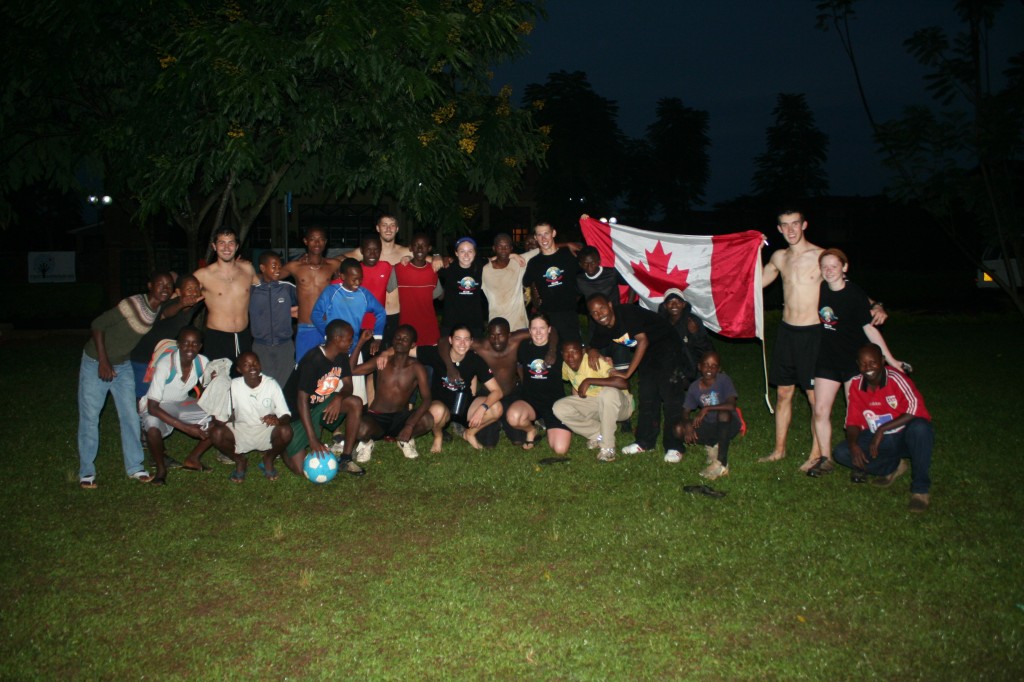 We awoke on our last day in Africa at KWETU Film Institute and enjoyed the familiar breakfast that was ready for us. This final day would consist of visits to Rwanda’s genocide memorials.

The memorials were perhaps the most anticipated part of the trip as they are world renowned for the deep and lasting effect that they create in every person that visits there. The first memorial we visited was called Natarama; a former Catholic church a half hour outside of Kigali which has since been preserved as a memorial to the atrocities that were committed there. At this location in 1994, over 5000 Rwandans fled to this church in the hope that it would provide sanctuary and safety from the acts that were occurring. Their hopes, however, were lost and they were all massacred inside and around the church grounds. As we walked onto this site, a feeling of dread and sorrow seemed to linger in the air and it was certain that none of the members of our crew were ready for what we saw inside the church’s walls. Inside the church, the remains of the victims had been preserved as well as weapons, clothing, and other items. As we stood among the dead, the experience felt almost surreal as we attempted to comprehend what we were looking at and how something like this could have happened. Our tour guide led us around the church and then around the grounds and upon the completion of the tour, he shared with us his personal story as a survivor of the genocide. As he described witnessing the death of his father and the events leading to the dead of nearly his entire family, the most unsettling part of the story was how disconnected and unemotional the man seemed. Clearly, the events had taken a serious and deep toll. 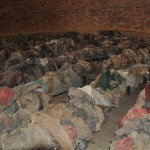 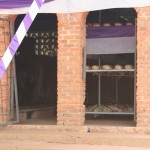 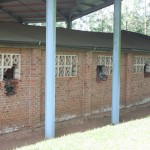 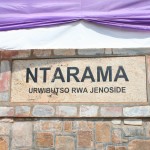 The next memorial was only kilometers away and was also a church, called Nyamata. This tour was conducted without a tour guide which allowed each member of our group to go off on their own and have some time for personal reflection. Similarly to the other church, there were the preserved remains of the events that had taken place here. Situated underneath and behind the church were a series of catacombs in which you could descend and observe the human remains that lay there. It can be assured that none of us will forget the feeling that comes over you as you look upon the rows and rows of skulls within the depths of these graves.

After the tours, the crew headed back to the hotel to pack their gear and prepare to depart. After saying goodbye to the crew at the film institute which we had become so close with, we headed into Kigali for our last meal. This consisted of a buffet of delicious traditional Rwandan food; the perfect final meal before the long plane ride home. When we reached the airport we loaded our gear, said goodbye to Ishmael (our driver), and departed for Entebbe Airport followed by Schipol airport in Amsterdam, and then finally Pearson Airport in Toronto. We arrived at 1530 on the 15th of January and then took a DND van for the last leg of our journey back to RMC. And just like that we were back.