The Royal Military College of Canada has witnessed yet another remarkable Legacy Dinner. Alumni, family, and officer cadets alike were in attendance at Yeo Hall this past Thursday for the annual dinner. This year, dignitaries included H7543 Senator Joseph A Day, S151 Senator Hugh Segal, and LGen Andrew Leslie.

The night’s theme was entitled Building the Margin of Excellence, and this involved recognizing the achievements of S161 Dr. Roy Pottier in research, 23988 Gino Bruni in academics, and H25917 Maj (ret’d) Danny McLeod in athletics. These acknowledgements complemented the welcoming of the Class of 1965 into the Old Brigade. Master of Ceremony 17192 Sylvain Leblanc suitably reminded all of those present of the extensive support that this particular class has provided to the RMC Foundation over the past 44 years.

Other highlights included the introduction of Dr. Nikolas Gardner, the first recipient of the Class of 1965 professorship, and the presentation of two medals to Dr. Sean Maloney (see article below) for his work in Afghanistan. The Wurtele Bequest – No. 1 Fund was unveiled by Foundation President 9660 Cameron Diggon, and generous cheques were presented by both the Ottawa and Calgary Branch presidents. This year’s Leonard Birchall Leadership Award was given to former Canadian diplomat Christopher Alexander (see article elsewhere on this post), and the night was capped off with an outstanding speech by Senator Segal.

Although the Legacy Dinner was just one of many special events that took place over Reunion Weekend, it will be fondly remembered by all those who attended. It paved the way for a memorable few days in Kingston, and it maintained the high standard of class that will undoubtedly be looked forward to in one year’s time.

Hats off to 5533 Glenn Allen, his committee and staff workers from Panet House – truly a great show! Pictured are many from the Class of 1965 who gathered following the Legacy Dinner this past Thursday night. All in a light mood realizing that they would  be entering  the Old Brigade on the weekend. A special note. The gentleman in the front row with the red bow tie is former RMC Principal, H24263 Dr. John Cowan an honouary member of the class of 1965. 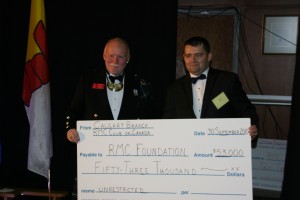 Top Left – Digger MacDougall presenting a cheque to Cameron Diggon, President RMC Foundation on behalf of the Ottawa Branch of the RMC Club of Canada. Knowing the emotional link every RMC Ex Cadet has with the Memorial Arch,the Foundation Board decided to create the “Number 1 Fund” to commemorate not only AGG Wurtele, but also all of the Wurteles who have graced this College. Tim Sparling (right) with Cameron Diggon with a cheque for the Wurtele Fund. Monies from this fund are used exclusively for maintenance, repairs, and restoration of the Memorial Arch. The money will be placed in an endowment fund and the funds generated by this endowment will be used for the annual maintenance of The Arch.