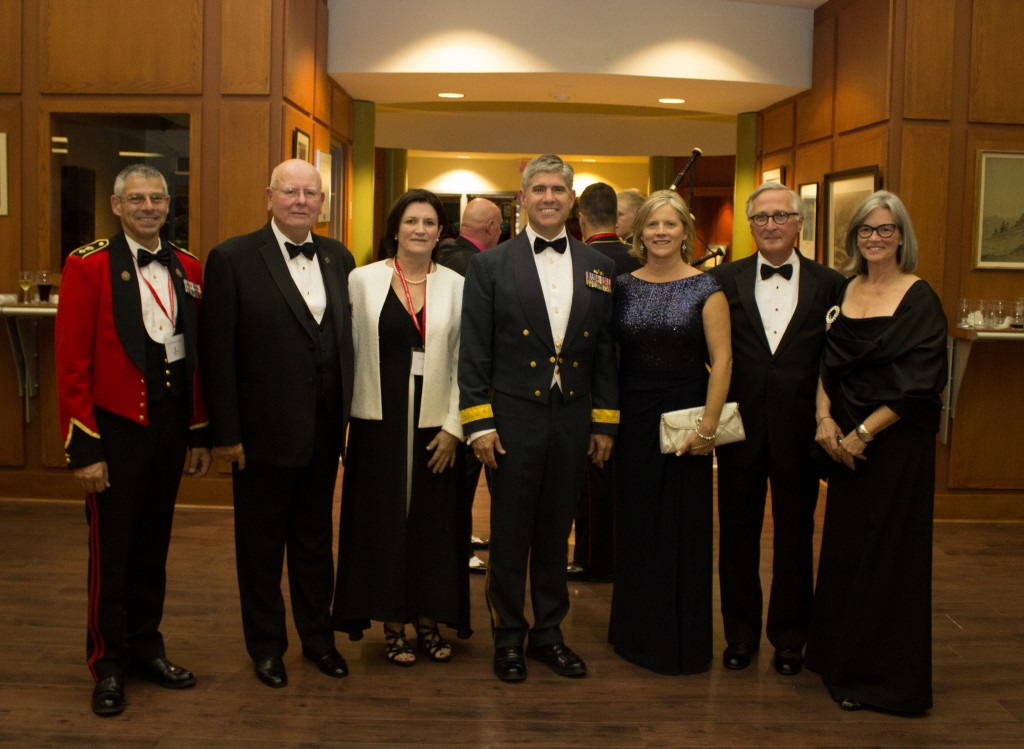 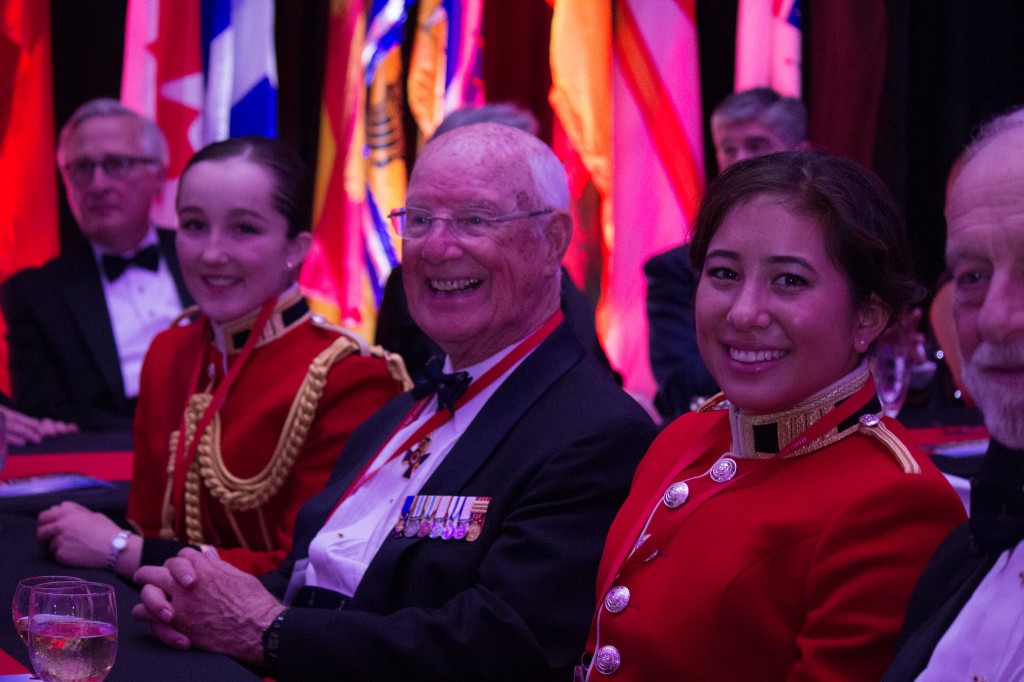 “My name is Officer Cadet Wuerth (photo left), and I’m a 3rd year student in Electrical Engineering at RMCC. I’m also one of BGen Friday’s Aide-de-Camps, hence why I attended the 18th Annual Legacy Dinner. As Aide-de-Camp, I had the opportunity to sit at one of the VIP tables, right next to the head table. That being said, I had the honor of sitting beside my sponsor, 2908 MGen (Ret’d) Al Pickering (photo centre), as well as in front of the Principal of RMCC, 14458 BGen (Ret’d) Harry Kowal.

We spent most of the night discussing our individual RMC experiences and RMC traditions such as Barmen Bowling, lunchtime announcements for which everyone had to be present, that time when someone put a sailboat in the Haldimand Pool resulting in cancelled swim classes, throwing your classmates in the lake when it was their birthday… the list goes on and on. All this to say that many laughs were had. As an OCdt, the Legacy Dinner truly was the ideal place to connect with members of past graduating classes and exchange stories, picking up tips and tricks along the way for my future career in the CAF. I would like to thank the RMC Club and the RMC Foundation for the wonderful night had by all, and for the sponsorship.”

“I’m OCdt Devon Warner the Cadet Squadron Leader for two Squadron. I had the honour of being invited to the annual Royal Military College Legacy Dinner. It was my first time attending the event and I suspect it will be my last as an actual cadet of the College. It was an enriching experience to be surrounded by such successful people who have not only shared the same trials and tribulations as myself but share the same outlook towards the valuable skills that RMC had taught them. It was undoubtedly an occasion that I will not soon forget and one that I intend to seek out as a future alumnus of the College.”

In honor of our fallen 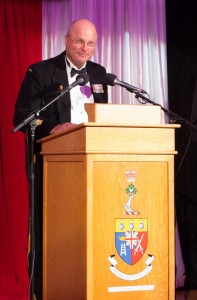 Reunion weekend is a multi-faceted event that provides several distinctly different opportunities for the colleges X Cadets. On one hand it’s an opportunity to welcome and connect with the newest of our future leaders to the RMC fraternity, reconnect with colleagues, old friends and others who have or will share in something truly unique and remarkable. On the other hand reunion weekend allows everyone who participates an opportunity to pause and honour sacrifices made and to pay tribute to our fallen.

In Canada’s modern history, from the boar war to our contribution in the fight against terrorism in Afghanistan, our fallen number more than 112,000 sailors, soldiers, and aviators. Greater than 300 of these fallen were X cadets from the Military colleges system. The first to fall was No52, Capt Willam Grant Stairs on the 9th June 1892. 100 years tomorrow, No. 947, Lt MW Brown, was killed in action at Loos , France. He was a member of the 1st Battalion Leicestershire regiment. The unfortunate reality of our profession of arms would suggest that the last has yet to fall.

In honor of our fallen, I thought that I would share with you all, a portion of a poem written by Robert Laurence Binyon, an English poet who was significantly affected by England’s losses at the beginning of the First World War. This poem is considered to be one of the most famous and enduring war poems of our last century. Coincidently it’s called “The Fallen”

They went with songs to the battle, they were young,

Straight of limb, true of eye, steady and aglow.

They were staunch to the end against odds uncounted,

They fell with their faces to the foe.

They mingle not with their laughing comrades again;

They sit no more at familiar tables of home;

They have no lot in our labour of the day-time;

They sleep beyond England’s foam

They shall not grow old, as we that are left grow old:

Age shall not weary them, nor the years condemn.

At the going down of the sun and in the morning

We will remember them.

To our fallen comrades, nos comrades Disparu, Bless them all. Merci 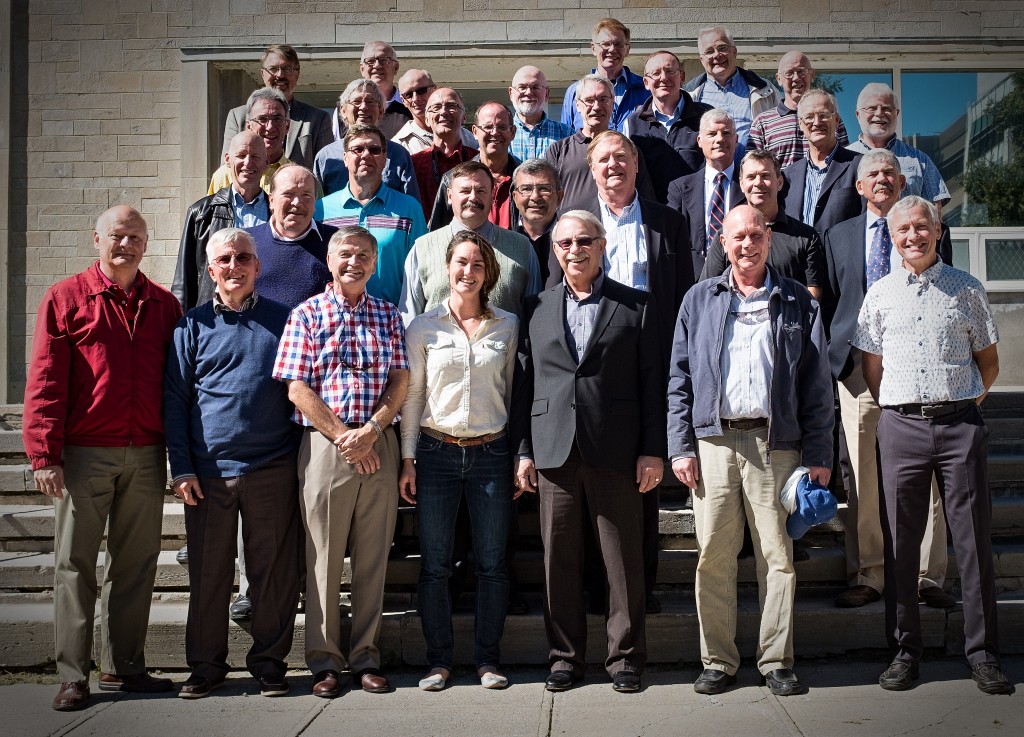 Class of ’75 were in impressed by the Wing on parade and later met to discuss future plans for support to the Innovation in Teaching and Learning Project as well as other projects. Group photos were taken by 26591 IV Rachel Anderson whom they added as an honorary class member in this, the final photo of their post-parade gathering. 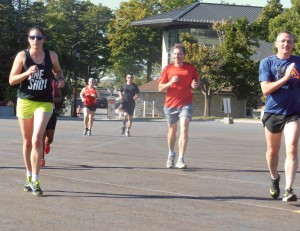 The fifth annual RMC run around Fort Henry on Ex-Cadet Weekend was a success, as 21 runners completed the near-five-km course on Saturday afternoon.

The weather was perfect, and everyone was smiling as they returned to the parade square, with the ex-cadets pleased they could still do the infamous Fort Henry hill.

The group consisted of 11 ex-cadets plus the members of the two present-day RMC cross-country teams.

The ex-cadet with the lowest number was 10208 Cameron Carbert of the Class of ‘75, who is on home leave from missionary work in west Africa. The highest number was 27070 O/Cdt Andrew Kerr. He is a third year cadet who has been at RMC throughout his time in the military college system, and is studying business.

Afterwards, everyone repaired to the Cadet Mess for a cool drink and a chance to compare notes on RMC over the years. It was a great way to celebrate the RMC experience.