The A.C. Leonard Award is given annually to the student group in 4th year judged by the faculty to have presented the best 4th year Mechanical Engineering Project. It honours Dr. A.C. Leonard, former Dean of Engineering, department head and professor of Mechanical Engineering at RMC. He also served in the RCAF in World War II (WWII), in the Canadian Army as an RCEME officer in Korea. Outstanding teacher, scholar and mentor, Dr. Leonard displayed a mastery of the orderly and logical communication of engineering knowledge, which the award is intended to recognize. This year’s award was presented by 3342 Dr. Craig Moffatt to the team of 25831 NCdt (IV) Lloyd Hicks and M0984 NCdt (IV) William Hynes for their work on the Preliminary Design of a Deep Water Arctic Submarine. 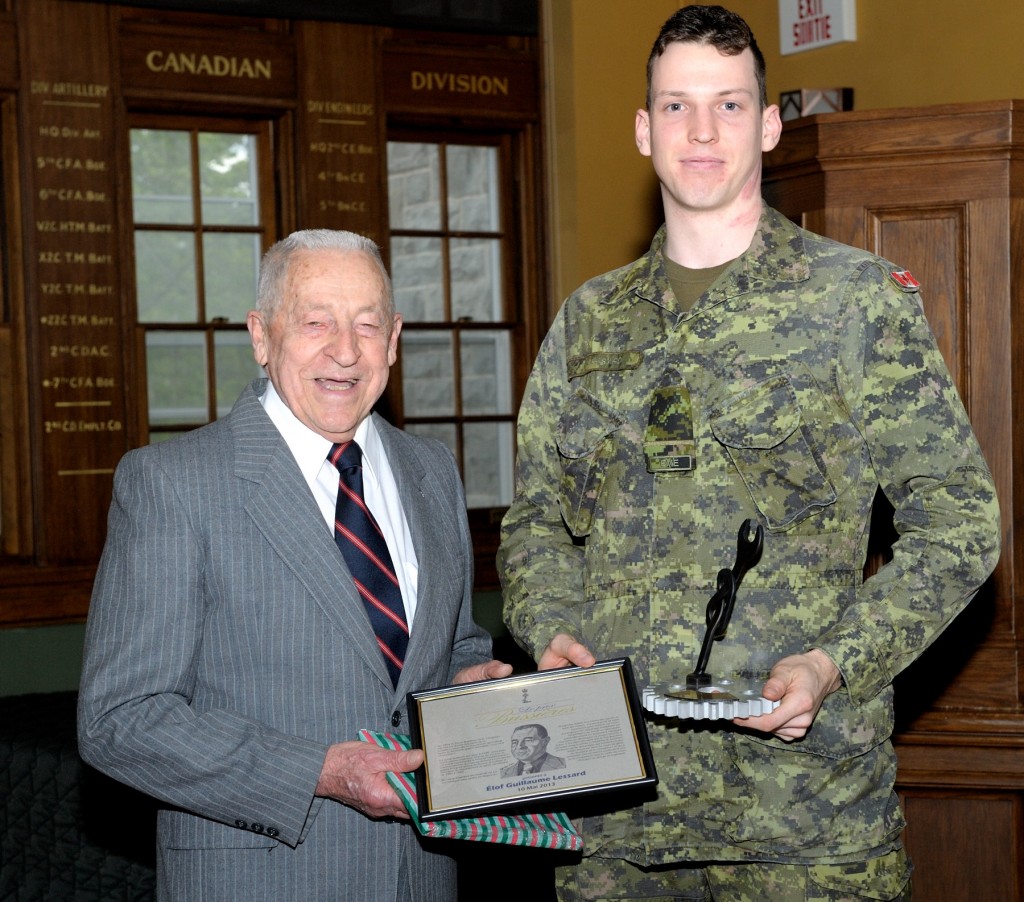 The Bussières Prize is awarded annually to the 3rd year student achieving the highest average in design-related engineering courses, and having demonstrated singular excellence in the 3rd year Mechanical Engineering Design Course competition.  2864 Dr. Bussières, was a member of the class known as the “The New One Hundred”, which re-opened RMC after WWII. He served fourteen years in the RCAF, mostly as a Flight Test Engineer, and retired as a Squadron Leader. Later he became a member of the RMC faculty, also serving ten years as Special Assistant to the Principal and three years as the Mechanical Engineering department head. He always tried to embed his experience with all stages of aircraft design into his teaching and mentoring of RMC cadets. Dr. Bussières presented this year’s prize to 25645 OCdt (III) Guillaume Lessard. 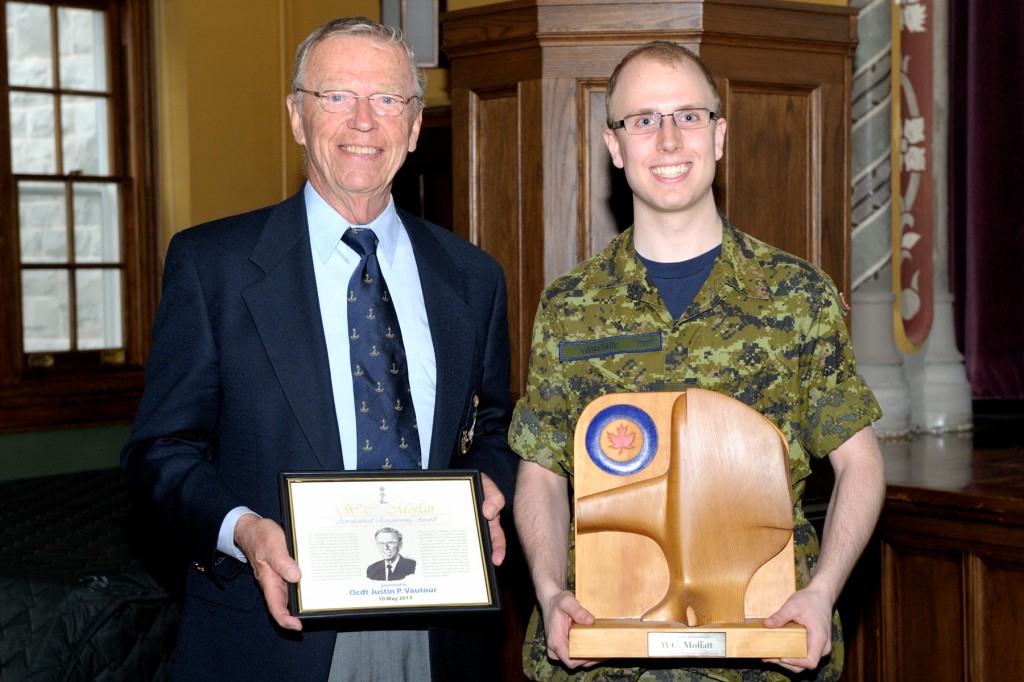 The W.C. Moffatt Award is given annually to the 4th year Aeronautical Engineering student who best demonstrates the qualities of a person driven to excellence by their own enthusiasm, intellectual curiosity and strong motivation to learn.  3342 Dr. Moffatt is an outstanding teacher, and former Department Head and later Dean of Engineering, who inspired his students to excellence for over 40 years at RMC. The winning student must also have contributed to a positive learning experience for his or her entire class through sound leadership in the classroom and laboratories. Dr. Moffatt presented this year’s award, which is selected by a secret ballot of all 4th year Aeronautical Engineering students to their most-deserving peer, to 25734 OCdt (IV) Justin Vautour. 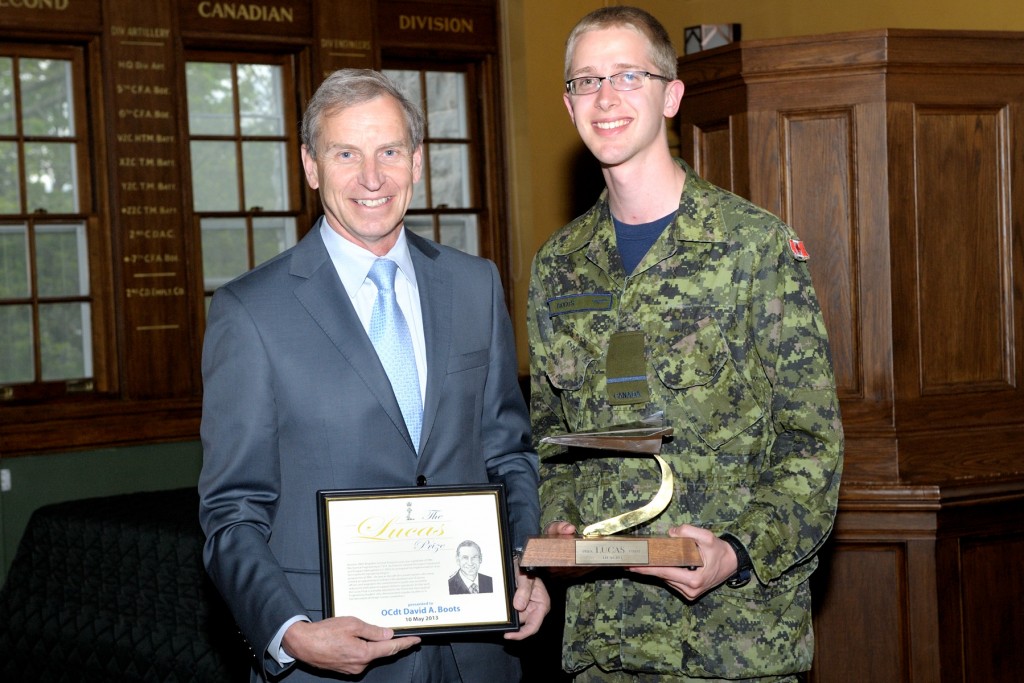 The Lucas Prize is presented annually to the 3rd year Aeronautical Engineering student who demonstrated singular excellence in the 3rd yr Aeronautical Design Course competition. 9805 Brigadier General (retired) Dwayne Lucas prompted the implementation of an Aeronautical Engineering Degree program at RMC when he was the Director General Aerospace Equipment Program Management in 2003. He is an Aircraft Structural Engineer who never misses the opportunity to enhance the development of young officers and engineers while also being dedicated to support Air Force operations. BGen (retired) Lucas presented this year’s prize to 26208 OCdt (III) David Boots.

Following the award presentations in Currie Hall, the 4th year Mech and Aero classes and the faculty gathered for the iconic class photo that would soon join the collection that lines the halls of the Mech/Aero Department for future generations to see. Afterwards, the staff and award winners had a chance to mingle and reflect upon the year at a reception at the RMC Senior Staff Mess. Congratulations to the award winners, and to the 4th years. May your knowledge and critical thinking skills developed during your Mechanical or Aeronautical Engineering programs aid you in the careers on which you are about to embark.