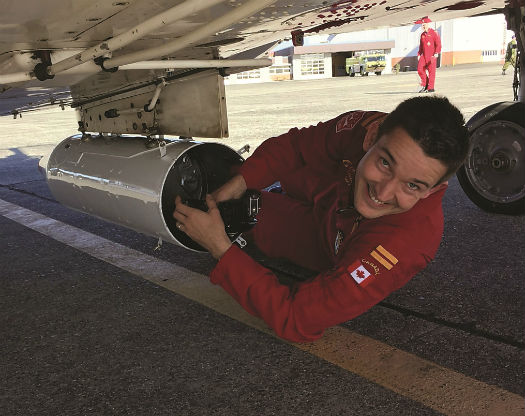 Pictures are powerful. No one knows that better than Capt Maciej “Match” Hatta, 33, who credits an airshow video with sparking his determination to be a pilot.

Hatta immigrated to Canada from Poland at the age of 2. Like many young boys, he initially wanted to be a police officer or a fireman—until his dad, a metalworker at McDonnell-Douglas Canada, brought home a company video that featured the 1990 Blue Angels jet team.

“I watched that, and then I watched it over and over, until my parents were sick of it!” remembered Hatta, who hails from Georgetown, Ont. He said the video flicked a switch in his head, and he began to think about an aviation career. At the age of 12, he joined the Royal Canadian Air Cadets’ 820 Milton Squadron—which was also where retired astronaut Chris Hadfield launched his aviation career.

Hatta earned his glider licence through Air Cadets in 1998, and his private pilot licence the following year. “After that, I never looked back,” he told Skies, noting that he joined the military right after completing high school in 2001. He went straight to Royal Military College that fall.

While there, Hatta’s plan to become a military aviator was nearly grounded. He applied for the pilot trade, but although he had passed a civilian cycloplegic eye refraction test, his results were borderline, and he failed to pass the equivalent military test. The procedure is used to determine if a person’s eyes are bending light correctly as it enters the lens.

“For the first three years at RMC, I fought (those test results) until luckily, there was a flight surgeon who said I was so borderline that they’d send me to the week-long aircrew selection,” he explained. “The medical portion was done first; I passed the eye testing there, and they sent me on. I had my heart set on what I wanted to do, so I kept pursuing it.”

In 2008, Hatta received his wings, moving on to fighter training at Cold Lake, Alta. He flew the CF-188 Hornet until 2013, when he joined 431 Air Demonstration Squadron as Snowbird 6, Outer Right Wing.

It was when he joined the Snowbirds that Hatta saw a way to marry two of his passions: flying and video production. “From the promotional side, we’re one of the more visible squadrons in the Air Force,” he remarked. “It’s a personal goal of mine to keep up that visibility.”

When he joined the demonstration team in the summer of 2013, the 101st Grey Cup was only a few months away. The Saskatchewan Roughriders were hosting the Hamilton Tiger-Cats in Regina. Hatta seized the opportunity to come up with a unique promotional video featuring Snowbirds pilots wearing flight helmets from both teams. It played on the stadium Jumbotron just as the team flew over the crowd.

Hatta has also been the driving force behind the Snowbirds TankCam, unveiled for the 2015 airshow season and coinciding with the 45th anniversary of the aerial demonstration team. Built upon a camera system dating back to the late 1980s, Hatta and team engineers installed modern GoPro cameras inside a hollowed-out smoke tank carried by Snowbird 1, the Team Lead.

The TankCam footage has been hugely popular, allowing fans to see the squadron in action like never before. The video has been a big hit with the team itself, too.

“I remember in Comox, the first week we had it, the guys sat around in the hotel and just watched TankCam footage,” laughed Hatta, who added that it has also proven to be a valuable training tool.

In 2014, Hatta created a total of 23 Snowbirds videos. With the introduction of the TankCam, he’d already made 21 by late August 2015. Most are featured on the Snowbirds Facebook page, and also on his non-profit “Match Productions” You-Tube channel. Each video is generally between two and three minutes in length. The elaborate 2014 Year in Review video required more than 100 hours of editing, while some of the simpler productions take only two hours.

In late June, Hatta came “full circle” when the Blue Angels flew with the Snowbirds in Indiana. Later, he also had the chance to ride in the back seat of Blue Angel 4. “I filmed that, of course. That’s probably been my most successful video to date, and people really loved it.”

While filming that flight, Hatta couldn’t help but remember the old Blue Angels video from his childhood. It had opened his eyes to a world of possibilities, and led him to Air Cadets. Today, he hopes his own work will inspire young people to consider an aviation career.

“I hope some kid somewhere is on Facebook or YouTube and comes across one of these videos, and the same thing happens. If someone can see that and think they want that view from their ‘office,’ then I will feel the extra labour is worth it.”

Hatta still has quite a few years left in the military, including one more year with the Snowbirds. After his service, he admits he’d love to tie his two passions together in a future career.

“If GoPro ever opened up an aviation video division, I’d be good with that!” he laughed.