This week for the Professional Military Training (PMT) period on 21 Jan 15 at the Royal Military College of Canada, the Cadet Wing was split into their respective years and had briefings from different staff: 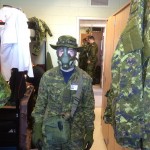 The first year Officer Cadets’ weekly PMT session consisted of a kit check to ensure that Cadets had the necessary kit for BMOQ (Basic Military Officer Qualifications) this summer. The check was completed on each squadron’s own lines and was monitored by the Div/Sqn NCOs. Cadets displayed all necessary kit items, and a list of missing/non-issued kit was made. The check occurred at this time because first years had just participated in a large kit issue last weekend, and had received Kevlar helmets, tactical vests, gas masks, rucksacks, sleeping bags, and much more. Members of Papa flight (First years of 5 Squadron) were happy to receive the new kit, as it serves as a reminder of the training they will be receiving at the end of the semester. Papa flight OCdts were quick to begin assembling their rucksacks, because they hope to start ruck marching in order to prepare themselves physically for BMOQ.

This week’s second year PMT was a briefing on leadership at the second year level. It was centered-around providing second years an opportunity to understand

how their roles within the college are going to change as they transition into third year. The expectations put on the class as a year will be different and thus roll will no longer be junior leaders or active followers. Throughout the presentation the points of Truth, Duty, Valour amongst others were stressed as it will be key for the class to lead by example. The briefing then figured key situations, which as a Section Commander, one could quite possibly will encounter that encouraged the class to view the predicament subjectively and effectively determine the correct course of action. The presentation was a key lesson on the road to becoming an effective leader. 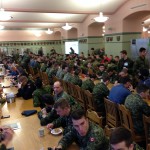 This morning the entire third year class sat through a presentation on Operation Orders and Decision Making given by the 9 squadron commander, Capt Lord. This presentation outlined the 8 steps of effective Op Orders and Planning. Planning and orders are both subject to Canadian Armed Forces wide standard; however the information was presented in a way that pertained to RMCC specifically. Many general tips were given such as keeping a journal with critical points, how to conduct a proper time estimate, as well as the importance of providing information and back briefs. Capt Lord also stressed the importance of a properly formulated Course of Action (COA) and suggested that the COAs presented must all be possible, ie. no throw-away COAs. The final point that was given was the importance of the plan as a whole which is the step where all the preparations come together in one place; typically this is presented in the form of Orders with annexes and other support documents. Once Capt. Lord had finished his presentation the DCdts, LCol Popov, stood up on a chair to address the third year class as a whole; he was able to provide the third years with real-life examples of when coordination and planning was crucial. He finished off by saying “amateurs talk tactics and professionals talk logistics” further stressing the importance of orders, planning, and coordination.

This week’s PMT included a briefing from Captain Shurdha, who extensively provided pertinent graduation information to the class of 2015. In his presentation, Captain Shurdha discussed the importance of having all requirements that an Officer Cadet needs in order to obtain his or her commission. These requirements included the Force test, an appropriate medical category, security clearance and of course, enough credits to obtain a Bachelor’s degree. In addition to discussing graduation prerequisites, Captain Shurdha provided useful insight into what challenges RMC cadets might face, either in their future respective training or when they are posted to their unit.

In the second hour of PMT, all 4th years had the pleasure of listening to Lt (N) Lee Pothier, who thoroughly discussed naval operations and the ongoing changes the Navy is currently undergoing. Not only did he elaborate on the future of various naval ships, but he also discussed career paths for various naval trades such as MARS, Marine Systems Engineer and Naval Logistics. In addition, he emphasized the importance of the Navy during operations and how many international and domestic operations involve complete integration of trades across all elements of the C.F. During the presentation, Lt (N) Pothier also played two educational and intriguing videos. One displayed Vice-Admiral Mark Norman, Commander Royal Canadian Navy speaking about the challenges the Navy is facing, while the other documented Canada’s contribution to operation RIMPAC in 2014. Overall, this week’s PMT was very informative and has taken the class of 2015 one step closer to being well informed and trained officers.

Members of the hockey team were asked to invite one faculty member that has made an impact on them during their studies at RMCC. The list of honorees is as follows: 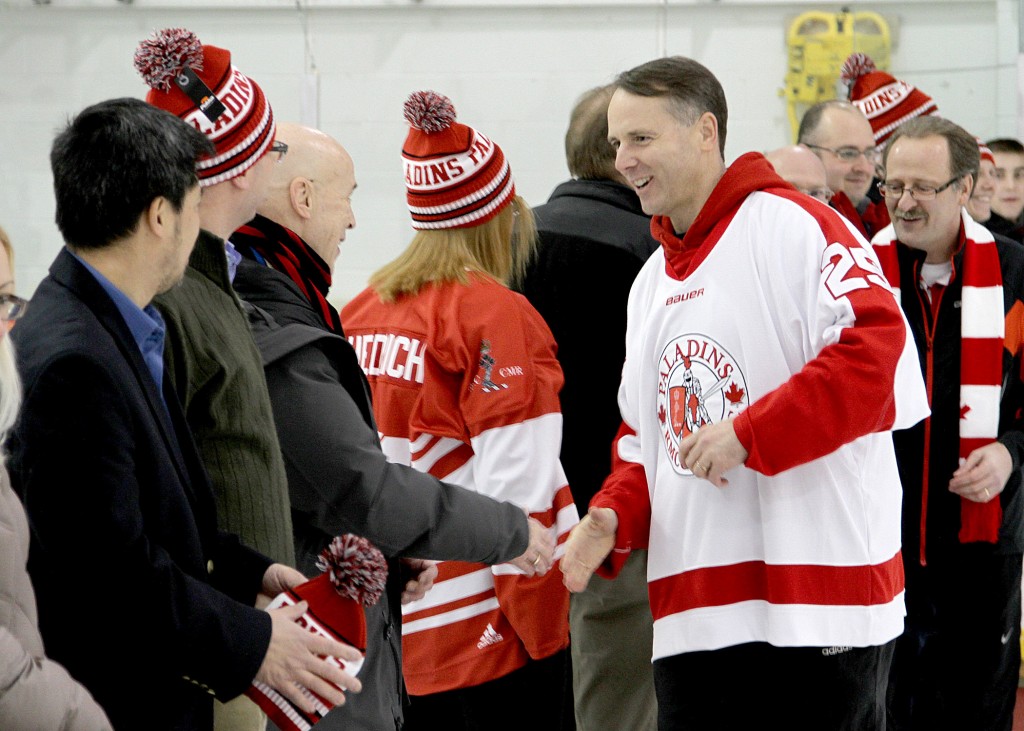 Commandant, BGen Al Meinzinger and RMCC principal, Dr. Harry Kowal, as well as several other faculty members, family and friends were in attendance to take part in the event. Although the game did not end in a victory for RMC, as the Paladins lost by a score of 4-2, the Faculty Appreciation Night proved to once again be a great success for all involved!

On Monday, 19 Jan 15, the Peer Assistance Group (PAG) at the Royal Military College of Canada hosted a workshop titled, “Body Image, Eating Disorders, and Steroid Use: How to Help,” and invited the Cadet Wing to attend. This workshop was conducted by two master’s degree students from Queen’s University, Amanda Shamblaw and Pauline Leung, who have experience in the field and are currently studying in related matters.

During the workshop, the Officer Cadets were first explained the different types of common illnesses that are associated with body image: anorexia, bulimia, binge eating disorder, anabolic steroid use, and muscle dysmorphia. The best way to help someone who is going through such an illness is to be knowledgeable and understand what the person is going through. Is it not uncommon for people to believe that these illnesses are only a matter of will-power. On the flipside, this analogy was given: “Imagine your favourite food. Now imagine your worst fear. Now imagine eating your favourite food in a room full of spiders. That is how these people feel.”

As PAG members, we are called to be there for people and listen to them if they need someone to talk to, and trained to be able to do so wisely. As shared by some members of the audience, illnesses related to body image absolutely do occur, and it is our job to inform ourselves so that we are able to walk alongside these people. A few strategies were given to help us be able to speak with these people and help them. The first thing is just realising that we need to change the way we talk, as we do not know whether anyone around us who can hear us is going through this and whether what we say can affect them. We have to be patient and compassionate, as contrary to the stigma, this is not by their own choice. We need to be knowledgeable and non-judgemental, so that they do not feel shamed by it. Lastly, we have to realise that any chance or desire to seek professional help really comes internally, not by blame and guilt.

This workshop was really helpful and helped many of our Officer Cadets, whether PAG or not, to be more informed about the topic and to be able to give guidance to those who we know, now and in the future, to be able to hopefully overcome their illnesses. As future leaders of the Canadian Armed Forces, it is our duty to be able to help our troops to be fit and ready for duty.