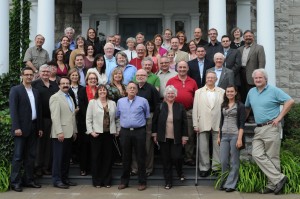 For more information on the CFWWIRF please go to www.internmentcanada.ca (the Kingston Symposium

On 17-20 June 2010 the Canadian First World War Internment Recognition Fund’s Endowment Council sponsored a weekend-long symposium in Kingston, Ontario at Queen’s University , bringing together some 50 community activists, scholars, archivists, museum curators, internee descendants and artists to develop initiatives that will commemorate and educate all Canadians about what happened during Canada’s first national internment operations of 1914-1920. It was only fitting that the symposium was held in “the Limestone City” where in 1978, the Ukrainian Canadian community’s campaign for acknowledgement and redress began with an interview between former internee Nykola Sakaliuk and Dr. Lubomyr Luciuk, then a geography student at Queens University. The symposium schedule, facilitated by Gail Lord, revolved around four major themes – A Crippling Legacy – The Affected Communities,” moderated by Paul Grod, president, Ukrainian Canadian Congress; Repositories of Memory – The Curators, Custodians and Collectors,” with comments by Mark O’Neill, chief executive officer of the Canadian War Museum; “Recovering Memory: Educating the Educators,” guided by Dr. Ruth Sandwell of the Ontario Institute of Education and “Reshaping Canada’s Cultural Landscapes – The Creators” with Marsha Skrypuch, author and internee descendant. The keynote address was by Professor Roger Daniels, professor emeritus, University of Cincinnati, USA, “Bringing Governments to Justice.”

The weekend long symposium ended with a memorial service at Fort Henry, Canada’s first permanent internment camp, hosted by this UNESCO World Heritage site museum curator, Ron Ridley. Wreaths were laid by Orest Kruhlak, chair of the Endowment Council and Andrew Hladyshevsky, president of The Shevchenko Foundation, and by diplomats representing a number of the homeland countries namely Dr. Ihor Ostash, Ambassador of Ukraine to Canada, Ms Vesela Mrden Korac, Ambassador of Croatia to Canada, Tamas Kiraly, deputy head of Mission for the Embassy of the Republic of Hungary. Ms Diane Dragasevich represented the Serbian Canadian community. An ecumenical prayer was given by the Reverend Dr Stanford Lucyk following comments by the Honourable Peter Milliken, Speaker of the House of Commons. The Ukrainian song, “Eternal Memory” concluded the event.

The symposium’s local organizer, RMC geography professor Dr Lubomyr Luciuk, said: ” This meeting represents the culmination of many years of effort on the part of many of those attending it. We hope the Kingston Symposium will lay the groundwork for helping the Endowment Council ensure that what happened to Ukrainians and other Europeans during this country’s first national internment operations becomes part of the educational curricula of every province and is recalled through film, artwork and historical markers across Canada. Our fellow citizens need to become better aware of what the internees suffered – not because of anything they had done, but only because of who they were, where they came from. This violation of the civil liberties and human rights of thousands of innocents remains an historical episode in Canadian history that is scarce known. We are beginning the process of recovering this historical memory to help ensure that, in future periods of domestic or international crisis, no other ethnic, religious or racial minorities in Canada suffer needlessly as these “enemy aliens” of the First World War period did.” Dr. Christian Leuprecht, a political demographer at the Royal Military College of Canada since 2009, is particularly interested in the political, cultural, social, economic and security implications of population change and migration. His current major project concerns political mobilization and radicalization leading to violent extremism, especially among youth and minority communities, with a focus on examining the individual, collective, and structural determinants of resilience among at-risk communities.

Dr. Leuprecht is also doing work on comparative civil-military relations and military sociology with a particular interest in the relationship between the security sector and demographic as well as value changes in democratic societies insofar as these affect recruitment, retention, military affairs, transformation, and reform. In this regard, he is particularly interested in the relationship between the provision of security and democratic governance of deeply diverse societies. He continues to write on German politics, especially federalism reform. He is building the Canadian Critical Incidents Database which will detail a wealth of data on terrorism-related events in Canada from the 1970s until today (with Todd Hataley). He is leading a meta-analysis scanning the literature on terrorism for propositions, evidence, and quality of the evidence for coding in QSR/NVivo. He is the co-investigator of a project on the connection between radicalization and diaspora material support of extremism and violence (with Todd Hataley). He is initiating a major five-year research project on security in federal countries (with Todd Hataley). He is a collaborator in an investigation on harnessing intellectual capacity across the security sector that involves a variety of researchers from Defence Research and Development Canada.