A ‘HISTORICAL’ TOUR OF RMC WITH DR. JOHN COWAN 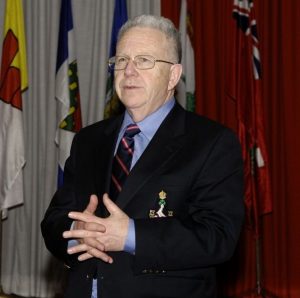 On Friday, August 24, 2009, H 24263 Dr. John Cowan, former principal of RMC, graciously provided the RMC Green Team with a historical tour of RMC. The tour presented the members of the RMC Green Team with insight and understanding about the important role RMC has played in the history not only of the Canadian Forces but for Canada as well. Working within the grounds of RMC, it is imperative that we are all acquainted with the role that this institution has played, and continues to play, in our national history, and why we should appreciate and value its contributions to our freedom. Our day-to-day activities are integrated with structures and memorabilia from the past, one which has been pivotal in shaping the Canada we all know and love today.

The RMC Green Team is an environmental group at RMC, marrying the environmental needs of the Department of National Defence with the subject matter experts that reside at RMC. The Green Team was created by Dr. Nicholas Vlachopoulos (19930), a professor within the Civil Engineering Department at RMC. Ms. Tina Basso organized the tour on behalf of the team as a professional development exercise. The tour provided a greater understanding about our country’s past, and we have all developed a new found respect for the institution in which we work. This will definitely reflect the way in which we conduct ourselves while on campus. It was greatly appreciated by all team members.

Dr. Cowan was extremely knowledgeable, not only about the history of RMC, but also about the history of our great nation. Dr. Cowan provided us with many unfamiliar Canadian facts, such as the contribution of RMC in the design of our national flag, historical battles, the Old Eighteen, and information as varied and enigmatic, about many others who have walked the hallways of RMC. One of the highlights of the tour was Currie Hall, a beautifully illustrated chronicle of the products of RMC’s decadent past. The tour began at the Senior Staff Mess, and continued through to the Mackenzie Building, the Currie Building, and ended at the RMC Museum.

We are all extremely grateful for the time and wisdom Dr. Cowan was able to impart on us, and we highly recommend contacting Dr. Cowan for your own personalized tour. TDV.

Dr. John Cowan currently is President of the Conference of Defence Associations Institute (CDAI), and is the Vice-Chair of the Defence Science Advisory Board of Canada (DSAB). In 2008 he was awarded the Canadian Forces Medallion for Distinguished Service. His current RMC status is Principal Emeritus, and in May 2009 he received a Doctor of Military Science (honoris causa) from RMC. He is currently Honorary LCol of the Princess of Wales Own Regiment. Dr. Alan Whitehorn has been teaching at RMC since 1978 and is currently a professor in the Political Science Department, as well as a being cross-appointed at Queen’s University. His latest book, Just Poems: Reflections on the Armenian Genocide, is a continuation of his growing interest in the field of Genocide Studies. As his grandmother was the family’s sole survivor of this troubled period in WWI, he has a particular interest in seeking out recognition, reconciliation, forgiveness, and a world without genocide. He is an international lecturer  in this field and assists Ontario School Boards in ‘teaching’ their educators how to approach this topic in their ethnically diverse classrooms. Part of what he loves about teaching at RMC is that he will not see the full effect of his lectures until his students are commissioned officers and having to deal with these sorts of problems in the field. He sees his role as planting the seeds within the cadets through education, and shedding light into the darker side of the human experience that permits and forgets such events, thereby aiding his students when the have to carry out Canadian objectives in troubled lands. This book is part of his self-imposed mandate of education in the broadest sense, which is to teach students, Canadian society, and the world at large about our obligations to make it a safer, more just world for future generations. He has chosen poetry as a means to reach individuals at another level, at a place where facts alone cannot touch. His poetry was cited in the senate debates that led to the 2004 passing of Bill M-380, which recognized the Armenian genocide of 1915.  In his view, “if we can acknowledge yesterday’s mistreatment, then we can acknowledge today’s as well.” Below is a poem from his book.
by M0917 Dean Fleet 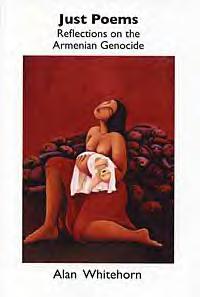 I have a terrible choice.
My government has taken dramatic notice of my writings.
It reminds me of international complications.
Should I continue to speak out, as I do?
An irate foreign government
now counts me amongst its enemies
and has made veiled threats.
I could even be killed by one of its nationalist compatriots,
ever so eager to please and show misguided loyalty
to such a nationalistic and repressive regime.
I continue to agonize about the restrictions
about what I can say
regarding a foreign government’s campaign of genocide denial.
Meanwhile,
I hear the rustling leaves of the trees at Tsitsernakaberd.
They remind me that the genocide victims’ souls are still restless

Dr. Jane Boulden, who holds a Canada Research Chair in international relations and security studies at the Royal Military College of Canada, coauthored ‘The United Nations and Nuclear Orders‘ which was published by United Nations University Press in August 2009.

“Recent tensions surrounding the nuclear ambitions of North Korea and Iran, as well as the shocking revelations of A.Q. Khan’s atomic bazaar, have drawn attention to the role of the United Nations in addressing a host of nuclear challenges. Yet the world organization’s role has largely been absent from both scholarly and policy research. The United Nations and Nuclear Orders fills this void by shedding light on the past, present and future roles of the UN in responding to the threats and challenges posed by nuclear weapons.”