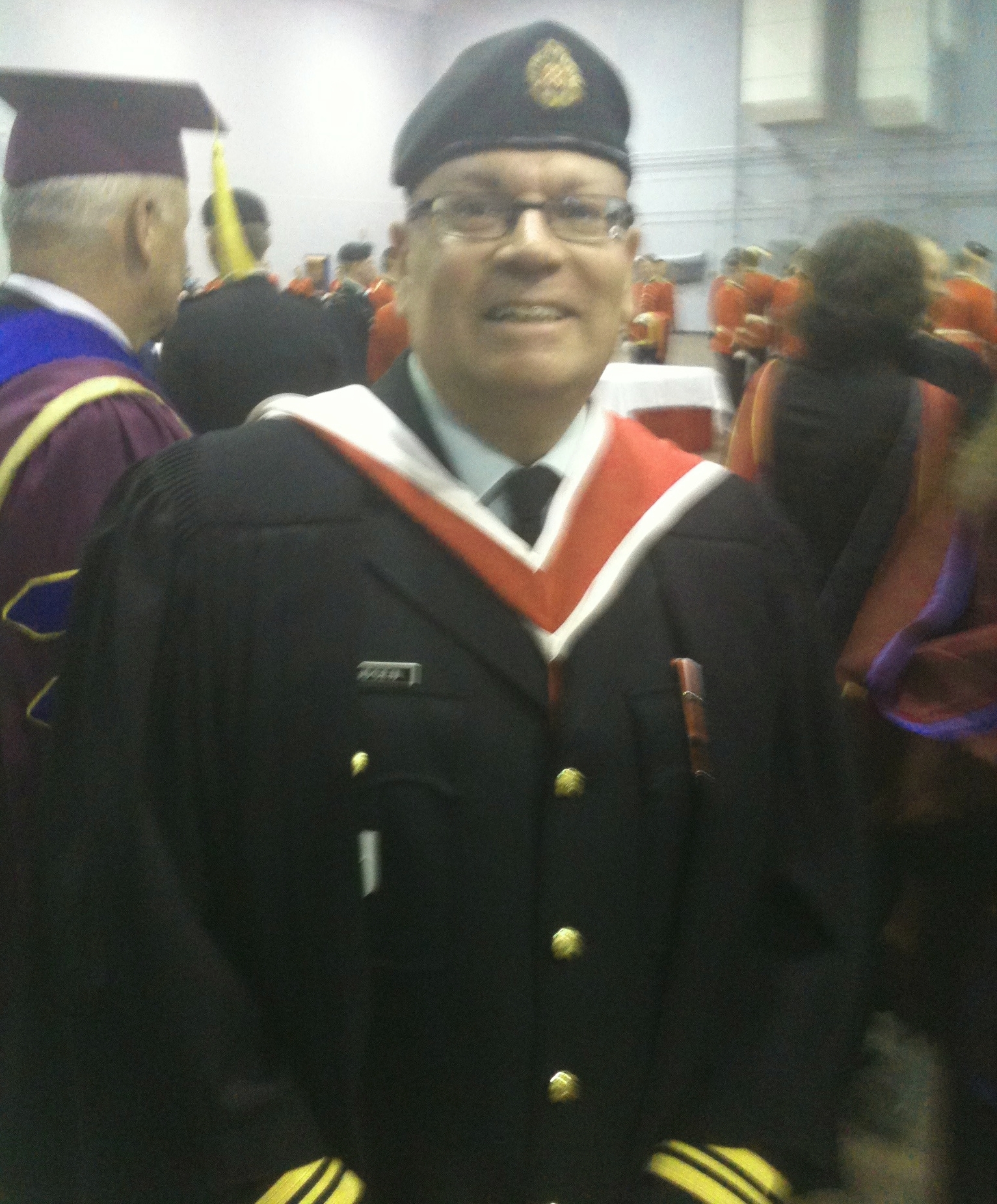 The Royal Military College of Canada enjoys a uniqueness not found in other universities: military officer professors. Major Bertram Frandsen has been with the college since 2009 and is highly involved with the history department. He brings an exceptionally excitable teaching style to the institute and has been a welcomed member of the teaching staff. However, he is announcing his retirement from the college and the Canadian Forces beginning September 2012. During his stay at the college, Frandsen has undergone experiences that students and much of the faculty may not know of.

Frandsen began his career with the Canadian Forces in 1976 through the Reserve Officer Entry Program with the intent of becoming an infantry officer. His desires changed a couple years later, and he pursued the logistical branch. After his first posting in Petawawa, he was transferred to Germany to serve as quarter master of 1 RCHA artillery regiment. He returned to Canada in 1986 and worked in the brigade headquarters of Petawawa. He was given his rank of Major in 1987 when he began his first of four postings in the National Defence Headquarters. He held numerous positions before his penultimate position as a strategic Analyst at NDHQ. In 2009, he was posted to the Royal Military College of Canada.

Even before his arrival at the college, Frandsen had a desire to teach at RMC, as he notes, “I was certainly keen on coming to the college, and I consider it an honour and a privilege. I am actually retiring in September after 37 years, and I cannot think of a better spot to retire than here; I am very fortunate that this will be my final posting in the Canadian Forces.”

Since 2009, Frandsen has been teaching the college’s History Department. His courses focus on Canadian history, Canadian military history, and the impact of science and technology on society and the environment. To his surprise, a majority of his students are non-artsmen; he has been trusted with the core courses required of all Engineering and Science students.

“I was looking at the very large graduating class, and I did a quick count: Well over one hundred of the engineers graduating were students of mine over the past few years,” he explains with a hint of pride, “It isn’t your typical University. There is a completely different rationale at RMC; while history is part of the education program, it is also part of the wider sense of developing professionalism for potential future officer of the Canadian Forces.”

History has always been a passion for Frandsen. It began in his youth when he would go to the library and read books on various types of history. It continued as he aged, and it became his best subject in high school. Despite this, he took political science in 1972 at Glennin College “albeit with history overtones” – he claims to defend his love for the subject. He worried that he may not have been given the chance to further his education in his following years in the Canadian Forces, but he was pleasantly surprised when given the chance to complete the MA and War Studies program in Toronto. He began his PhD in history at Wilfred Laurier in 2003 and expects to be finished in January 2013. Teaching military history at RMC has been a delight for him not only for this reason, but also because of the rich military history of his own family – his grandfathers have fought in the Seven Years War and the War of 1812, and his father is a WWII naval veteran.

The enjoyment of Frandsen’s lifelong-desired position was unexpectedly interrupted just before the Convocation Day of 2010 when he awoke aching with full-body pain and was incapable of walking by the end of the day. He had become a paraplegic. Frandsen was hospitalized for four months – after which he would have to relearn how to walk. He spent an entire year off on sick leave where he regained his previous abilities and experienced a different quality of life. He notes the way that people registered him during his time disabled and hopes to one day write of the experience. Despite the hardship, he returned in the fall of 2011 in full capacity to recommence his teaching.

“It was a great challenge – just as much psychologically and mentally as it was physically,” he says and furthers his experience to the cadets, “Having taught and seen the cadets in my office, I see the hardship that they sometimes go through. I advise them that even though we become caught in our day-to-day situations, there will almost always be a light at the end of the tunnel.

“When I look back at my time teaching at RMC, one of the things that I always try to imbue – which some students on occasion find bizarre – is that regardless of what you decide to do with your life, regardless of your current situation, you need to also be able to write and read critically, and that is why I might have been rough at times when it came to grading students’ papers. I know you can do better, and sometimes it is a matter of giving you that little ‘push’ to help you over the top.”

As the summer months continue, Major Bertram Frandsen approaches his perpetual retirement in September due to the Canadian Force’s compulsory retirement age. After being in the Canadian Forces for 37 years, he knows that life will be quite different. He will be receiving his dissertation by January and desires to continue teaching part time.

On the subject, Frandsen jests, “I may be nearing 60, but I’m still alive; I’m not quite over the hill yet!”