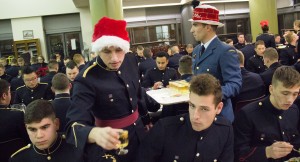 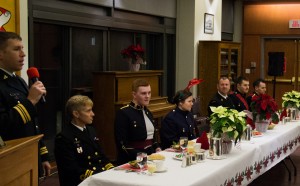 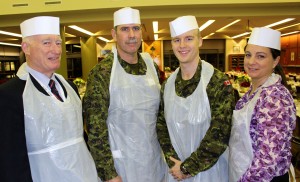 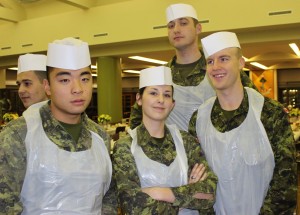 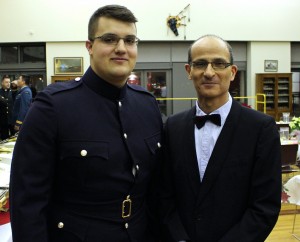 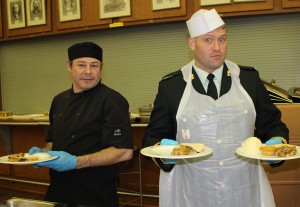 The RMCC dinners are a “spin-off” from a long-standing custom peculiar to the Canadian Armed Forces. For as long as most of us can remember, it has been a tradition, around Christmas to have a special “all ranks” dinner.  The main theme is the reversal of roles between the Officers and those in lower rank.

The most popular part of the custom is that regular protocol is relaxed. In the spirit of good cheer, the youngest member of the base, unit, or ship trades places with the most senior rank (Base Commander, Commanding Officer, Commandant, etc) by exchanging tunics and assuming the honour as Commander of the day.

The four evening meals began with the traditional piping in of the dignitaries – a meal of turkey with all the trimmings. From there each one of the Divisions put their own twist to this annual fun occasion. 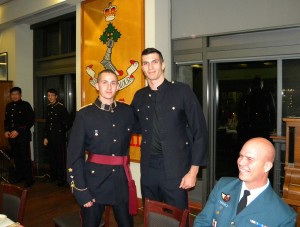 Annual Traditional Dinner with “A” Division

It was only to be expected that the cheeriest Division Dinner would occur on the final day of term. Freshly released from classes, 1, 2 and 3 Squadron filed into the Formal Mess in Yeo Hall to pay their respects to a few annual traditions.

It’s custom that during the annual Christmas Dinner at individual units across Canada, the youngest member and the Commanding Officer trade tunics (and roles, though how far they were allowed to take that would vary from CO to CO). A Division decided to shake it up a little this year, keeping the traditional exchange wholly within the Cadet Chain of Authority; the youngest first year traded his 4’s tunic with the Cadet Division Leader, and the oldest Cadet (also from first year) traded his with the Cadet Division Training Officer. The reason for the latter was a new spin on an old formality; recognizing the link between the experience that guides a unit, typically found in the warrant assisting his commander, and the new blood.

It’s another tradition for the youngest member to ask for three wishes to be granted to him and his fellow members. This, perhaps, was the most anticipated moment of the dinner, as all the years had a stake in the first year’s request. The result was the following: an evening snack to be provided by the mess during exams, fourth year standard on rooms (met with cheers and relieved faces), and combat fatigues for the exam period.

The dinner wrapped up with many thanks to the kitchen staff, senior Cadets and the officers presiding, among a flurry of paper aeroplanes. Well, you can’t expect formality all the time.