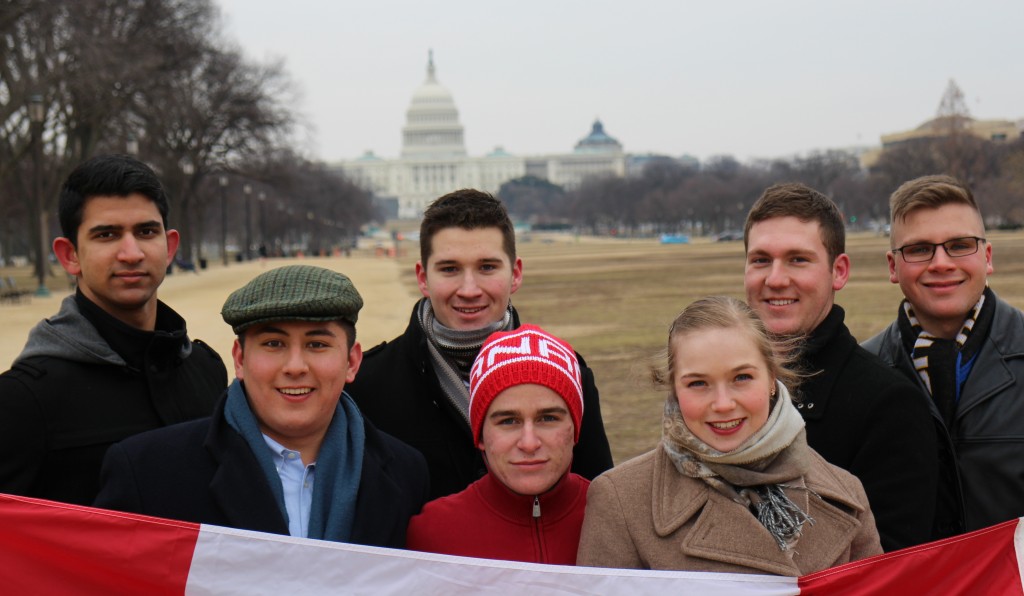 It was around 4:45am on the 12th of February when the RMCC Model NATO team packed into two taxis headed for the airport. Months of practice and preparation had brought together a team consisting of seasoned veterans and newcomers alike to represent the foreign and national policy of the United Kingdom. The team has consistently demonstrated the leadership and professionalism of the college for several years now through intense preparation that has included policy studies, practice scenarios, lobbying, and political strategy.

Day 1 allowed the team to familiarize themselves with the beautiful city of Washington DC. Sightseeing around “the Mall” included visits to the Whitehouse, Lincoln Memorial, and the Smithsonian Natural History Museum. The rest of the day was spent catching up on school work, brushing up on policy and committee procedure, as well as some pre-conference networking with fellow delegates who continued to arrive from across North America throughout the day. That night’s snowstorm, however, would have an adverse effect on the following day’s activities.

Several inches of snow in DC had a much more significant effect on the city than it might have had anywhere else in Canada. Many government and civilian offices, as well as commercial locations were shut down for the day except one under-staffed Subway restaurant several blocks from the hotel. Many embassy briefings were cancelled due to staff being snowed in. The weather even affected the attendance of many delegations, including the host school, Converse College but the conference moved ahead at the helm of Northeastern University. RMC once again made its appearance in scarlets for opening ceremonies and the remainder of the day consisted of professional networking with fellow delegates in preparation for the coming committee sessions that would rely heavily on personal and professional cooperation with over 20 different delegations.

Valentine’s Day was largely ignored by delegates as committee sessions began at 9am and ran until 5pm, inciting political debate on topics ranging from post-2014 Afghanistan operations to new member integration in NATO. While there were certain policies and solutions agreed upon unanimously, other issues stirred controversy between delegations. This is when committee leadership emerged, especially from our RMC delegates as they steered debate towards a cohesive solution agreed upon by the majority of the committee. The evenings consisted of tactical social activities ranging from coffee with specific delegates to dinner with entire delegations, all with the objective of forging stronger personal and professional relationships that would aid in the following committee sessions.

In the final day of regular committee session, delegates were beginning to feel the effects of 20-hour days but coffee and proper motivation kept the RMC delegation on the diplomatic front lines. By the end of the day, delegates were able to kick their feet up and enjoy a well deserved break after 2 days of heated political discourse and drafting communiqués. The delegates of the North Atlantic Committee, however, were not so lucky since the following morning prior to closing ceremonies would contain one last committee session where all the work from other committees would be debated, erased or adopted. The focus shifted from multiple committees and delegates to delegations and their NAC representatives. As per tradition, RMC entered the committee session in scarlets and would remain in them until after the awards ceremony. None of this would have been possible without the generous support of the RMC Foundation. Their belief in the programme for excellence at RMCC is what has allowed the Model NATO team of 2014 to gain invaluable experience in public speaking, team work, debate and diplomacy, all qualities that enhance our development as future officers in the Canadian Forces.