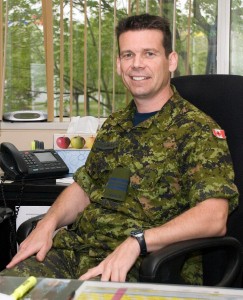 E2531 Maj. Michel Archambault (RMC 2002) has been the Director of the Officer-Cadets at the Military Division of the Royal Military College Saint-Jean since June 2009. He has served most recently as Deputy Commandant at the Canadian Forces Leadership Recruit School (CFLRS) in Saint-Jean, which is the Canadian Forces centre of excellence responsible for beginning the transformation from officer-cadets and recruits into warrior leaders. He had served previously as the OC of Recruit Division at CFLRS leading the training of 1300 recruits and 200+ military personnel on any given day. After having been selected for the Air Force Degree Completion Program, he graduated with distinction from Royal Military College with a Bachelor of Military Arts and Sciences in 2002. He and his wife have two children, 18 and 15 years old sons. Their eldest hopes to transfer to Royal Military Colleges and play on the Paladins hockey team after he completes CEGEP 2 in the program of Sciences at the CEGEP of St-Jean-sur-Richelieu, Qc.

Maj. Archambault: Prior to 2009, the officer course was completed in two phases: Phase 1 being the Initial Assessment Period (IAP) and Phase 2 being the Basic Officer Training Program (BOTP). The two phases were combined because for the last two years, almost all IAP-BOTP courses were given back to back. This resulted in an unnecessary repetition of curriculum and further exacerbated the staff tempo at the school. Input from the instructors of Leadership Division was given careful consideration in the development of the new course schedule and not only did the course’s structure change, but content was updated as well. Since the new year, the course has been revamped and renamed. Starting the summer 2009, RMC and RMC Saint-Jean officer cadets now complete their Basic Military Officer Qualification (BMOQ) in an 11 week course over one summer rather than 2 periods (IAP and BOTP) over two summers for a total of 15 weeks. Since our cadets complete the orientation program from Aug 2-23rd before they start their first academic year at RMCSJ, this orientation program plus the military training received throughout their first academic year provide them with the difference of four weeks credit towards their BMOQ. The direct entry officers and Civilian University students still complete a 15 week course. The academic semester at RMC Saint Jean started August 24, 2009.

Maj. Archambault: The name of the newly designed course is Basic Military Officer Qualification (BMOQ) and implementation began 5 January 2009. The 15-week Basic Military Officer Qualification (BMOQ) course is now one complete phase. The curriculum has been improved to maximize the candidate’s learning experience and further develop their leadership abilities. The focus is now on the practice of battle procedure via tactical exercises without troops (TEWT). The BMOQ incorporates a Perfect Demo by the Leadership Staff demonstrating what is required and expected of the candidates during the redesigned EX VIMY (final evaluation of the officer-cadets). This exercise is now directly linked to the final exercise and mentors candidates progressively in order to achieve success. The first BMOQ course graduated on 17 April 2009. During the busy summer schedule, Leadership Division delivered an effective program producing officers of the Canadian Forces that will be well versed in the qualities and values expected of them upon graduation from CFLRS and to be exercised throughout their military career.

Maj. Archambault: CFLRS continuously improves the training. We are continuously in communication with environmental training schools to keep the latest in the field and operations so that the training remains up-to-date. For example, Improvised Explosive Devices (IED) are homemade bombs constructed and deployed in terrorist actions or in unconventional warfare by guerrillas or commando forces in ways other than in conventional military action. With the completion of the officer courses comes the time to look back at how the training was conducted and proceed with what we call an After Action Review (AAR) to continually improve the training. The staff of Leadership Division in conjunction with the Standards Division have continued to work together to implement and evaluate the redesigned BMOQ course content. We re-evaluate the course curriculum to determine what needs to be added or removed and what needs to be revised.

eVeritas: What was the biggest change at the Canadian Forces Leadership Recruit School (CFLRS) in Saint-Jean in recent years?

Maj. Archambault: One of the biggest changes is the realism of the mission rehearsal exercises and live, virtual and constructive battle command training simulations. CFLRS is constantly updating those simulations from lessons learned in Iraq , Afghanistan and other conflicts to meet the needs of a changing force amid changing warfare. The exercises are conducted in austere conditions using hundreds of actors, both Regular Force and Reservists and civilians.

eVeritas: During orientation at Royal Military College Saint Jean, you taught some classes.

Maj. Archambault: Yes. The three week orientation was held in August 2009 at the Royal Military College Saint-Jean. This year, orientation was open to Regular Officer Training Plan (ROTP) officer cadets who are enrolled in the Canadian Forces (Regular) and receive full subsidization at either, the Royal Military College of Canada (RMCC), RMCSJ or, an approved Canadian civilian university. In the past, officer cadets at civilian universities did not attend orientation. Under the ROTP program, officer cadets receive a salary, free tuition and mandatory books and upon graduation serve a period of obligatory service as a commissioned officer in the Regular Force.

eVeritas: Describe your role as Director of the Officer-Cadets at the Military Division of the Royal Military College Saint-Jean?

Maj. Archambault: I am responsible for performance, supervision, discipline, assessment, evaluation, and welfare of the cadets at RMC Saint-Jean. I am also responsible for the conduct of three of the four components at the College: military-leadership, athletic and bilingualism competencies. These competencies allow officer cadets to acquire the leadership skills needed to succeed as an Officer in the Canadian Forces. I also assist the academic division to meet their objectives for pre-university academic studies. My responsibility is to inculcate the military ethos to the cadets that is to provide military orientation, training, and supervision. To this end, I have a Wednesday morning parades during which I gather the Wing, pass on points of interest, offer congratulations, highlight the performance of rep teams, outline upcoming events such as the Army run, motivate the Ocdts and staff and open the floor for questions.

Maj. Archambault:Participation in team sports is compulsory at the Officer Cadets Division. The physical training programme emphasizes physical fitness, elementary knowledge in a variety of sports, and sports administration. The Officer Cadets must choose between intra mural or varsity level sports. They play many sports such as flag football, soccer, volleyball and ultimate Frisbee at the intra mural level. At the varsity level, the squadron offers Tae Kwon Do, hockey, soccer, cross country running, broomball and fencing for those with the right skills and aptitudes. Those who will want to practice specific sports not offered at the squadron may submit a request (in writing) to do so on their own time. RMC Saint-Jean expects to add more sports such as a team for Sand Hurst (military skills) competition. We are also lining up coaches for hockey and triathlon. I see the College is all about training to succeed and to develop leaders, as opposed to merely training to meet standards. I like to see cadets overshooting or surpassing their objectives, so that they still meet the standards on a bad day.

eVeritas: How do you feel about skylarks (pranks) at the Royal Military College Saint-Jean?

Maj. Archambault: Although I have enjoyed participating in some good skylarks in the Air Force, my preference as DCadets would be to keep a tight lid on skylarks, at least until the officer cadets understand the limits. It is important that the skylarks should demonstrate respect and dignity and not be demeaning or damage property. They should improve morale, be creative and show leadership. I would like to think that the officer cadets are not in a prank mode (yet). In my experience, skylarks develop leadership and followership. It is not an easy climb, and it can be lonely at the top. Leadership is not about being popular; leaders must make tough decisions and ensure that they do no leave their followers behind.

eVeritas: What do you look for in officer cadets who join Royal Military College Saint-Jean?

Maj. Archambault: In my experience officers who thrive in the Canadian Forces possess a winning attitude; work-life balance; teamwork; and the willingness to lead and/or to follow at all levels of the organization. Personally, I like to wake up with an objective and to go to sleep with a feeling of accomplishment. Time management, discipline and prioritization are the keys to achieving a balance between professional, family life, social life. Officer Cadets who join Royal Military College Saint-Jean must possess strong academic ability, an open mind, and a lot of determination. They must rapidly learn to manage their time and develop good work habits, in order to excel in all four components of the programme. At the same time, they are presented with a wide variety of interesting and enjoyable opportunities and activities. Excellent training, interesting challenges, and rewarding, unique experiences await the future officer cadet.

eVeritas:: How do you feel about change at RMC Saint-Jean?

Maj. Archambault: The College Militaire Royal closed in 1995 and reopened as the Royal Military College Saint-Jean in 2008. Since this is the second year since the College was reopened the Pareto rule is in effect. The first 80% of the work to reopen the College has been done in 20% of the time. The next 20% of the work will take 80% of the time. We all know that in the last few years, there were many changes at RMC Saint-Jean; for the majority, they were good ones, and we have not seen the end of it. People close to me always said that change is inevitable; adapting to change is also inevitable. What makes you different than others is how you deal with change. The way I see it is: If you don’t like a situation, change it; if you can’t change it, change your attitude. If your efforts are not going in that sense, don’t complain! All this to say that change will always be part of our lives. I hope I’m not telling you anything new. Like my friend Mr. Morel says: “The formula is simple. The (R)esult equals the (E)vent + (A)ttitude, R=E+A. If you have no incidence on the event, by putting 100% of the attitude, you will obtain at least 50% of the result”. Not bad at all for those who think they have no impact on the results!

eVeritas: Do you have any advice?

Maj. Archambault: I will let you go with these words of wisdom. Everyday, whether you are wearing the uniform or not, live your life the same way you would climb a mountain. Look once in a while at the top; it will allow you to keep your goal in mind. But do not forget to take the time to appreciate the small moments during the climbing. Per Ardua Ad Astra (Through Adversity to the Stars). 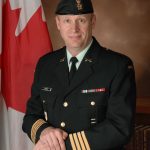