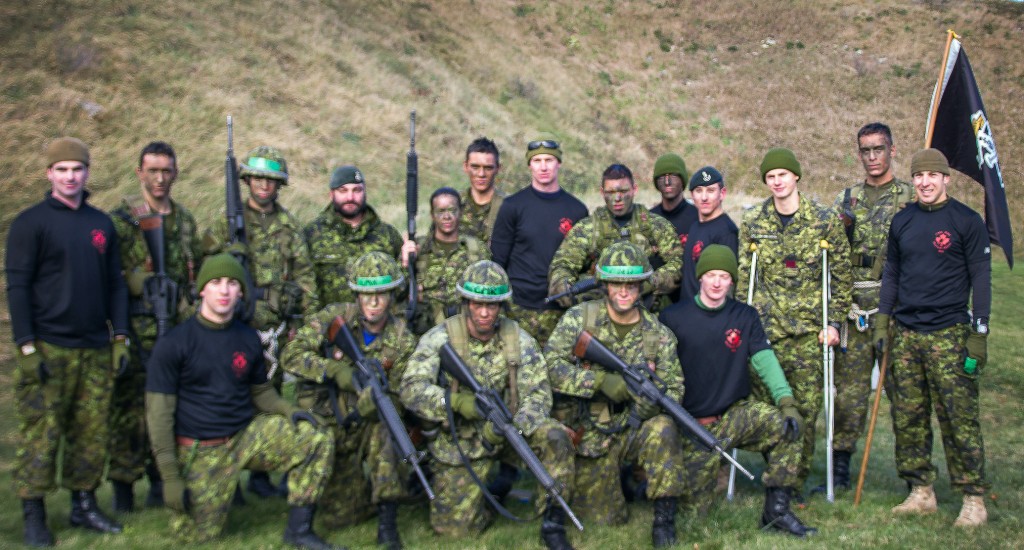 On Saturday the 15th of November, the Royal Military College of Canada hosted the 2014 Intramural Military Skills Competition. Five teams competed in the competition; four representing each of the RMC divisions, and one team composed of cadets from the Collège Militaire Royal St-Jean. Throughout the competition, each team of nine cadets would be challenged physically, mentally, and technically across a variety of stands. The stands would force the teams to display their military skills across several disciplines and would demand teamwork, cohesion, and most of all effective leadership on the behalf of the team captains.

On the morning of the competition, the teams were greeted with freezing temperatures and a biting wind that swept through the college grounds. But the enthusiasm of the cadets could not be curbed as they checked their kit and made last-minute preparations before the competition. The start times were drawn, and the teams departed at half-hour intervals, moving through the course as fast as possible, stopping at each stand to showcase their military prowess.

There were seven stands throughout the course. The first event tested the teams’ marksmanship ability. Four shooters from each team showcased their skills with the C7A2 rifle on RMC’s Small Arms Trainer. The Small Arms Trainer has proved as an invaluable training tool for the cadets at RMC, and each team in the competition was scored based on their grouping size and ability to engage targets at multiple distances. From here, the teams moved on to the assault boat stand, where they braved driving winds and the icy waters of Navy Bay. After completing the waterborne course, the teams all emerged wet and chilled, but pressed on and made it to the fourth event of the competition: the rope bridge. In this stand, each team was required to ford a gap between two trees using only rope and carabiners. However, the teams had to complete this feat whilst wearing gas masks, which severely hindered communication and tested the team captain’s ability to lead his squad. The following stands involved a Leadership Reaction Challenge, which tested each team’s ability to communicate and problem-solve, a weapons assembly stand, where the teams were required to assemble three C7 rifles and one Browning 9mm pistol as fast as possible, and the Twelve-Foot Wall. The Twelve-Foot wall is an iconic part of the RMC obstacle course and requires exacting precision and technique. The final obstacle of the competition was the OPI Challenge. This event sought to push the teams to their mental and physical limits and would exploit any weaknesses in communication, planning, and attention to detail. After completing the stand, the exhausted teams made a final push to the finish line, where they enjoyed a welcome reprieve from the stresses of the competition and congratulations from their peers and staff.

By the midpoint of the competition, it was clear that one team was competing at a higher level than the rest. The enthusiasm, drive, and zeal of the team from CMR St-Jean was noticed by all of the spectators and officials. They moved between obstacles with a perspicacious haste, and performed each task with confidence and meticulous expertise. By the end of the competition, it was clear that the team from CMR St-Jean would emerge as the victor. The victors were proceeded by the team from D Division, and third place went to the team representing A Division. The 2014 Intramural Military Skills Competition was an excellent showcase of military skill, and provided an opportunity for cadets from both military colleges to interact and share their interests in the pursuit of excellence. Much congratulation is due to the event’s organizer, OCdt Jean-Sebastien Otis, who facilitated the successful execution of the competition.

Congratulations to the RMCSJ cadets for their very impressive and well deserved victory.

The cadets of RMC are looking forward to hosting the 2015 competition and having another opportunity to exhibit their military skills. 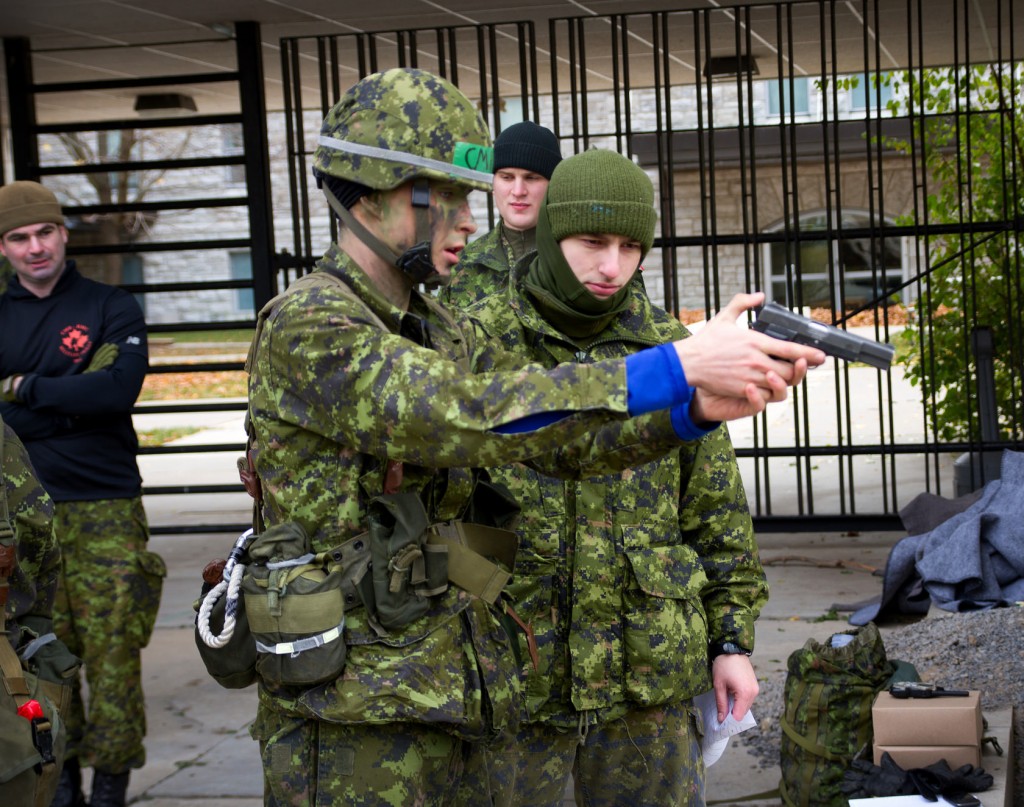 RMCSJ: It doesn’t need to be fun, to be fun.

The RMCSJ Military Skills program underwent a complete overhaul in preparation for the 2014 RMC competition.  Captains Dave Lacombe (23626) and Scott Blakie (23984) took ownership of the team and brought an entirely new approach to training and preparation.

Both of these former cadets were teammates on a number of championship RMCC Sandhurst teams which competed at West Point from 2005 – 2008 (approx). At one point they won the championship three years in a row. Over 5 years between them; 3 victories, 1 second place and one third place under their belts. Pretty impressive!

The plan was to institute a more rigorous, focused training program with the goal of winning the competition.  The new approach was not widely accepted, and all returning members of the team left the program.  The void was filled by a keen group of Preps and Juniors who had less than one month in the military.  Beginning with a group of roughly 40 OCdts, the team was cut to 20 following the initial Selection.  This group was further reduced to 15 after another month of training.  Discipline, perfectionism and pride were hammered into the team during every training session.  Any lapse in focus was quickly dealt with, and the team slowly developed the mentality required to be competitive.  Capt Lacombe imparted a fanatical commitment to training, and many late evenings were spent doing Gas drills, and tying Swiss Seats, bowlines and Figure 8s in the team lounge.  The team further benefited from the exceptional leadership of the Team Captain, OCdt Samuel Quenneville (27412), but suffered a major blow when the 2I/C, OCdt Van Den Hoeven broke his leg during training.  OCdt Harrison Day stepped up as 2I/C for the remainder of the training. 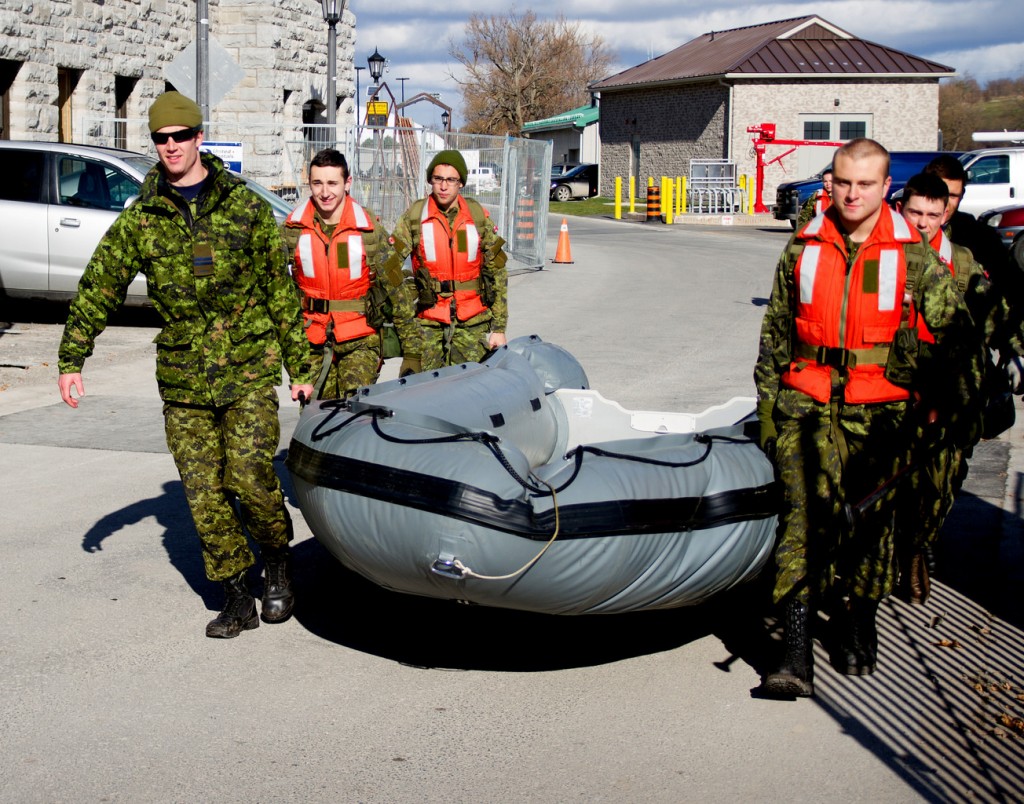 The team arrived in Kingston two days prior to the competition in order to familiarize themselves with the site and conduct additional training.  Initially the team was intimidated by the new environment and the bigger, senior OCdts at RMC.  With an average age of 18 and having less than 4 months in the military, they did not see themselves at the same level as the RMC Cadets.  Moreover, the wall was about a foot taller than in Saint Jean.  However, a trip to the far side of the point and wake-up talk reminded the team that their training had prepared them well for what they were about to do, and they were able to focus on their task.  It is worth noting that prior to arriving in Kingston, the team had neither shot the C7 nor assembled the 9mm pistol; both skills which were required at stands during the competition.  It is remarkable to note, that the team training NCO, WO Dan Holley trained the team to shoot near-perfect scores on the range in only two sessions on the RMC SAT range.

Winning the RMC Military Skills competition was the perfect result for the young team and a reflection of the effort they put into the training and preparation.  Despite their relative inexperience, they competed against and beat the significantly more experienced, fitter, and talented RMC teams.  It served as the perfect lesson for a group of new OCdts of the effectiveness of leadership, teamwork and hard, focused training.  It taught them never to be intimidated, and it taught them that it doesn’t need to be fun, to be fun.  It was a huge accomplishment for the 14 OCdts on the team and a lesson they’ll bring with them to Kingston in the coming years.

Both Captains Lacombe and Blakie have much to be proud of with this tremendous RMCSJ team accomplishment.

The RMC Competition was extremely well run and the team was grateful for the opportunity to compete.  These competitions benefit both institutions enormously and we are very proud to be competitive with the RMC programs.

Both institutions are heavily subsidized by the RMC Foundation who support these type of military skills competitions. This includes specialized equipment to successfully compete at the  Sandhurt event at West Point in the Spring of each year.

In a true spirit of sportsmanship, Capt Adam Bradley, a coach with the 2015 RMCC Sandhurst team had nothing but good words for the visitors from RMCSJ. ” The CMR team did a hell of a job and deserve a well earned victory!” This was echoed by 26099 Ocdt (IV) Jean-Sébastien Otis – designated 2015 RMCC Sandhurst Team Captain. “They had energy and passion that pushed them to the top.”

Coaches and competitors from all five teams met at the Cadet Mess following the competition. RMCSJ team captain, OCdt Quenneville was spotted ringing the “bell”  – laid out $500 on the bar (which all members of his team had previously contributed). Most of those of age – had a beer; the others a pop. Within minutes cadets from both institutions were sharing tales, in an atmosphere of fellowship.From all accounts – the visiting cadets were humble in victory and the Kingston cadets gracious in defeat.

A good time was had by all. Once again, congratulations to RMCSJ.

The makeup of the RMCSJ team: