The two brass cannons that are now housed in the parade square outside of the Naden museum were once prominently ensconced on either side of the Grant Block doors. From the very beginning, attempts (successful and otherwise) were made to fire the cannons, relocate them and steal them. At one time they were even used as a punishment whereby defaulters had to polish them. In fact the curator of the Naden museum remarked that they were so well taken care of that any distinguishing marks regarding its origins had been polished away!

Are there any readers who know the origins of these cannons? Someone mentioned it might be from HMS Victory. Do you have any other stories about the cannons’ adventures? I’d love to hear from you. Please email Royal Roads University staff person Karen Inkster at: Karen.Inkster@royalroads.ca 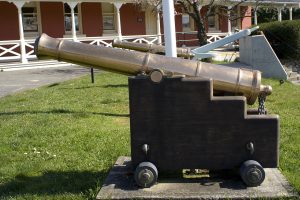 There were two brass cannons out in front of the cadet black, and someone said they had never been moved, because they were too heavy for people to life. And I figured out a very simple lift system by taking a couple of web belts and clipping them together, and getting about six guys, with our web belts, and we just slipped them underneath the cannon so that we had a bit of a lever to lift them with, and we carried them over and mounted them in the new cadet block in the foyer, then got the blocks that they stood on and they were quite light. Took it over, and the next morning when people got up there were two cannons that were facing them as they came down the stairs for parade and breakfast. And they were trying to figure out how they moved them, and said, “Alright, whoever moved them, move them back, and there are no consequences.” [laughs] So we did. That was part of maintaining sanity too. Thinking up and carrying out skylarks. And as long as there was no damage, no one was hurt, and you weren’t caught, they were acceptable.
Col (Ret’d) Jarrott Holtzhauer, 4595, (RRMC 1957, RMC 1959) 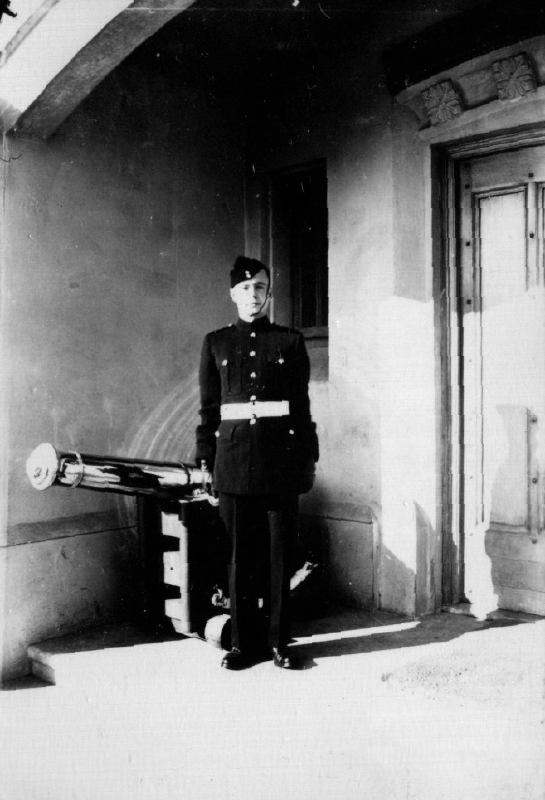 Polishing the Cannons
Oh, yes there’s two cannons that were on the main entrance in the Nixon Block. And I’m not sure the history of them, but they were there and they very well polished. After you’d been convicted of this major crime of not shaving or doing something that was of major significance, you were then given ‘defaulters’, so there was C class and all the rest of it – I managed to get on defaulters once. One of the things you had to do every morning was the college got up at 7, we got up at 6:30 – as I recall, it may even have been earlier – but you had to then get into gym clothing and do a run, and usually it was the Colwood run, and that was up to the Colwood Inn and around and back again. And that was fun too, because one time there was a snowfall, and as you know, particularly at that time Vancouver Island didn’t know what snow was. And us cadets from Ontario, we knew what it was all about. But we always laughed at all the cars slipping into the ditches and all the rest of it. But anyhow, one of the jobs after we came back, we were given some sort of a task. And generally speaking, it was to polish the cannons. They were brass cannons, and they were beautifully polished, they were always kept very well-polished. That leads into how did I get on the wrong side of the law. I was a junior cadet and we used to have to do our rifles. I was in charge of closing up the gunner’s stores after we’d cleaned our rifles and belts for the day. And I forgot to lock it. And that was an unpardonable thing and I went before my squadron commander, Lieutenant Rosenwald, and he gave me, I think it was one week’s C punishment. So I had to do this for a week. So that’s how I got on the brown belts and the gaitors, because I forgot to lock up the gunner’s store, and that meant putting the chains through the rifles because they were always under control and locking the door. And I didn’t do it.
Mr. George Skinner, 3316, (RRMC 1952, RMC 1954)

Firing the Cannons
The only [skylark] I was involved in was trying to fire one of the two brass cannons that were out here in front of Grant Block. We filled it full of homemade gunpowder, old trousers and things. All we got was a sort of Phooph as the smoky mass dripped on the pavement in front of the gun. We thought we were going to be ever so clever and hit the castle with a pair of folded trousers. Didn’t work out.
Capt (N) (Ret’d) Robert CK Peers, 199, (RCNC 1944-46)

A friend of mine and I had heard in the distant past that the cannons outside the Grant block had once been fired. And the story went that they were stuffed full of underwear and socks and various things, and flaming bits of clothing ended up in the trees. Nobody was sure when or where, so he and I decided that we’d do it. And we did. And sure enough, there was flaming clothes all over and smoke and so on.
Cmdre (Ret’d) Edward Murray, 4459, (RRMC 1957, RMC 1959) 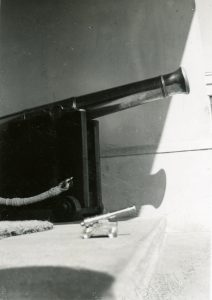 Stealing the Cannons
The University of Victoria was called Vic College when I was here. It hadn’t become a degree granting institution on its own for some years later until some years later but there were two fellows from Vic College that came one night and tried to take one of the cannons away but the darn things are really heavy. They were brass cannons and they must have weighed I don’t know what. Anyway they didn’t get very far. They were caught by the commissionaire, thrown to the tender mercies of the cadet corps which I remember being woken in the middle of the night by one of my seniors saying, hey, get yourself dressed and we’re over on the quarterdeck. It was two o ‘clock in the morning or something. They needed an audience. So I went over there and they had set stacking chairs up on the quarterdeck and they had a table at the front and so this would going to be a kangaroo court. This was a court martial for these two kids from Vic College and so they assigned a defense – and the cadet wing commander was sitting – it was his court so he was at the table. He had his scarlets on. The cadet officers all put on their scarlets and…these poor guys they didn’t know what was going to happen to them. Guys marched them in you know and they had their swords, the cadet escort had their swords on and the charges were read and these guys were, do you have anything to say in your own defense? Ahhhhhh and, okay, Guilty! And they started running them up and down the stairs. The stairwell in Grant Block I guess from the basement all the way up to the top – a good run. So they started running them up and down the stairs and the guys were pretty good sports. In fact they were so good sports about it – what could they do – but by the end the fellows were impressed enough by their gameness that it sorted ended up with everybody kind of shaking hands and – you did a pretty good job – you were really good about all of that. And the guys were nearly dead and so they were being given cans of pop you know – all that sort of thing – and then they were just sort of let go. I guess the option was to turn them over to the police for trespass. Not quite break and enter but I guess they could have been in more trouble but they probably would have preferred that! Looking back they were pretty uncomfortable for a while.
LCol (Ret’d) Richard (Rick) Young, 7454, (RRMC 1965, RMC 1967)

Photo of large and small cannon courtesy of Cdre (Ret’d) Richard. D. Okros, 3013, (RRMC 1950). He made the miniature cannon in machine shop.