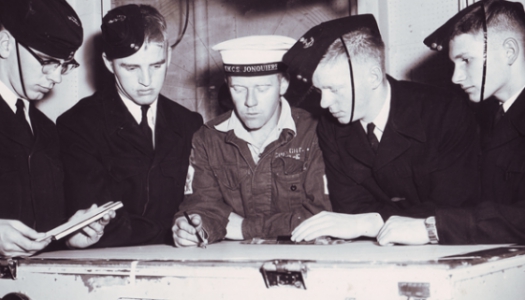 Royal Roads Military College had a reputation for being tough. And purposely so. The learning was based on teamwork, leadership and high standards to prepare cadets for career and life. Photo credit: Bradbury collection, RRMC fonds, RRU Archives

It always started with the click of boots in the darkness.

“I climbed off the bus late at night and I heard in the distance the click, click, click of boots on the pavement as our seniors marched in unison towards us,” recalls Ken Tanner, Royal Roads Military College (RRMC) Class of 1972, of the sound ingrained in every cadet’s memory.

“This sound of feet marching, drill boots coming up Neptune stairs,” echoes Laurie Gibbon, Class of 1988. “You can’t see them, you can just hear them.”

When the marching stopped the recruits got their introduction to life at RRMC. They had travelled across the country by bus, cattle truck, train, plane and boat. With diverse backgrounds they came together for what some described as the the shock of their lives. In an instant, the young men and women went from high school to university, home life to dorm life, and, most significantly of all, from civilian life to military life.

From 1940 to 1995, Royal Roads served as a training institution for military officers. Originally opened to train naval reserve officers for service in the Second World War, it was soon expanded to provide a military and academic education for all three military services. The campus is a unique learning environment, with heritage buildings, manicured gardens and acres of forest. “My heart is there,” says Kathryn Hodgson, Class of 1995. “That is the only place in the world where I have ever gone where I just feel calm.”

That didn’t mean the days were easy. The hours were long, with rigorous schedules for military training, academics and sports. Cadets, known as Royal Roads Roadents, quickly learned that the only way to get through it was together.

Of course, those who work hard play hard. Good-natured pranks, or skylarks, were common place as cadets looked for creative ways to blow off steam. It didn’t matter how tired you were, skylarks were another manifestation of the team approach to life and everyone took part.

In 1995, RRMC closed and Royal Roads University opened as a public post-secondary institution. A celebration is planned for 2015 to mark the combined 75th anniversary of outstandin education between the two institutions. The university also honours RRMC’s legacy through ongoing events and projects, including the creation of documentaries capturing what life at RRMC was like, aired on CHEK TV (Victoria) on Nov. 11.

The educational experience now delivered through Royal Roads University has evolved in many ways, but a dedicated adherence to teamwork, leadership and achieving more than you thought possible is still fundamental.

In many ways the targets they set at RRMC were unachievable, says Dean McFadden, Class of 1978. It wasn’t about the achievement, though.

“I don’t want people setting realistic targets. I want them setting targets they really need to stretch for. You may not get the whole way there but you will get lots of the way down that road. That’s a lifestyle,” he says. “That’s Royal Roads.” Source & Short interesting DVD

This article first appeared in e-Veritas: