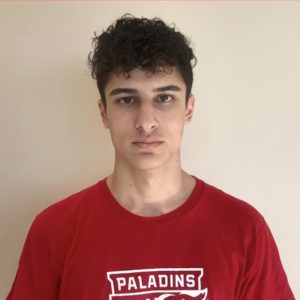 Kingston, Ont. (May 12, 2021) – The RMC Paladins are proud to announce that Niko Roumanis (Kingston, Ont.) has decided to stay in his hometown and play his university volleyball at the Royal Military College of Canada.

Excited by all that the College has to offer, Roumanis is prepared for the trials next year may bring.

“I chose RMC because I am looking to challenging myself and growing both as a person and as a volleyball player,” he said. “No other university can challenge its students academically, physically and mentally the way RMC can.”

Roumanis has been accepted into the Engineering program at RMC, where he will earn his degree en route to becoming an Electrical and Mechanical Engineering Officer in the Canadian Army. The new recruit will spend his time at the College as an Officer Cadet in the Regular Officer Training Plan, which is a fully-subsidized avenue into the Officer ranks of the Canadian Armed Forces.

“The opportunity to study at RMC is one that I couldn’t pass up,” Roumanis said.

Currently completing high school at École secondaire catholique Marie-Rivier, Roumanis played his youth volleyball in the Kingston Rock system as a middle, where head coach of RMC men’s volleyball, Steve Leknois, is one of the technical directors and had the opportunity to coach Roumanis at the U17 level.

“Skill-wise, he is quick to close his outside blocks and uses his intelligence when analyzing the play,” Leknois said. “Off the court, his leadership skills, I believe, will show up quickly.”

Fully aware of Roumanis’ skill level, Leknois is looking forward to having another local athlete on the team.

“Niko is not the first local talent to play for me,” Leknois said. “I try to bring in the local talent as I see them often, and it means so much when they agree to come to RMC.”

Just last year, Dean Taylor (Napanee, Ont.), who also played for the Kingston Rock, joined the Paladins roster, though his rookie season was sidelined due to the pandemic.