The Teacher Behind the Lab Coat – Dr. Weir Dr. Ron Weir started his military career as a Gunner in the Artillery Reserves, and then enrolled in the ROTP program and studied at the University of New Brunswick (UNB) where he completed his BSc in Chemical Engineering. At UNB, Dr. Weir distinguished himself by winning the Lt Governor’s Silver Medal in his graduating year. From a young age, Dr. Weir was interested in science and engineering and specifically chemistry due to the motivation of his high school chemistry teacher. His approach to knowledge is that it is a resource to be used to help mankind. He went to serve as a Combat Engineer and then was sent to the Imperial College of Science, Technology & Medicine (London, UK) as an Athlone Fellow where he completed his PhD. He returned to military service and was subsequently posted to RMC to teach engineers and scientists. He transferred to the civilian academic staff in 1975, retiring from the Canadian Armed Forces as a Major.

During his subsequent career at RMC, he has taught first to fourth year and postgraduate students in the subject areas of engineering thermodynamics, materials science and engineering, modelling and simulation, applied mathematics for engineers, and engineering chemistry. His first passion is teaching cadets and military officers. Dr. Weir not only provides students with an academic education, he provides all cadets with instruction in motivation and ethics, which are essential skills they need to succeed in their military career. Dr. Weir stresses the importance of cadets pursing an education in an academic program they like, since RMC is their opportunity to receive an undergraduate education and they need to make the most of it.

His research has focussed on the experimental thermodynamics of materials in the gaseous, liquid, fluid and solid state (including structure of solids) over a wide range of temperatures from –270 oC to +1000 oC. Dr. Weir oversees the operation of the nuclear reactor and is involved in non-destructive testing (NDT) and non-destructive evaluations (NDE) of Canadian Forces airplane wings. Currently, neutrons from the SLOWPOKE reactor are used to detect corrosion without damage to the specific part of the aircraft being studied. His service to RMC includes having chaired a host of university committees including Admissions 1980-2005, where he read over 10,000 files; Head of Chemistry & Chemical Engineering 1990-1995; and Dean Graduate Studies & Research 1995-2003 and again 2006-2007. It was under his guidance that the RMC postgraduate programme was expanded to permit PhD study, to enrol civilian graduate students, and to allow RMC Faculty eligible status with the Granting Councils. In the 2011 school year, he is the RMC Associate Vice Principal of Research. Dr. Weir received the RMC Teaching Excellence Award in 1993 and again in 2006.

Even with his numerous contributions to RMC, Dr. Weir has found the time to author and edit 5 books including “Birds of the Kingston Region”, and is the Senior Editor of the Journal of Chemical Thermodynamics (1993 to date), and the Editor of Pure and Applied Chemistry (2010 to date).

Dr. Weir is well known by his students for the wearing of a different light-hearted necktie for every lecture day. He started this after receiving comments about his “boring” ties on the teacher evaluation form. In addition, he is well known for the need to sleep far less than the average person. This brings him to his lab before 0500h each working day, and students often appear in his lab by 0600h for volunteer tutorial help. Dr Weir shares his passions with students and helps to mentor cadets into responsible officers. He challenges students to become critical thinkers and life longer learners. Dr. Weir provides examples in class, which are relevant to the three branches of the Canadian Forces, and conducts his class with an enthusiasm for learning that is nothing less than contagious. In a reflection, Dr. Weir states that his time at RMC has been too short, since “life goes by very fast when your having fun.” 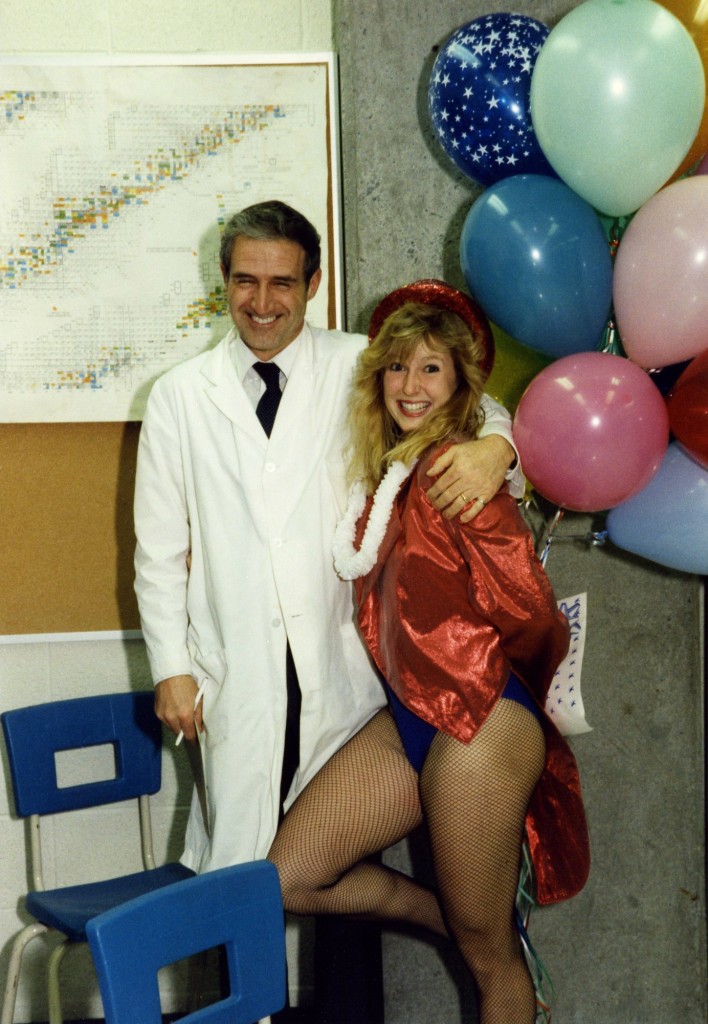 A tribute to Dr. Weir’s sense of humor: cadets arranged a “Send in the clowns” in Dr. Weir’s Thermodynamics class on his 50th birthday. (Contrary to what many may think after a skylark like that, all the cadets passed the course.)