After graduation, and after a lazy, hazy summer of French language training at RMC, we newly-minted naval officers of the MARS persuasion were dispatched to the Naval Officer Training Centre, VENTURE, at CFB Esquimalt. There we began Phase IV of MARS training, the first several weeks of which were spent in the classroom. We were instructed in the arcane art of finding one’s way across the trackless expanse of the oceans using observations of celestial bodies. We learned how to apply vector addition in pursuit of solutions to the relative motion of ships (relative velocity, or relvel as we called it). And we studied esoteric marine engineering concepts, like the effect of metacentric height on stability. And so on and so forth. All good stuff, but it was a bit on the dry side. 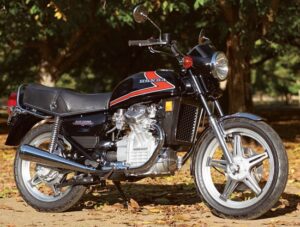 Pete Avis, Dave “Petit Homme” Marshall, and I spent a good chunk of our off-duty hours exploring the back roads of Vancouver Island on our motorcycles. We were a bit of a motorcycle gang, riding identical Honda motorcycles. Our interest in bikes and riding tended to flow over into classroom time; our instructors frequently had to steer us back from planning our next ride, to reducing a star sight, or solving a relvel problem, or figuring out how to deal with loll (not to be confused with LOL).

A few days before the Thanksgiving weekend, we were engaged in just such a non-naval discussion during a break between classes. Our navigation instructor, overhearing our conversation, and well acquainted with our two-wheeled pursuits, asked us what we had planned for the long weekend. Pete immediately piped up, “we’re going to ride to Calgary.” Petit Homme and I exchanged questioning glances: what the hell?  Our instructor expressed disbelief; Victoria to Calgary and back in three days? “You’re full of ****”, he opined. “You wouldn’t dare.” Well, Pete was never one to ignore a gauntlet thrown down. “We most certainly will ride to Calgary!” he asserted. Petit Homme and I were aghast, but it was too late, the die was cast; Pete had committed us. Our instructor pointed out that we would need to provide proof of our two-wheeled odyssey on our return. Pete assured him that we would.

Very little planning went into this expedition. Basically, we made sure our bikes had full tanks of gas and we each packed a small bag with a few articles of extra clothing, our rain suits, and little else. One of us may have even brought a map.

When Friday afternoon’s classes ended, we dashed back to our cabins and hurriedly changed into our riding gear. We grabbed our kit and headed out to the gate, where our trusty two-wheeled steeds awaited. With bungee cords we lashed our satchels to our bikes’ pillions. Then we mounted up, opened the fuel taps, switched on the ignitions, pulled in the clutch levers, and thumbed the starter buttons. The three engines roared to life, and after assuring ourselves that our machines were running properly, we snicked the transmissions into gear and headed out of the parking lot. We rode quickly through the city, then raced up the Saanich Peninsula to the BC Ferry terminal at Swartz Bay. The terminal is especially busy on Friday evenings before a long, holiday weekend, and motorists will often find themselves waiting for one or more sailings before finally boarding a ferry. Not so motorcyclists; two-wheelers were accorded the perk of jumping the queue and being first on the ferry, and first off. We arrived at the terminal barely in time for the 1700 sailing.

We parked our bikes at the forward end of the vehicle deck, and grabbing our kit, made our way up to the passenger decks. As the ferry wended its way through the islands and across the strait to the mainland, we imagined ourselves on the bridge of a warship, and practiced reporting contacts to the ship’s captain. “Captain sir, officer of the watch; ship bearing green three-zero, range three miles. Bearing is drawing quickly left; recommend we stand on”, etc., etc. Our fellow passengers must have thought we had escaped from the local mental hospital.

Once the ferry berthed at the Tsawwassen terminal, we were off the ship in a trice and headed east. We navigated the confusing tangle of Delta, Surrey, and Langley, until we finally found ourselves on the Trans-Canada Highway, headed for Calgary. The sun had already set, and night was falling swiftly, so we rode only as far as CFB Chilliwack, where we prevailed upon the base duty officer to put us up for the night in transient quarters. Spartan accommodation, to be sure, but it was free.

The next morning we were up at zero-dark-thirty, and back on the road before sunrise. There was mist in the Fraser Valley that morning, not so much as to pose a hazard to navigation, but enough to lend a surreal quality to our pre-dawn ride. As the sun rose, the mist quickly burned off, and it became a lovely day. Riding the twisty mountain highway on a motorcycle was fantastic, so much more entertaining than making the same journey in a car. Some time around noon, the sky became overcast, and shortly thereafter, rain began to fall. We stopped briefly to don our rain suits, and continued on. Our suits were pretty good, by the standards of the day, but they weren’t perfect. Rainwater tends to pool in the juncture between a motorcycle’s gas tank and saddle. And thus was revealed the Achilles’ “heel” of our suits; the seams in the crotch were not waterproof. But we were not dissuaded in our quest by a little watery discomfort. The only real inconvenience was having to wipe the raindrops off our helmet visors every few minutes.

We rode on for several hours, stopping periodically to refuel the bikes and ourselves. Shortly before sunset we stopped in Golden, BC. The rain had finally stopped, and the sun, breaking through the clouds to the west, bathed the western flanks of the Kootenay Mountains in, appropriately enough, golden light. It was spectacular!  Unfortunately, none of us had thought to bring a camera, so you’ll have to take our word for that.

We mounted up again, and carried on towards Calgary. Night fell, and unfortunately, the rain began anew. The temperature was falling, and the rain was mixed with sleet. These were not exactly optimal motorcycle riding conditions. And I became aware of an even more pressing concern; I could scarcely see where I was riding! All afternoon, I had been wiping my helmet visor, and the rough plastic of my rain glove had severely scratched the soft plastic of my visor. Unnoticed in the daylight, now that it was dark, the scratches were refracting the light from the headlights of oncoming vehicles, dazzling my eyes. The weak beam of my bike’s headlight did a poor job of illuminating the road surface ahead of me, and I could hardly see the lane markings. Opening the visor didn’t help, as the rain quickly covered my glasses. I dared not slow down, for fear of getting run down by the traffic behind me. Nor could I safely pull off the road; I couldn’t tell whether there was a nice, broad shoulder, or just a guardrail, and beyond that, the abyss…. 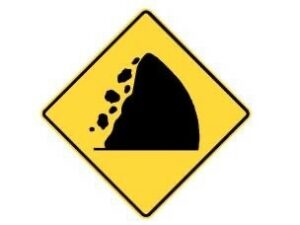 What I could see was the taillight of Petit Homme’s motorcycle ahead of me, and that of Pete’s motorcycle ahead of him. So I focused on those two ruby-red beacons, trying to maintain a more or less constant distance behind them. I braked when they braked, banked left when they banked left, and banked right when they banked right. And so we carried on for what seem like an eternity, but what was probably only about an hour and a half. (Later, I was to apprise my riding companions of my harrowing experience, chasing them through Kicking Horse Pass, all but blind. They were decidedly unsympathetic. They allowed as how I had been spared the sight of the “watch for falling rock” signs that had caused them much anxiety; there were so many on that stretch of highway that they thought it was inevitable that they would eventually run smack into a rockslide.) 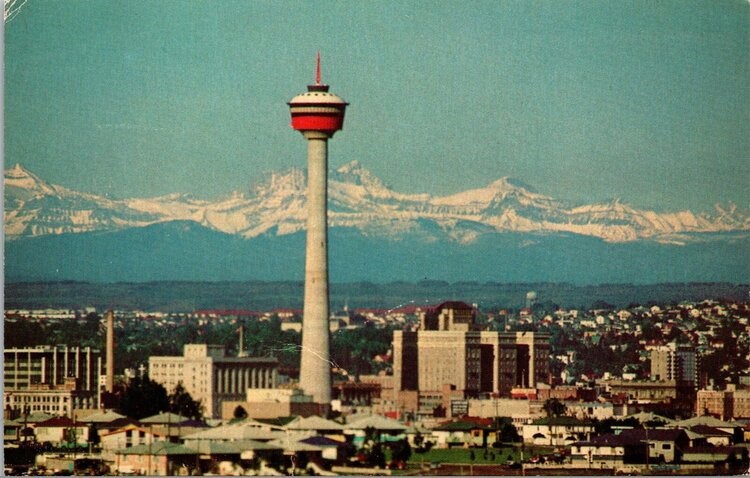 The precipitation finally stopped somewhere between Lake Louise and Banff; I could now open my visor, and see where I was going. Not too many kilometres further down the road, we rounded a bend, and suddenly we could see beyond the foothills the lights of Calgary on the horizon. With our destination in sight, we sped on, and covered the remaining eighty or ninety kilometres at somewhat extra-legal speeds. Somehow we found our way to CFB Calgary, and once again we threw ourselves on the mercy of the base duty officer, who took pity on we three sodden, disheveled, young naval officers, and found us a place in transient quarters. Merciful sleep assuaged our aching saddle sores!

Sunday dawned chilly and overcast, but at least it wasn’t raining. We saddled up, and set off to find breakfast. Our next task was to acquire irrefutable proof of our visit to Cow Town. (Of course, had we thought to bring a camera, we could have prevailed upon a passerby to photograph us in front of some suitable Calgary landmark, but did I mention how little planning went into this expedition?) After some discussion, we determined that a souvenir from the Calgary Tower would be just the ticket. Unfortunately, it being Sunday, the tower wasn’t open first thing in the a. and m. (This was 1979, remember.) To kill time, we went in off search of an open gas station to fill up our bikes’ gas tanks in preparation for the return trip. Then we returned to the tower and waited around until it opened. As soon as it did, we made a beeline for the souvenir shop, and picked out a beer bottle opener embossed with a likeness of the tower.

With the memento safely tucked away, we mounted our trusty steeds, and pointed them west towards the mountains, and the Pacific Ocean beyond. We wore our rain suits, not because it was raining, but because it was decidedly chilly, and the suits helped keep out the wind. It was after lunch by the time we got underway, so we only made it about halfway across BC before we stopped for the night. The next day was an easy ride down to Tsawwassen, where we boarded the ferry back to Vancouver Island. We were back at VENTURE in time for supper.

The next morning we were waiting in the classroom, souvenir bottle opener in hand. In walked our navigation instructor. He looked surprised to see us; I think he expected us to be adrift that morning (i.e., AWOL) through some navigational error or mishap. I suspect that he was also more than a little bit relieved; explaining our absence to his superiors would have been awkward. (It was contrary to the school’s policy for students to leave the local area, and even the broadest interpretation of “local area” would not extend to a two thousand kilometre motorcycle romp to Alberta and back.) Not wanting to let slip that he was happy to see us, safe and sound, he gruffly suggested that we must have got cold feet, and not left Victoria at all. That was when Pete, with a flourish, presented him with the souvenir Calgary Tower bottle opener. And that settled it. Our instructor was speechless, but only for a moment. He said, “You guys are ****ing crazy, you know that?” And then tucking away the memento, he carried on with that morning’s lecture. 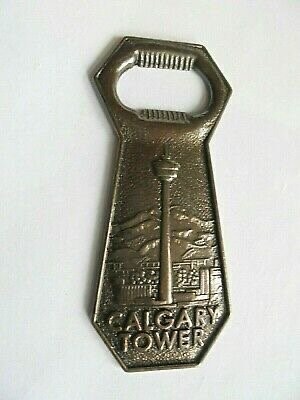